It’s a pretty typical story: A few years ago, I stumbled upon the work of Brene Brown, a social work professor in Texas, and fell in love. One concept in particular stuck with me, and comes to mind every year during the 10 days of Teshuvah–the distinction between guilt and shame. We’re often inclined to think of guilt as bad (Jewish guilt! Catholic guilt! Working mother guilt!) but Brown argues that guilt, actually, can be “adaptive and helpful,” forcing us to confront our actions, particularly those that are incongruous with our personal values. Brown separates guilt from shame, another beast entirely, that can be defined as “the intensely painful feeling or experience of believing we are flawed and therefore unworthy of love and belonging.”  Guilt is connected to our actions, while shame is part of who we are–in other words, guilt says “I did bad,” as opposed to shame’s message of “I am bad.”

Unlike guilt, shame does not have so many advantages. Shame can lead to unhealthy behaviors, addictions, and distractions. It is a source of disconnection and of separation. And the reason it struck me so strongly is that I work at the Organization for the Resolution of Agunot (ORA), a nonprofit organization dedicated to addressing cases of get refusal, or Jewish divorce denial. While most of our work is done behind the scenes, we are well-known for our more public campaigns against those who refuse to issue a get to their spouse. Be it a peaceful demonstration outside a get refuser’s home, or a social media campaign, Brown’s work made me question what we do–is this “public shaming” useful, or harmful?

Brown’s work suggests the dangers of shaming people, warning: “I don’t believe shame is helpful or productive. In fact, I think shame is much more likely to be the source of destructive, hurtful behavior than the solution or the cure.”  Shame, Brown argues, disconnects us–and that can make us dangerous. Brown’s thoughts echo the constant push-and-pull of ORA’s work–seeking to create consequences (legal ones!) for get refusers, while also keeping enough threads of connection to ensure that the recalcitrant party will not feel that he has gone too far, and can’t return. The more I thought about it, the more I realized that “shame” was probably not the best term to describe what we are doing at ORA. In any publicity, we are careful to keep the personal information minimal, to focus on the get alone, and to refrain from engaging in a larger character assassination. The get refuser whose case we are publicizing may be ten years behind on child support, or have served time in prison, or have a really, really bad fashion sense, but we keep that information out of our materials. Our focus is not on who they are but what they are doing–with the goal of inspiring change, and the expectation that change is possible.

Maybe a better term for our advocacy, I wondered, is “public accountability.”  We stand in front of people’s homes and rally not because we think they are evil, but because the behavior they are engaging in is hurting people, and we cannot stand by when people are being hurt. Get refusers are not monsters, after all, but people–and people are complicated. Sometimes as we stand outside their homes and rally, I wish I could just sit in the get refuser’s living room and speak plainly. I wish I could say, I see you. I see you, in your fear, and your grief and your anger. I’m not here because I think you are all wrong–I’m here because I believe you have the capacity to get this right, because it’s never too late. After all, just because we do bad, doesn’t mean we are bad.

One of the most beautiful messages of Yom Kippur is the possibility it holds for return and redemption for all of us–even those that have made terrible mistakes. There is a powerful story told about Rabbi Yisrael of Salanter, who once came upon a shoemaker, tying stitches and cobbling heels by candlelight. The rabbi asked the shoemaker what he was doing and why he was working so late, and he responded simply: “As long as the candle is burning, there is time to make repairs.”  This has become a central concept of teshuva, repentance, and it reminds me often of ORA’s work–speaking and advocating and following up even for the hardest cases, even when all logic would say to give up, because the candle is still burning.

Ultimately, if there’s anything Yom Kippur teaches us, it’s that you can’t escape accountability–you can run away like Jonah but the fish will still swallow you, you can ignore the unpleasant and uncomfortable, but on Yom Kippur, without food, or TV or fun outings, the truth of what you have done will confront you. What Yom Kippur practically knocks us over the head with is that life is short, and the things we do matter. Accountability is unavoidable in a world where time is limited, opportunities don’t always come again, and the way we treat others has an impact.  But what Yom Kippur also stands for is the idea that past actions do not have to determine the future—that even if we have done wrong for two years, or five years, or ten, the future can be different. For while the things we do may be bad, we are never fully bad. We may not be able to erase what happened yesterday, but tomorrow can be different. If the people of Nineveh, steeped in a culture of violence and idolatry, can change course, then so can each of our cases, even the most difficult ones. Yom Kippur, in the end, is about recognizing the humanity in all of us–the humanity that sometimes leads us astray, but ultimately has the power to reconnect us.

So as we prepare for Yom Kippur in a few short days, a few parting messages:

To our ORA supporters: Thank you for being there with us. You may think your $18 donation or Facebook comment is no big deal, but what you do really, really matters. It keeps us going.

To the agunot and agunim we work with: Working with you has taught me more about strength, resilience, and faith than I would have thought possible. Thank you for trusting us with your stories.

To the ORA Staff: This work can be difficult and devastating, and yet you show up, every day, with passion and compassion. You try Plan A and Plan B, and then, if you have to, Plan Y. You are amazing, and I am so privileged to work with you.

And to the 72 get refusers ORA is currently working with: We are here. It’s not too late, we promise. The candle is still burning. 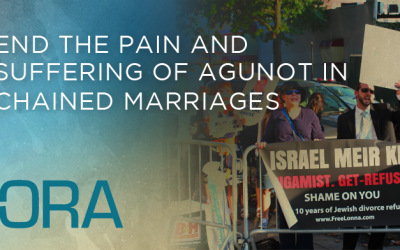 To support ORA’s work, click HERE or go to www.getORA.org.

About the Author
Keshet Starr is the Executive Director of the Organization for the Resolution of Agunot (ORA), the only nonprofit organization addressing the agunah (Jewish divorce refusal) crisis on a case-by-case basis worldwide. At ORA, Keshet oversees advocacy, early intervention, and educational initiatives designed to assist individuals seeking a Jewish divorce, and advocates for the elimination of abuse in the Jewish divorce process. Keshet has written for outlets such as the Times of Israel, The Forward, Haaretz, and academic publications, and frequently presents on issues related to Jewish divorce, domestic abuse, and the intersection between civil and religious divorce processes. A graduate of the University of Michigan and the University of Pennsylvania Law School, Keshet lives in central New Jersey with her husband and three young children.
Comments