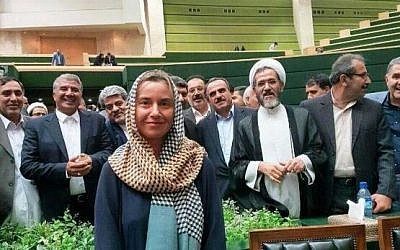 After 40 years of the life of the Islamic caliphate in Iran, today the entire world has realized that a canker called the Islamic Republic, which is indeed an Islamic caliphate that only carries the name of a republic, has overwhelmed the entire Middle East. The first to notice that canker and warn against it were the people of Iran and the political leaders of Israel.

In the past 40 years, the Islamic Republic has worked hard to circumvent peace between Palestine and Israel through various think tanks and academic researches around the world. After the Arabs and Israel got closer together, the canker reemerged in the form of the military intervention in Syria and Yemen and assistance to Hamas and Hezbollah militants in the Gaza Strip and Lebanon respectively. This is in addition to the missiles that the Iranian regime occasionally fires against its enemies in the region.

Through all its efforts around the globe, the Islamist regime is trying to confront Israel. That is why unilaterally blaming Israel for the situation in the Middle East will not do. Everyone knows that Palestinian leaders have repeatedly been offered various kinds of peace proposals. The Iranian regime and its allies in Europe try to pretend that it is Israel that is not willing to conduct peace negotiations. But it seems not conscious of the fact that the Arab-Israeli coalition stands like a rock against the Iranian regime’s disturbances in the region.

On the other hand, the Islamist regime tries to bolster its position through the European left. Some of the European left-wing politicians who have been hardcore Palestine advocates so far refuse to condemn the Iranian regime and its proxies’ rocket war on Israel. This is while as Alan Dershowitz says, it is time to break the silence on the abuses of the Islamist and the left on the Question of Palestine.

Truth is, as long as there is the canker of the Islamist regime in the Middle East which is backed by the left in the West, not only Israel and the Middle East but also Europe and the whole world will not see peace.