Churches in Israel will be full tonight, Christmas Eve. And they will be full not only of the faithful but of visitors, Jewish Israeli visitors who throng by the thousands to attend Christmas eve celebrations in churches throughout Israel. The phenomenon has been building up for more than a decade. Christmas Eve is when thousands of Israeli Jews gather for a taste of another religion, the religion that has been that of the “other” for hundreds of years, the religion that remains elusive and mysterious. 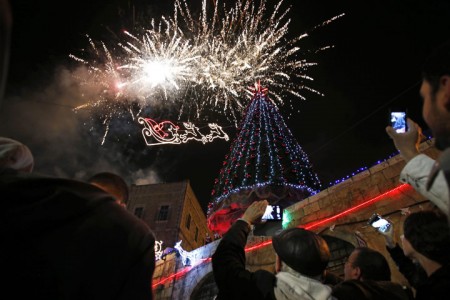 They will come in buses, going from one church to the other, or in small families. Some will go in and out, some will sit through long services.
It is hard to know why it has become the “cool” thing to do. Maybe because Christmas has become so commercialized globally that it has somehow crossed over from the purely religious to the cultural domain. Maybe it is part of the Israeli quest to break past the boundaries that our small country lives within, be they physical or mental. And maybe it is an expression of a spiritual quest that isn’t coherent or articulate enough, but nevertheless drives them to what they consider the heart of another religion’s life of worship.

Naturally, they are secular, mostly middle-aged and mostly Ashkenazi. But these are unnecessary generalizations. They are, above all, Israelis and somehow the visit to church on Christmas Eve is carried out in dialogue with their own Israeli and Jewish identity. Perhaps it is because most of them have only minimal connection to Jewish practice that they seek some vicarious experience in the rites of another faith. Perhaps they are so disillusioned by Jewish organized religion that they step outside its boundaries seeking an otherness that is somehow also an echo of something within. Just as the Israeli youth flood India in something that couples tourism and spiritual quest, so the older generation visits churches in a movement that is equally fraught, complex and fascinating.

The phenomenon is part of contemporary Israeli reality. I see no point in arguing with it, nor is it for me to legitimate it. It is what it is. But perhaps the following story can provide a counterpart to this experience, and with it a teaching on sharing across religions.

Several months ago, there was a gathering of rabbis and Catholic hierarchs in Israel. One of the participating Cardinals, one of the most important Church leaders globally, is a friend of mine. I asked him if in the course of his numerous visits to Israel he had ever visited Safed. He had not. I invited him to come with me, during a break, so he could experience a dimension of Israel he had not experienced previously. He gladly accepted.

I could not imagine the depth of the encounter – both his encounter with Safed and its spiritual life and the encounter between us, that was made possible thanks to what ended up being a joint pilgrimage to one of Israel’s holiest cities. The Cardinal had no interest in the tourist shops that dotted the entryway to Safed. Nor did he care for any of the art galleries I suggested we visit. He wanted one thing and one thing only – to visit the synagogues.

Our first visit was to the Caro synagogue, the place of prayer of one of Judaism’s greatest legalists and mystics, who authored the code of law that is universally practiced, since the 16th century. The experience was stunning. It was, so he reported, a moment of union with all the people who had prayed there, and with all their prayers. He did not know them, nor did he know the content of their prayers, but he was able to connect with them, as a column of prayer rising to heaven, and to be one with it. Difference in faith mattered little. Prayer was a reality, and its buildup over centuries was, to him, palpable. 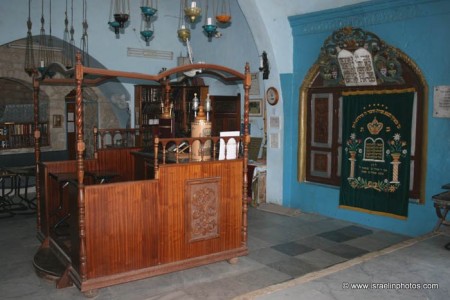 We went from synagogue to synagogue, covering all the most important ones. The sense of spiritual engagement deepened and along with it also the sense of personal bonding. A Newlywed Haredi couple from the United States was fascinated by the guest and by the tales of his family’s suffering during World War II. Natural human sympathy and connection (I suppose he could enjoy it in a special way under the cover of anonymity, when he was not “Your Eminence”), enhanced the sense of togetherness that took place in all simplicity. A hassidic rabbi received us in his home with great warmth, knowing who my guest was. The teaching he shared with us spoke across traditions – God’s providence ensures that under all circumstances we find support and we must never lose hope. How it tied to Lag Ba’omer is irrelevant. The teaching transcended religious difference. So did the gaze of the eyes. “He has good eyes”, commented the Cardinal.

On the way home we spoke about the spiritual quest. There are ways in which the spiritual quest takes us beyond the boundaries of a particular religious tradition. If you really are a seeker of God, you can find Him everywhere, beyond religious difference. God comes first.

What Would The Cardinal Say to Israelis in Church?

I can only speculate on what the Cardinal would say to the Israelis who throng to Church on Christmas Eve, but this speculation is founded on knowledge of the person that is solid enough to make the following more than plausible. He would begin by affirming the universality of spiritual life and how it can be found everywhere. He would speak of how having firm roots in his own tradition, he was able to receive something from another tradition and the sense of unity he felt with it. I know he would never dream of inviting the Israelis to opt for Christianity. On the contrary. He would invite them to follow a path similar to his own – deep engagement with their tradition as a basis for discovering the deeper bond that unites all believers; the practice of deep connection to the lives and prayers of the people they see in Church, a joining with their deepest selves, based on a common approach to God.

I don’t know how many of those Israelis who attend Church tonight could accept these recommendations. They require having a prayer life of your own. They are also aided by personal connections and exchanges, which the Israelis going in and out of churches will likely not have. And yet, it remains a model for the future, a model of genuine human and spiritual encounter, that uncovers the deeper spiritual commonality and the universal spiritual quest, without compromising one’s identity. Perhaps, he would add, they can open up to some spiritual dimension they are lacking in Judaism through their Church visit, and then rediscover it in Judaism.