The Egyptian brokered ceasefire Israel honored but Hamas did not is where it belongs, in the trash. It was supposed to have been in effect as of 9 AM Israeli time, and Israel held its fire for six hours while Hamas fired barrage after barrage at Israel, at one point targeting Israel with over 50 rockets in the space of one hour.

So Israel has resumed air strikes. 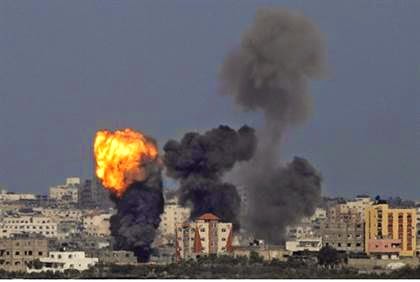 The entire idea of a ceasefire with Hamas was a huge mistake as I pointed out yesterday. Fortunately for Israel, Hamas is rescued Bibi Netanyahu and the members of the security cabinet who voted for it by refusing to accept it.

At this point, Foreign Minister Avigdor Lieberman and Economics Minister Naftali Bennett, the only ministers who voted not to accept the ceasefire, are looking a lot more attuned to reality than those who voted for it. Lieberman is now calling for the ground operation to get under way and for Israel to retake Gaza…something the Army largely agrees with, by the way, to make sure the tunnels are taken out properly if nothing else. So do I.

Let the Army win. Every indication is that they’re frustrated at the delays and ready to move.

Israel can then arrest or kill the Hamas and Islamic Jihad fighters, take away their weaponry,  and finish this once and for all.Hamas cannot be left with their weaponry as a threat in Gaza.In fact, Israel needs to annex it as part of a complete, unilateral redrawing of its borders and a total separation from  the Arabs who identify themselves as Palestinians.Let them have a state in part of Area A, and be done with it. And let Mahmoud Abbas know that any acts of aggression, including lawfare will have severe consequences.

It’s time it was acknowledged that those of us who opposed the disengagement and saw the ripping away of 8,000 Jews from their homes as a huge error were entirely correct about that. Everything we predicted has come to pass, and all Israel has paid the price for  that immoral act.