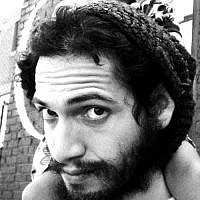 The Blogs
Yoseph Needelman-Ruiz
Maggid of Cannabis Chassidis, PopCartoonKabala
Apply for a Blog
Advertisement
Please note that the posts on The Blogs are contributed by third parties. The opinions, facts and any media content in them are presented solely by the authors, and neither The Times of Israel nor its partners assume any responsibility for them. Please contact us in case of abuse. In case of abuse,
Report this post.

The past few weeks, years and epochs have renewed a mighty and unyielding spark of Nationalism amongst the Jewish people, both religious and secular, even in the context of our modernity and market liberalism (Right-wing as well as Psuedo-Left/Centrist) and faith in ways we are proud of and can believe in called “us”.  It’s what so many of our songs, parties, weddings and funerals celebrate and rally around, it’s what lets us all feel really good about ourselves, just for being who we are. “These are your gods: Israel!”

It’s part of what got us the Government we have now in Israel. Some secular people joined with the most aggressive of Religious Zionists to bring the most right wing, “religious” government in years.  The major classical Left-ish/Centrist party lost even presence in the Knesset at all. Why? Because even Israel’s weak Nationalist Centrist/Secularists believed in “us” more than “them” (THE ARABS), and if Jews are going to believe in Jewish Supremacism at all, why not go all the way?

It was worse for a while, in the last few years. Remember? The president of the United States of America evolved into a bit of a messianic hero in many of our communities, for and amongst many of our families and friends. Wasn’t that strange? He wasn’t so much a Tzadik or a Talmud Chacham in the traditional senses that one might have once thought a Jewish Messiah would have been held to, because the truth is, we all just want encouragement, and a regent who tells us we’re great and basically encourages us, as a community or as a conceptual composite entity is super-great, and maybe all we need to bribe our consciences away from, say, caring for the poor and making sure people can live somewhere. Or worse: just encourage us to do whatever we want, no matter how awful or selfish, as long as we were smart and had money, or were just us ourselves. Gross.

The horror and challenge of Nationalism amidst our Jewish community and Torah world is so remarkable, in light of how genteel and anathema it might have felt, generationally, in the context of Jewish communities. But this would be to forget everything: The whole Torah is very nationalistic, isn’t it? Even an iconoclastic Judaism of anti-Pharoah, anti-idolatry liberation-monotheism gives way to an Israel defined classically and expansively as a people. The jealousy of the softer nationalisms towards Zionism for it’s ultimate accomplishment, and legal, legitimate secular-religious ethno-state, with a fundamentally supportive popular and traditional theology, as well as sense of cohesive identity.  Why not embrace Nationalism and all its promise of distinct existence and triumphal unique capacity? Specifically it’s natural effectiveness in rallying and organizing, around the familiar, aesthetic priorities so much tending to supercede moral ones.

This ease and comfort, this justifiable and tacit acceptable: “Behold, your gods Israel” the lie sang in the Biblical Northern Kingdom of Israel in the temples of all under the iconic bull-flag of Ephraim that rebelled against the universal aspirations of David and Solomon/Shlomo, the transcendent internationalist utopianism implicit and inherent in the concept and practice of the Holy Temple in Jerusalem: a mythic capitol for anti-nationalism.

Jay Michaelson once argued that Passover/Pesach was the reason Jews, regardless of their degrees of religiosity, have tended towards the progressive. Pharaoh-slavery is the villain, and the slaves longing for freedom and the end of their oppression– very inspiring. The problem of course, and the reason cinematic adaptations of the Torah focus only on the beginning of Exodus and don’t really know how to deal with the atrocities of Numbers/במדבר is the other thing: Jewish Nationalism, as expressed most effectively and rallied around most popularly, in the context of modern Chanuka.

Long decried has been the liberal “modern” dissolution of Hanukkah kitch into normcore American popular secularism. It’s just our Christmas? No! It’s about not losing your identity, and practicing the way you want to be! What is Nationalism if not just doing what you want, and being allowed certain privileges of pure violent expression or whatever your traditional privilege is, because of who you are, and thus, get to be. I appreciate this, in my Israel: I once went to prison for weed stuff for a while, and there, I got to learn so much Torah, my favorite thing to do. Not everyone gets to be that person in that prison. But resistance to compulsion, to the modernity that puts all our sacred lands and resources on the market, is so natural, so popular, and so resonant. This is why it’s hard to talk about, or describe, so we needed an operation Birthright just so the kids could feel it: This is your gods, Israel. This is why being part of an army makes us so much stronger and more beautiful.

“Anti-Imperialism is where the Left goes to die” — Spencer Sunshine, noted scholar of far-right activism in a fundamentally antifascist context. He’s been working for years to keep resistance to actual fascism and actual white-nationalism from devolving into casual antisemitism, a challenge in that so much of the left impulse towards social justice language and organizing is so rooted in either Christianity or Islam, both of which relate to justice issues, to whatever degree, through a filter of similarly casual historical rhetorical antisemitism. This is a fundamental part of rhetoric since Hellenism became popular, the Jewish relationship to thought, responsibility and ethos so radically and cognitively impactful because of the violent eloquence of our Torah: ultimately so resonant and meaningful that every subsequent literary religion around it had to frame it’s ostensible higher and more evolved, or at least more human, natural and accessible values system in opposition to it. In much the same way that the Torah frames its theological and moral innovation and standard in hostile contrast to Babylon and Egypt, as well as Phoenicia and Philistia.

How to overcome? All nationalisms, on some level, depend on Jewish Nationalisms for legitimacy: a bible that established the rule of international morality, inherent in the world and its way, somehow winds up identified with a cosmic coherent sense of collective self and purpose– what can a utopian Davidic folly do to overcome the very fundamental perspectives that our community depends on? It’s the trust in the good that we are to already be the good that makes us all better, by just being right with other people. Why should King Solomon trust his wives and their gods, when the custom was really so much to avoid that kind of thing? Because that’s what the Torah is and opens doors to, but only when understood.

This is the degree to which the highest aspirations in Judaism, it’s messianisms, kabbalae and hasidic revivals, have tended to identify with Judah, not Ephraim, the idealistic open and secure lion, not the obnoxious territorial bull. Because truth and humanity are so ultimately accessible, real, honored and acknowledged, the real and holy that other people are, whether we know them or speak their language or not.

It’s just been too easy traditionally, or maybe just too hard in too many other ways, to remember the human soul that we are responsible for, our neighbor everywhere. But it’s also hard to care for our neighbor nearby. Every time someone we know is killed, every time someone we don’t know is– someone we don’t identify with, or know is the real problem. But this is not what the sacred is for, beyond the Martial religion of nation and flag, every people with their own and every country too– the sacred asks better of us that just this.

This, traditionally, is why Hanukkah is so much more about light than about Maccabees or antisemitism. It IS our Christmas! The Talmud in Avodah Zara makes clear that the universal holiday of Adam and Chava/Eve IS the winter solstice, eight nights before and eight nights after, from December 21st. Adam and Chava, the very first winter, noticed the days getting shorter and the nights getting longer and got scared that this was the end. So they prayed and cried for Eight Days until the saw the nights get shorter and the days longer and called a holiday for all generations, which every nation set to it’s own deity for it’s own reasons. כן תהיה לנו.

We are special and we’re not and it’s important to feel good about being alive, and we all do. And I feel like part of the blessing of every next Hanukkah, every next Novogod, every Sylvester, every Christmas ממש is how much more the world can see itself in each other, and all of us humanized and treasured and forgiven in the light of each others candle. Yay for a Torah and an identity that lets us be big enough not to worry about who we are, and who gets to count, as if the world wasn’t so much more full of Us than we can ever know.

About the Author
Yoseph Needelman-Ruiz a.k.a. Yoseph Leib Ibn Mardachya is the author of "Cannabis Chassidis: The Ancient and Emerging Torah of Drugs" (Autonomedia press, 2012) an epic devotional study of Cannabis and other ethneogens in Judaism and its heresies throughout history, into super-modernity, in the hopes of passing on a useful counsel with regards to their use beyond "do" or "don't." He is currently working on a book about Pop Cartoon Kabbalah, and alternates between leading services and sermons in Williamsburg Brooklyn at Cong. Beth Jacob Ohev Sholom, and living in Israel's Elah Valley.
Comments