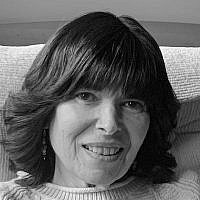 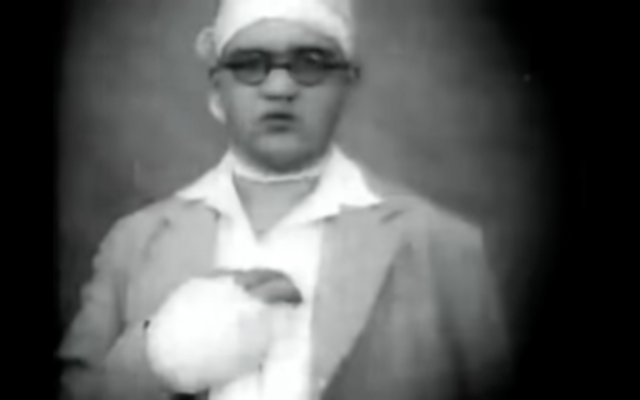 Illustrative. An injured man from the 1929 riots. (screenshot, YouTube)

I furiously scribbled notes on the back of a restaurant placemat as my mother and her sister, my aunt Bea, related stories about our family. Most of the people I had never met. But they were family, nonetheless, and I conscientiously recorded every word, struggling to keep up with their rapid-fire recollections.

Recently, I revisited the genealogy I had long ago constructed from those placemat scrawls after a cousin expressed an interest in the family. Looking at my handwritten diagram, I read aloud an entry to my husband about the father of a man he once worked with, Yehuda Harbater.

“Look at this — under Moe Harbater, it says, ‘Chevron Yeshiva 1929… stabbed… cut off two fingers’ and ‘Haganah.’” Moe was the husband of my mother’s cousin Dossie (Hadassah) Harbater, who lived in Far Rockaway and attended our wedding. I had never met her husband, Moe (Moshe), though I certainly knew the name.

“Impossible!” my husband protested. “How could the same person be at the Hebron massacre in 1929 and also have served in the Haganah?”

Sure enough, Alan went online, and within 30 seconds, found a video of Michael Harbater, Moe and Dossie’s son, describing his father’s experiences in both Hebron and the Haganah.

I must have watched the video five times. Though I had never met either Moe or his son Michael, I was fascinated by the story. Indeed, who wouldn’t have been?

As Michael related, his father came from a well-to-do, religiously observant, and Zionist family in Boro Park.

In 1929, when he was 17 years old, he wanted to learn in the Mir Yeshiva in Poland. However, his mother, fearing pogroms, suggested he go to Israel (then mandatory Palestine) instead, where under the British, he would be safe.

And so it was that Moe Harbater found himself at the Hebron yeshiva on that fateful Shabbos when the Arabs decided to attack. As Michael related, on Shabbos afternoons, the students would eat lunch at the homes of various Hebron residents. When the riot started, Moe and his hosts had barricaded themselves in the interior of their house in a room with doors on either end. Simultaneously trying to break in from both sides, the Arabs used long, narrow sabers to pierce the thin-paneled doors of the room. As the blades came through the door, Moe, wielding a pipe wrench, tried to cut them off. On one such attempt, he had raised his hand over his head to slash the blade, when the Arabs, bursting in from behind, caught him on the backswing and cut off his fourth and fifth fingers. Having thus rendered him defenseless, they stabbed him several times in the back and lacerated his scalp.

Upon hearing of the attack, Moe’s father, then in Kiryat Moshe, near Jerusalem, urged the British to send a convoy to stop the carnage and evacuate the survivors. He offered to pay for the expedition. The British refused. When the evacuation finally took place the next day, Moe was not even triaged. They felt he didn’t stand a chance of surviving.

But survive he did. And upon his return to Boro Park, he succeeded in doing what he had originally planned — he went to learn at the Mir Yeshiva. Fortunately for him, as it turned out, economic circumstances forced him to cut short his studies — he received smicha (ordination) from Rabbi Eliezer Yudel Finkel in less than three years, and returned to Boro Park in 1932, well before the Nazi takeover.

So much for the first mention on my placemat genealogy. As for the second, Moe settled with his family in mandatory Palestine, where he became a farmer, tending the family’s orange grove and vineyard.

During the battle of Latrun in 1948, now 36 and married, he could not serve as a combat soldier because of his hand injury, but he was able to carry stretchers. During the ferocious three-day battle, he crawled into the fields after each grisly skirmish to retrieve the bodies of his fallen countrymen.

Call it Hashgochoh Protis, but the injury on that fateful Shabbos in 1929 may have saved his life.

About the Author
Marjorie Ordene is an integrative physician and nutritionist. Her essays, short stories, and poetry have been published in various magazines and anthologies including Tabletmag.com, The Sun, Lilith, Op-Med, Aish.com, Ami Magazine, and Mishpacha Magazine.
Related Topics
Related Posts
Comments