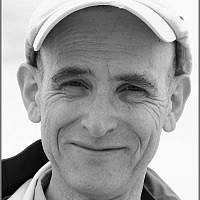 The Blogs
Dan Shaham (Schwenk)
Apply for a Blog
Please note that the posts on The Blogs are contributed by third parties. The opinions, facts and any media content in them are presented solely by the authors, and neither The Times of Israel nor its partners assume any responsibility for them. Please contact us in case of abuse. In case of abuse,
Report this post.

(This article is reprinted with permission from Tikkun: “The Prophetic Jewish, Interfaith & Secular Voice to Heal and Transform the World.”)

The latest war in Israel operation Shomer Hachomot (Walls Guard) has been both difficult and rattling, and its passage necessitates a discussion beyond the political realm.  The following article is from a Jewish-religious perspective, with a clear tint of the moderate Beit Hillel, and touches upon not only the problems but also upon the direction of hope and change.  I will start with the picture that is, in my mind, at the center of Israel’s psyche, and it explains the intense emotions that each conflict arises within Israeli Jews.

In the summer of 1977, I visited the Anne Frank home in Amsterdam, Holland.  A few months before, I had finished my Army service as a combat Signal-Corps Lieutenant.  I looked around and said to the murderers of Anne Frank, come now and let’s talk, when I have arms in my hands and I am part of a strong army.  In this context of the Holocaust, I was also reminded of the picture of the Jewish child in the Warsaw Ghetto raising his hands.  I said to myself, you will never raise your hands again, neither you nor your friends.  This is precisely my role, and the role of my comrades in the IDF, to make sure that not one hair of yours will drop.  You are now at the center of our attention, and as long as our sword is sharp, and our hands are trained for war, your well-being and your friends’ are secure.

Since the Six Days War, the whole of Jerusalem, including the Temple Mount, have been under the sovereignty of the State of Israel.  The majority of the Rabbis, including the Chief Rabbinate, are of the opinion that it is forbidden to enter the Temple Mount because of the sanctity of the Temple and the existing doubt regarding the exact place of the Holy of Holies.  From the archeological and mythological perspectives, the common assumption is that the Holy of Holies is where the Al Aqsa Mosque is.

In the Jewish prayer we say “because of our sins we were forced out of our country.”  We are waiting for the arrival of our Messiah, and upon his coming we will be blessed with the building of The Third temple.  We repeat this wish every year at the conclusion of the Passover evening.  Until our Messiah arrives we are obligated to act with extreme caution regarding everything that has to do with the Temple Mount.

The Temple Mount under Israel’s sovereignty, but it is possible to protect the security of the place by a strong peripheral defense without the need of having armed soldiers and police officers on it.  It is inconceivable that any weapon, not only be present on the Temple Mount, but that it would be used inside the Al Aqsa Mosque, where the Holy of Holies might be.  The detonation of stun grenades, as it has happened lately inside the Al Aqsa Mosque at the end of the Fast of Ramadan, is not only a terrible affront to the feelings [you can cut the feelings] of devout Muslims all over the world, but it is an inconceivable teasing of God.

One of the greatest lessons of the story of the Exodus is that it is strictly forbidden to try God.  In the same vein, when we are celebrating Hanukkah every year, the celebration of freeing our Temple from the foreigners who defiled it, is not of the impressive military achievements of the Maccabi, but the adherence to the spirit of God (Zechariah, 4, 6).

The hotheaded among us have run to hurt and still want with all their heart to instigate the Gerim, (the non-Jews who live with us).  They do not heed the warning of our forefather Jacob after his sons, Simeon and Levi, chose the worst possible solution by killing the dwellers of Shechem for the rape of Dinah, their sister.  Jacob, a hero in spirit and body, who like his father and grandfather was a wealthy and powerful man, understood the limits of his power, and knew that only the way of negotiation and good neighborly relationship, would ensure the safety and survival of his family (Genesis 34, 30).  Jacob’s anger was so intense that even before his death he did not bless his two sons but cursed them and wished to distance them from his memory (Genesis 49, 5-6).

R’ Akiva was right, there are two opposing forces in this world, one is the power of love and the other is the power of hate.  Love builds and develops, hatred destroys and annihilates.  Simeon and Levi chose the way of hatred and destruction, while Jacob chose the way of love, of looking for solutions of peace, albeit when the heart forcefully calls for revenge.  We can see echoes of Jacob’s political wisdom in Nelson Mandela’s solution for this country after years of bloodshed and tribal hatred, by establishing the councils for Truth and Reconciliation that investigated the crimes of the past.  Mandela preferred to break the vicious circle of revenge, to create lines of communication that would get the truth out, instead of continuing the bloodshed.  Senator Mitchel and the leaders of warring parties in Northern Ireland reached a solution with the “Good Friday Agreement” by agreeing on a peaceful solution and political cooperation.  We have to learn from history, and see that after every war there is The Day After.  We have to take action in order to bring on a peaceful Day After, to fight for it with the same ferocity that we fight in war, because the goal is the same goal, to survive and stay alive, but the means are entirely different.

Every year we are obligated by God to do “Teshuva” (repentance).  We stand before God in the Ten Days of Repentance and beg for our lives.  We know that the justice is right and we bow our heads in submission.  In this fateful hour we have the opportunity to change our ways.  The road is open before us to communicate with God and to lay bare our soul before Him.  All that we are asking for is another year, another signature of God next to our name in The Book of Life.  In this ancient ritual there is deep humility and age-old wisdom.  Reality, and especially the one between a human and his or her fellow human, is not something rigid, but is changeable.  We have agency to act within the inter-human reality, be it between ourselves, or between us and the Gerim.  Our human relations, which are at the heart of the “Teshuva” process, are up to us to change.  Therefore, it is obligatory on our part to search our souls every year and to repair whatever needs to be repaired.

The prophet Zachariah (14, 16), prophesied that every year the various nations who survived the battle for Jerusalem, will come to bow before God and celebrate Chag Hasukkot (the Feast of Tabernacles).  Isaiah prophesied that Jerusalem would become a spiritual center where people from all over the world will come to hear the word of God.   R’ Moses ben Maimon (Maimonides) taught us, the coming of the Messiah is dependent upon us.  R’ Moshe Kret of blessed memory taught me that according to the Talmud the Shechina (the Divine Presence) is between people.  Moses has taught us (Deuteronomy 30, 12) following the Jewish Faith is not something that is out of reach, but something that is close to us (Ibid, 14).  It is within our power to change the difficult reality in which we live in Israel among ourselves, between ourselves and the Gerim, and between ourselves and the nations that surround us.  There is not a stone to be unturned, no distance that cannot be covered, no effort to spare in order to fulfil the prophecy of our prophets and our teachers’ legacy.  With God’s help, we will overcome.

(The writer wants to comment that there is no relations between him and Ambassador Dr. Dan Shaham)