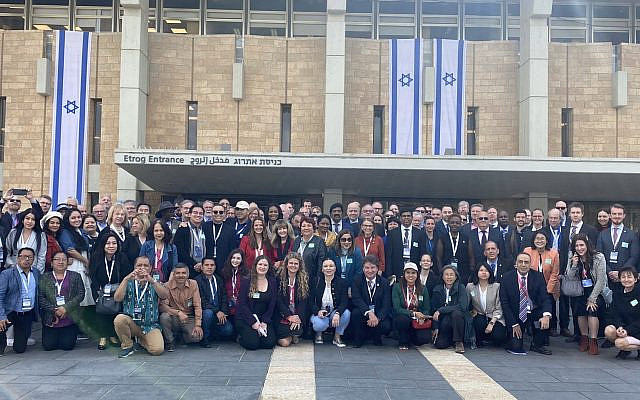 This past week, the Sixth Christian Media Summit was held in Jerusalem under the auspices of the Israel Government Press Office (GPO). While the fifth Summit was held virtually in 2021, this was the first Summit in person since 2019. As an Orthodox Israeli Jew working among Christians, writing for several Christian web sites, and hosting the Inspiration from Zion podcast on a major Christian media network, I found the Summit substantial, well organized, inspiring, and tremendously important.

More than 150 Christian journalists from dozens of countries participated. Many were veterans of the Summit and other visits to Israel, and some were in Israel for the first time. They came from many different countries, speaking many different languages, but the common thread was their love and support for Israel, and deep desire to learn more and connect with the Land, the history, and the people.

As a tax paying Israeli citizen, I was thrilled and grateful to see our government making this important investment. The GPO staff organized and implemented the Summit seamlessly, albeit juggling last minute schedule and other changes.

The fact that the Summit didn’t’ take place in person for three years due to COVID, also inoculated the participants from much of the political turmoil that Israel has been going through, with five elections in under four years. Participants who were connected to Israel of course knew what was going on, but from afar. Many didn’t have their hand on the pulse of all the personalities, parties, details, and nuances as a consequence of the political instability, leading to many ripple effects throughout Israel in multiple ways. But they cared, and being back for the first time in person was meaningful and impactful.

The itinerary was rich including in depth briefings, entertainment, tours, panel discussions on an array of topics, and more. One of the highlights was the tour of the Knesset and opportunity to meet with Knesset members representing different parties, some from the opposition and others part of the (presumptive) new government. These included Ohad Tal (Religious Zionist party), Sharren Haskel (New Hope), Tatiyana Mazarsky (Yesh Atid), and Itamar Ben-Gvir (Jewish Strength). While all spoke with passion and appreciation for the Christian journalists present, most anticipated was Ben-Gvir. The significance of his presence is that his was his first international media appearance since the November 1 election, and that he was also asked about past statements and actions where he defended people accused of burning a Galilee church, and participated in extremist protests at a Jerusalem church.

While this was a highlight of the Summit, from a political perspective, part of what was significant was who did not show up.

Presumptive Prime Minister Netanyahu was scheduled to speak on the opening night, but in the end he didn’t arrive. The announcement that he would not be able to participate was made at the end of the night, and that he would try to join the Summit at the Knesset a few days later. People understood that he was in the midst of last-minute negotiations and presenting legislation to form a new government, but were disappointed all the same. Among Israelis present, there was doubt that Netanyahu would show up from before the event began knowing that for him, details of forming a government would take priority. That there was no visible security upon entering the ballroom where the opening plenary was taking place was also a give-a-way to Israeli eyes and intuition.

It struck me as odd, even inappropriate, that while Netanyahu may be the incoming Prime Minister, and is well known and liked among Christians about whom he frequently says that Israel has no better friends, no current government members participate. While as the Summit was taking place, they may have been days away from being replaced as caretaker government to members of the opposition, as caretakers they should have cared.

Of course, the soon to be opposition was also busy exerting their parliamentary influence regarding laws that needed to be passed to be able to form a government. But they were not engaged in day to day and minute to minute negotiations with presumptive coalition partners. Presumably Prime Minster Lapid, Defense Minister Gantz, and other government ministers had a little more free time. They should have been present.

Thankfully, the GPO has been able to maintain course during the pandemic and Israel’s political instability. It’s an important investment. While the Jewish Media Summit follows the Christian Media Summit, and both are important, recognizing that Christian media is much bigger, connecting hundreds of millions in a way that’s much more pro-Israel than secular media, Israel needs to make this ongoing investment, help to connect Christians with Israel, and provide tools to do so. As much as I am proud and grateful for the GPO and its investment in Christian media, I am disappointed that the government leaders didn’t seem to care. Members of any Israeli government need to back up the GPO investment by being present and caring.

About the Author
Jonathan Feldstein made aliyah in 2004, married and raising six children in the Judean mountains. He is a long time Jewish non-profit professional. As president of the Genesis 123 Foundation he works closely with many Christians who support Israel, building bridges in ways that are new, unique and meaningful.
Related Topics
Related Posts
Jonathan Feldstein