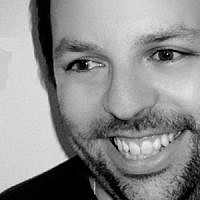 The Blogs
Adam Pearlman
Apply for a Blog
Advertisement
Please note that the posts on The Blogs are contributed by third parties. The opinions, facts and any media content in them are presented solely by the authors, and neither The Times of Israel nor its partners assume any responsibility for them. Please contact us in case of abuse. In case of abuse,
Report this post.

Since the summer of violence ended and the IDF pulled back from the incursion into Gaza, a tense quiet has dropped on Israel. Everyone has the feeling that it’s not ended and they would be right, tensions here are still high.  Around the world there is still a rise of Anti-Semitism and in Jerusalem there is violence on a more singular level than what happened in Gaza.

There have been 7 incidents here in Israel and people have died, including a baby, and 24 hours ago a hitchhiker thanked the generosity of the people who gave him a ride by throwing acid at children. To many it seems like nothing, most times you read in the paper in any country of random violence, people being stabbed or hit by cars.  Here it is different because of the way the rest of the world reacts to it; the lack of empathy for either side is disturbing.  Has the world become so desensitised to violence, so uncaring to others?  When are people going to wake up and see Israel doesn’t want war, doesn’t want to kill everyone in Gaza, they want peace and all they want is one statement from Hamas or any number of organisations or countries ‘We recognise Israel’s right to exist’.

Everyone wants peace, but reading peoples’ comments, both pro and anti Israel, it seems no-one does, the amount of hate directed to both sides is sad and worrying.  I’m not sure I understand it all myself, I just know I defend Israel as it’s my home and I have to believe that one day there will come a point where peace will finally be in our grasp.  The problem is will people recognise the opportunity for it and above all will the World wake up enough to set aside its hatred and help that goal come along.  Peace is out there, there has to be a solution.. it will just take a smarter person than you or I to say I have the solution, listen to me.

About the Author
I'm Adam from England. Been writing a blog about my experiences here in Israel since I made aliyah in October 2011 as a way for my friends in the UK to see what I'm getting up to.
Comments