Yesterday, a friend who lives in the Negev sent me a link to a Times of Israel article by Toni L. Kamins. In it, she broke the shocking news that Christians, for centuries, have celebrated January 1st — eight days after Christmas — as the Feast of the Circumcision of Jesus. 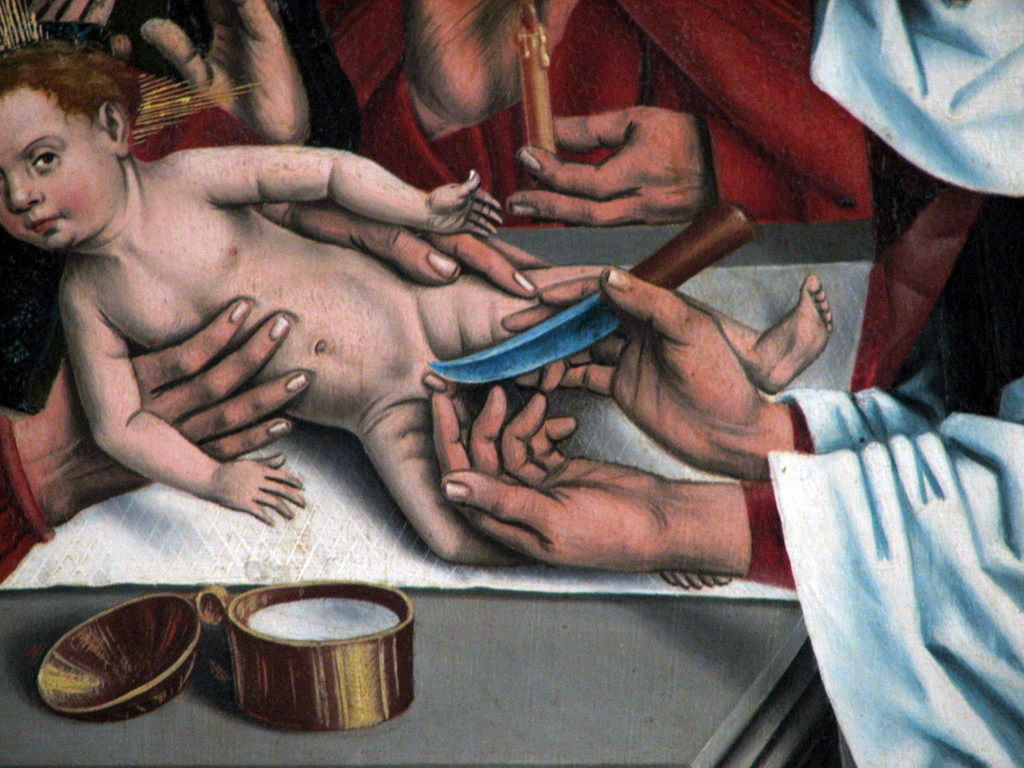 Excuse me for not being shocked.

Readers who wrote to protest that Jesus was probably not born on December 25th rather missed the point.

The beautiful thing, and the powerful thing, about churches marking an ancient brit is that we Christians are reminding ourselves – in a way so visceral it makes you want to cross your legs – that Jesus was Jewish.

More than that, we are facing up to the consequences of our claim that God became man.

Kamins sleuthed out David Farley’s book, An Irreverent Curiosity (2009), in which the author travels (fruitlessly) to Calcata, Italy to find the reliquary of the Holy Prepuce.

Was there ever such a reliquary? I say, of course there was – and probably still is, hidden in a cupboard by some embarrassed prelate. 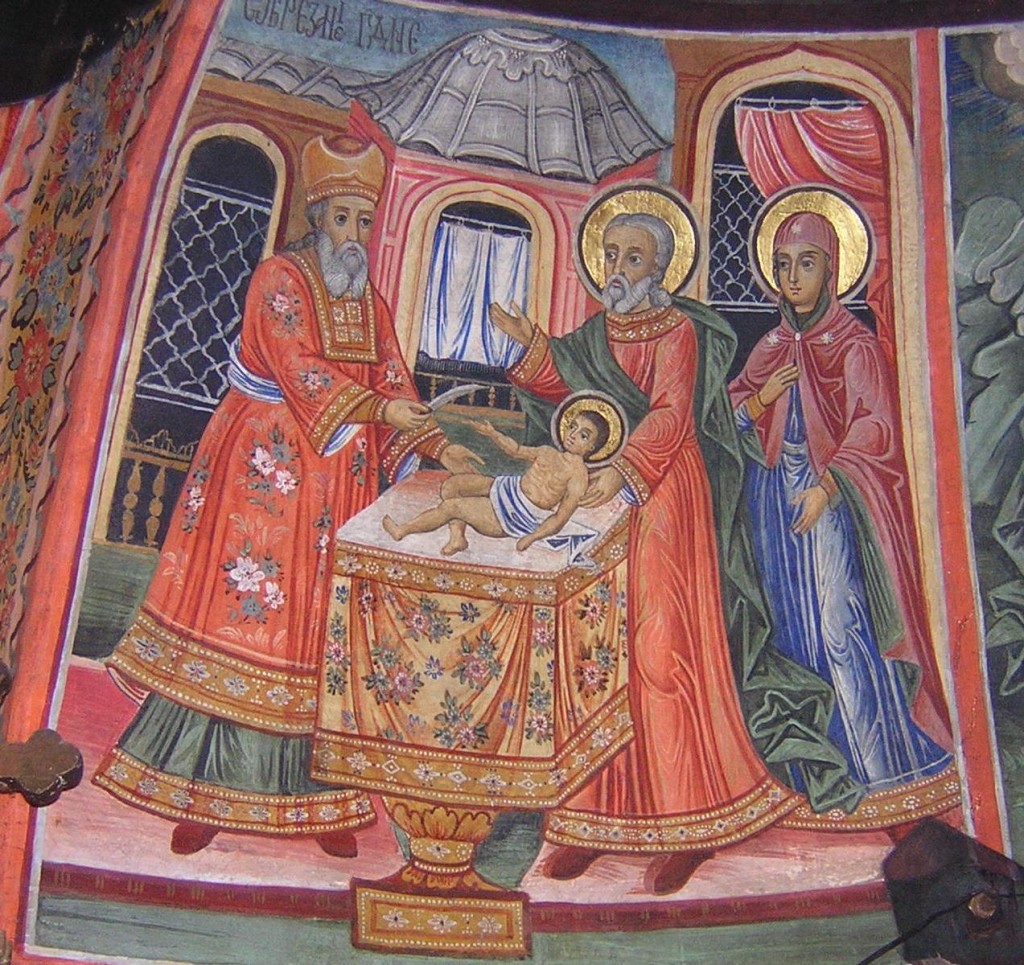 Circumcision of Christ, fresco from the Preobrazhenski Monastery, Bulgaria (Wikipedia)

This has a delicious logic: Christians believe Jesus ascended bodily into heaven forty days after he rose from the dead. The traditional site of his blast-off, by the way, is marked by the tallest steeple on the crest of Har HaZeitim.

That means there are no remains of Jesus here on earth for Christians to venerate (the tomb of Jesus in the Church of the Holy Sepulcher is just an empty hole. I checked).

But Christians — and Catholics especially — are lovers of the corporeal memorabilia called relics. For instance, the 800-year-old arm of Saint Hyacinth, the first Dominican in Poland, stands on a shelf in our Krakow monastery in an arm-shaped gold stand. The rest of him is somewhere else. 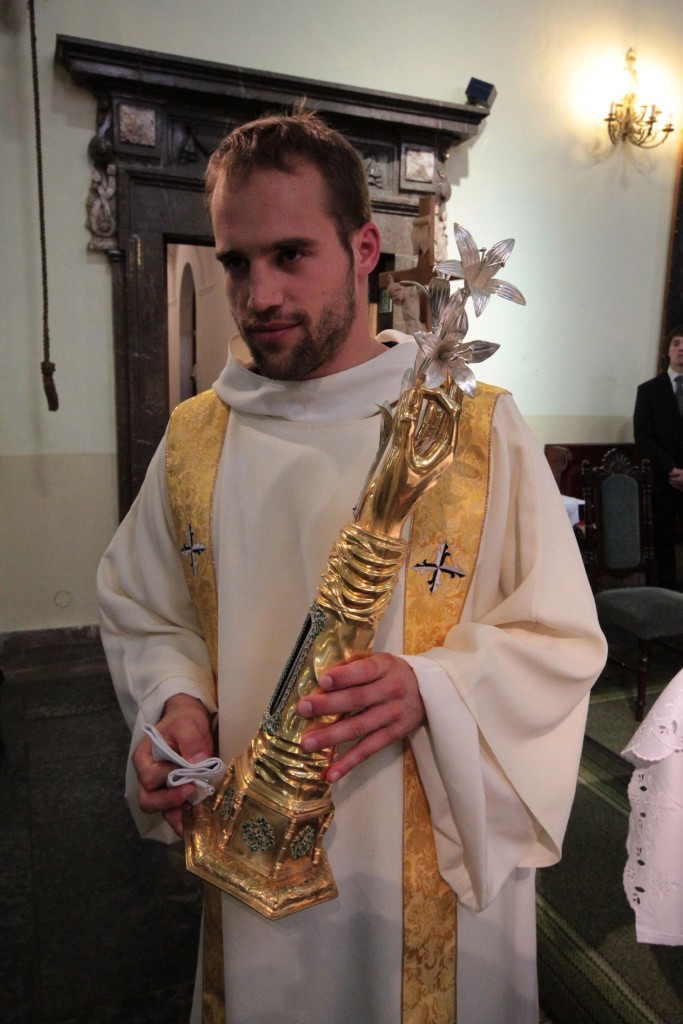 My fellow Dominican (and next-door neighbor) Brother Andrzej Drozd holding the reliquary of the arm of Saint Hyacinth (dominikanie.pl)

And of Jesus, what have we?

Why, the only part of his body left behind on earth. “The foreskin, certo!” said medieval Italians. One imagines it looks like a ring of calamari, another Italian specialty.

This word “ring“ is apt — we’re not finished yet:

In my Dominican Order (an order is like a club of monks and nuns), the most famous incident involving the Holy Prepuce is a fourteenth-century vision of the mystical author, nun and political activist Catherine of Siena. 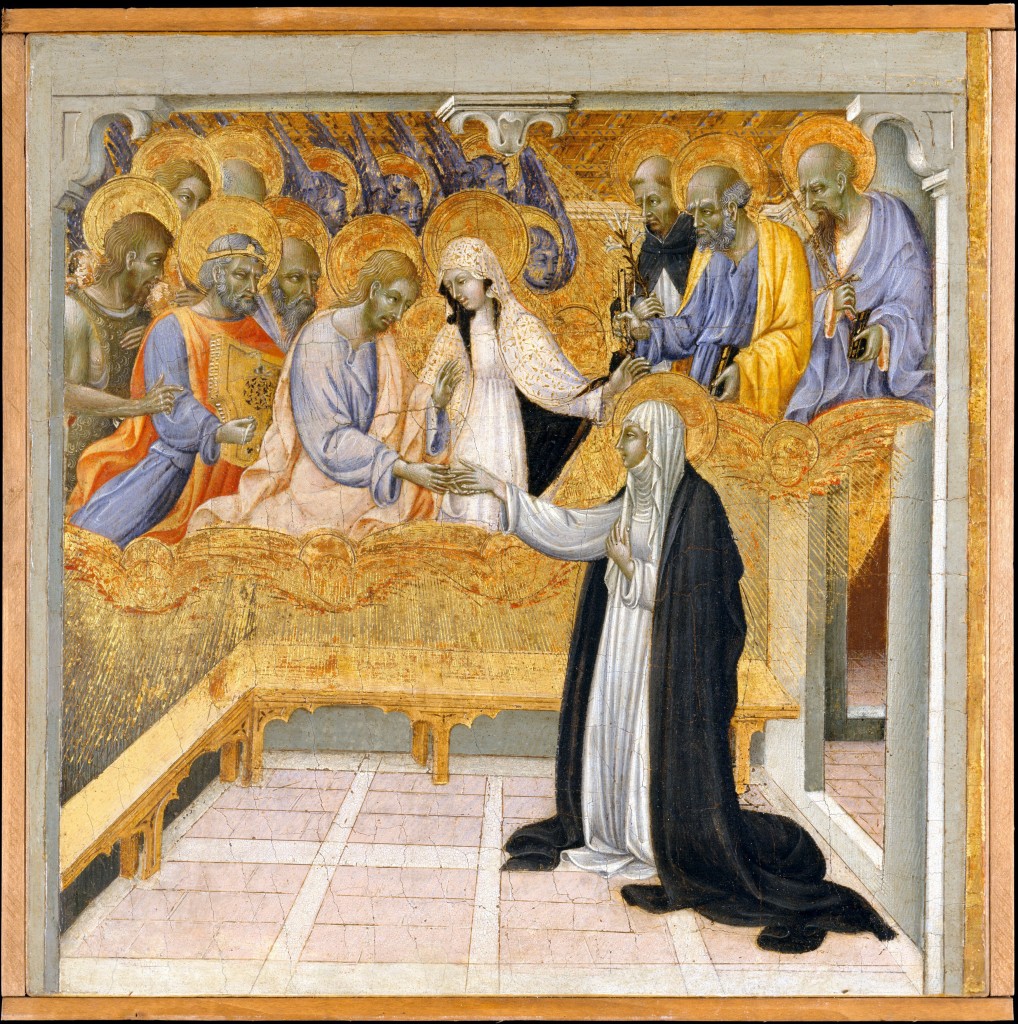 At age 21, Catherine claimed to experience a vision of a “mystical marriage” with Jesus. Christ appeared to her and slipped a ring on her finger — a visible sign of an intense spiritual bond.

But since Catherine, in one of her many letters, speaks of a “ring of flesh,” it did not take long for literal-minded commentators to suggest that the ring she received was in fact: Jesus’s foreskin.

That’s why I chose the verb slip. 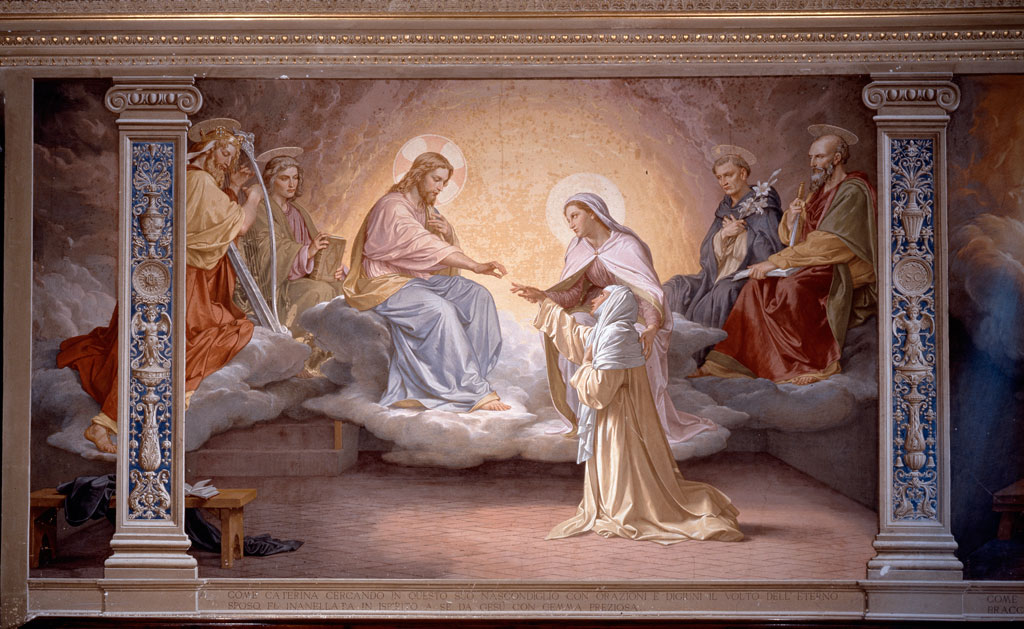 The Mystical Marriage of Saint Catherine of Siena, A. Franchi, 19th c.

In a letter to Sister Bartolomea della Seta of Pisa known to scholars as “letter 221” Catherine writes:

“Now let me tell you, dear daughter, what I want you to do. Be for me a mirror of virtue, following in the footsteps of Christ … You know that you are a bride, and that He has wedded you and every creature, not with a ring of silver, but with the ring of His Flesh.”

The ring of flesh. Did she mean a prepuce? 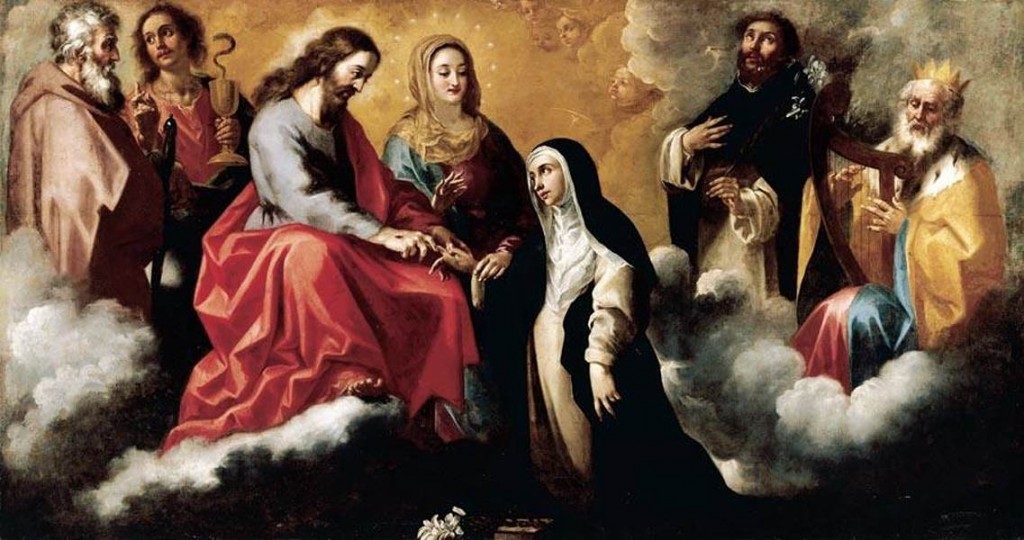 What is important here — and universal, I submit — is Catherine’s intuition that God loves each of us so deeply that he seeks to unite himself with us in the most immanent, intimate way.

He wants to share our experiences — including painful ones.

That, for Christians, is what the Incarnation we celebrate on Christmas means.

So, “The Mystical Marriage of Saint Catherine” has been celebrated in art for centuries, as the images here show. 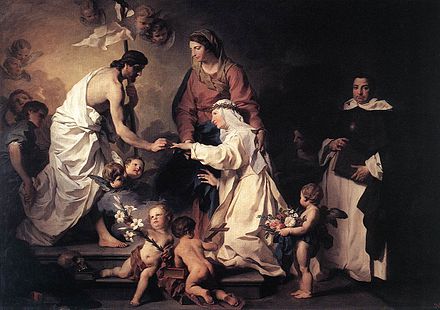 The paintings are lovely. But even I will admit that one experiences a certain frisson when one knows what that ring – always front and center — is supposed to be. 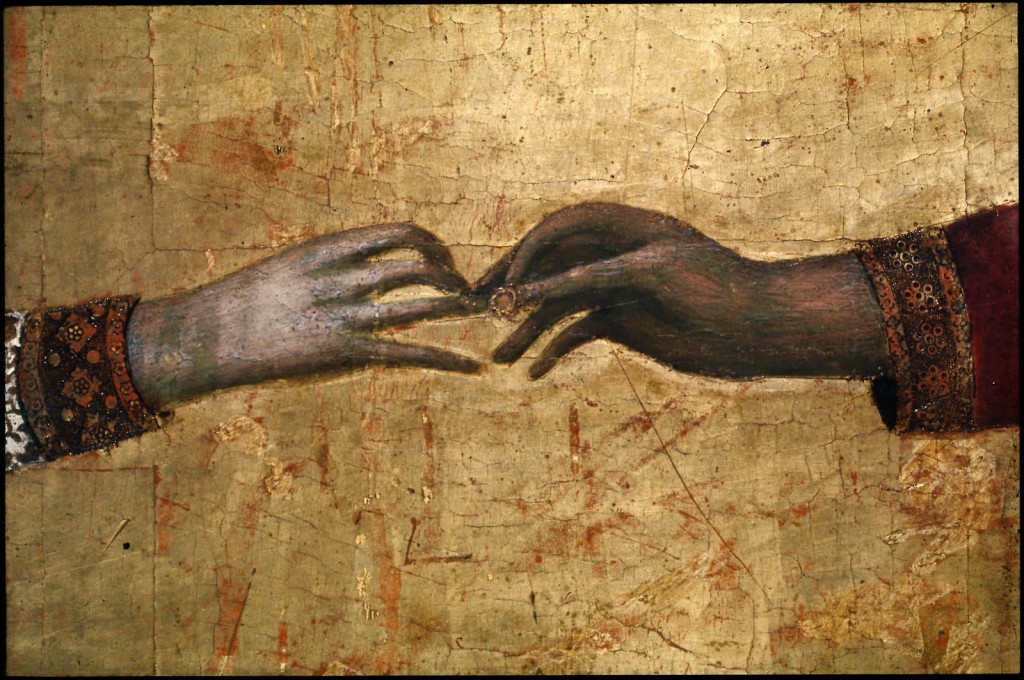 Detail of “The Marriage of Saint Catherine of Alexandria” – another Catherine – painted by Catherine of Siena’s neighbor Barna da Siena in the 14th c. (mfa.org)

Perhaps the tingle we feel should come not only at the schoolboy level  (“Blech!”).

To the knowing eye, these pictures mean more. They demonstrate a Church that means what it says about Jesus.

They show we take our scriptures seriously. There’s no getting out of it.

The Gospel says: “So Joseph also went up from the town of Nazareth in Galilee to Judea, to Bethlehem the town of David, because he belonged to the house and line of David. […] While they were there, the time came for the baby to be born, and Mary gave birth to her firstborn, a son.” (Gospel of Luke, chapter 2)

A Jewish family has a baby boy in Bethlehem in Judea.

Of course he was circumcised! 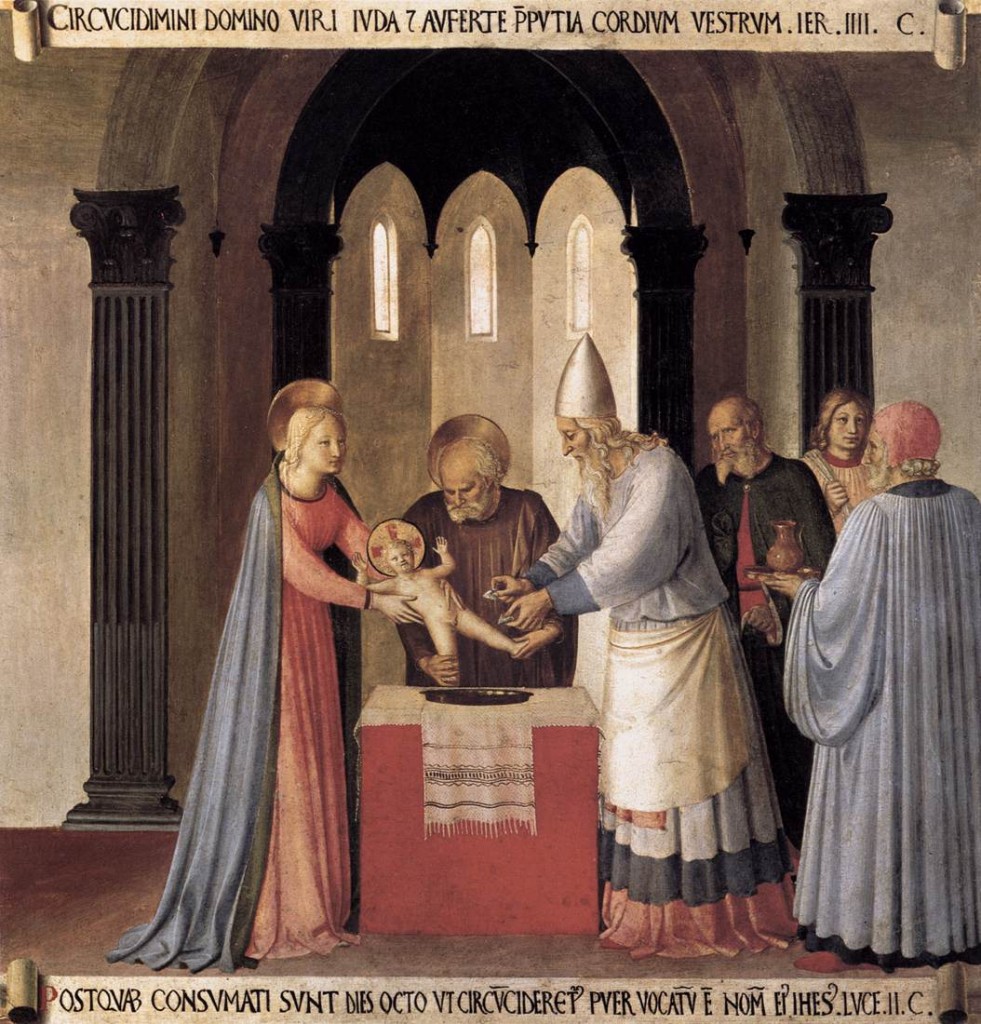 The Circumcision of Jesus by the Dominican master painter Fra Angelico, 15th c. The upper Latin inscription comes from Jeremiah, chapter 4, and reads: “Circuncidimini Domino viri Iuda et auferte preputia cordium vestrum” “Circumcise yourselves to the Lord, and take away the foreskins of your hearts, you men of Judah.” The lower Latin inscription reads: “Postquam consumati sunt dies octo, ut circumcideretur puer, vocatum est nomen ejus Jesus” “And when eight days were accomplished for the circumcising of the child, his name was called Jesus.” (Luke 2:21)
About the Author
Born in Wisconsin, Erik Ross is a priest of the Dominican Order who lives in Switzerland and comes often to Israel. For many years, he was stationed in Poland. He has long been active in Jewish-Christian conversations. He writes here with the permission of his major superior.
Comments