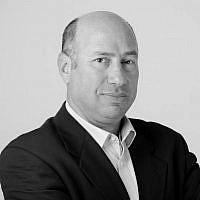 The Blogs
Josef Mandelbaum
Apply for a Blog
Advertisement
Please note that the posts on The Blogs are contributed by third parties. The opinions, facts and any media content in them are presented solely by the authors, and neither The Times of Israel nor its partners assume any responsibility for them. Please contact us in case of abuse. In case of abuse,
Report this post.

For many of us, there is perhaps no more basic comfort food than the sandwich. We take two pieces of bread, fill it, and have a self-sufficient meal. As kids, that was the meal that sustained us for years and is a staple of school lunchrooms all over the world.

The simplicity of the sandwich, celebrated this week on World Sandwich Day, is what attracted us to use it as an answer to a very complex problem – childhood hunger and juvenile delinquency across Israeli society.

Each day, in every corner of Israeli society, tens of thousands of children come to school hungry. While their classmates unpack lunch bags filled with snacks, fruit and containers filled with freshly prepared meals, they literally have nothing.

Perhaps this is a fact that seems beyond comprehension when thinking of an advanced nation like Israel. But the data shows that it is a very real, and growing, problem.

But hunger is only part of the challenge. Perhaps the bigger issue is that a hungry child is an irritable child, a jealous child and a child who has no desire to be in school and certainly no energy to try and excel in their studies. They act out, bully their classmates, disrupt and disrespect their teachers.

And as much as we might be led to believe that such school-based misbehavior is an unfortunate given and that “kids will be kids,” our research has shown that this is simply not the case. There is always a reason a kid acts out and more often than not it is because they are missing something. Perhaps it might be emotional or physical, but just as often it’s that they’re hungry.

That understanding brought us to the realization in 2006 to create NEVET, an organization that would provide as many hungry children as possible with a nutritious sandwich, discretely distributed in school. Our goal was to create a manageable logistical network, composed primarily of volunteers and partners within the school systems – many of them teachers or principals who have a personal stake in their students’ welfare- that could address the hunger and behavior challenges in a simple, cost-effective and trust building way.

Today, we take a great deal of pride in the success of this model, while fully cognizant of the fact that we have only scratched the surface.

We measure success not only in the number of sandwiches we distribute – 11,000 every day, with a projected 1.8 million in 2022- but in the impact reports we get from the schools in which we operate.

In a survey completed at the end of last school year among principals in schools who participate in the NEVET program, an overwhelming 96 percent reported significant academic and behavioral improvement since the sandwich program was implemented. Reduction in incidences of violence on school grounds, less smoking. Also 89 percent of the schools showed higher attendance rates, indicating that the children were dependent on the school to provide them with food for the day.

As of November 2022, we work with 250 Israeli schools and students of all backgrounds – Jew, Muslim, Druze, Bedouin, Arab, secular and religious. Hunger doesn’t discriminate and we know that it exists in every town and neighborhood, even those we traditionally associate as being upper-class and poverty-free. Nearly every day we get requests from schools to expand the program and about additional students who are in need of our support. That growing challenge presents many obstacles but reminds us of the value of the model we’ve introduced.

There are many worthy causes in the world, some higher profile and some working more quietly under the radar. It’s rare to find a cause that has such a meaningful and clear impact to a solvable problem, which is why I support Nevet and encourage you to as well. Because not every problem requires a complex solution. Sometimes it’s nothing more than the humble sandwich.

About the Author
Josef Mandelbaum is a Partner at SPC Global, an international Private Equity firm and Chairman of Nevet.
Related Topics
Related Posts