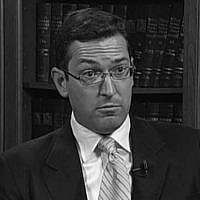 The Blogs
Benedict Rogers
Apply for a Blog
Please note that the posts on The Blogs are contributed by third parties. The opinions, facts and any media content in them are presented solely by the authors, and neither The Times of Israel nor its partners assume any responsibility for them. Please contact us in case of abuse. In case of abuse,
Report this post. 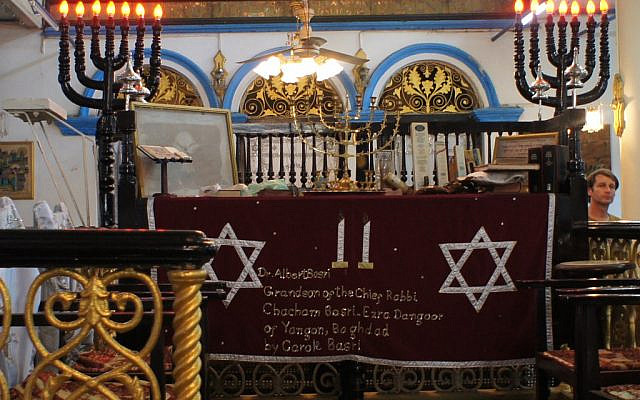 The altar of the Musmeah Yeshua synagogue in Rangoon/Yangon, Burma. (Wikipedia/Author - Esme Vos/ Attribution 2.0 Generic (CC BY 2.0)) Via Jewish News

An astonishing image from Myanmar (formerly Burma) captured hearts around the world last week: that of a Catholic nun, clad in her white habit, kneeling in front of Myanmar security forces, her arms outstretched, pleading with them not to shoot protesters. Even more astonishingly, two of the police officers knelt down too, their palms together in a gesture of peace and respect.

This was the second time in just a few days that Sister Ann Roza Nu Tawng intervened in this way. A few days previously, on 28 February, she stood between a line of police and protesters. She appealed to the security forces both times: “Just shoot me if you want to. Please kill me … instead of the children.”

Such heroism – especially from a woman from an ethnic and religious minority in a Buddhist-majority nation in which for decades the military has weaponized religion and conducted a brutal offensive against ethnic minorities – was truly remarkable. There have been other similar examples – a Buddhist monk sat in the road in between police and protesters in another city, and a Catholic priest tried to mediate in yet another location. If there is one silver lining in the horrific tragedy that has unfolded in Myanmar since the coup on 1 February, it is that people of different ethnicities and religions are united against the military’s illegal seizure of power and want real democracy.

Myanmar’s story until now is a four-part tragedy, a struggle between democracy and the military, with the rights of ethnic minorities trampled on throughout. Ever since independence in 1948 the country has endured over 70 years of civil war and repression. It has enjoyed some form of fragile democracy for just two ten-year periods – the first decade after independence and the past ten years until last month. In between it has been ruled by a succession of military regimes.

The only two election results which were honoured were in 2010, which the military heavily rigged, resulting in a government led by former Generals, and 2015, which Myanmar’s democracy leader Aung San Suu Kyi overwhelmingly won but whose power was restricted by the military-drafted constitution which gives the armed forces control of three key ministerial positions – home affairs, defence and border affairs – and a quarter of the seats in Parliament. So even in the country’s quasi-democracy the military still held real power – which makes the coup difficult to understand.

The only way to understand the coup is through the personal ambitions of its leader, the army chief General Min Aung Hlaing. Under the constitution he is expected to retire as commander-in-chief this year. He stands accused of genocide against the Rohingya, crimes against humanity and war crimes against other ethnic groups, and has extensive business interests to protect. Out of office, he would have felt more vulnerable. Moreover, he had his sights on the presidency. 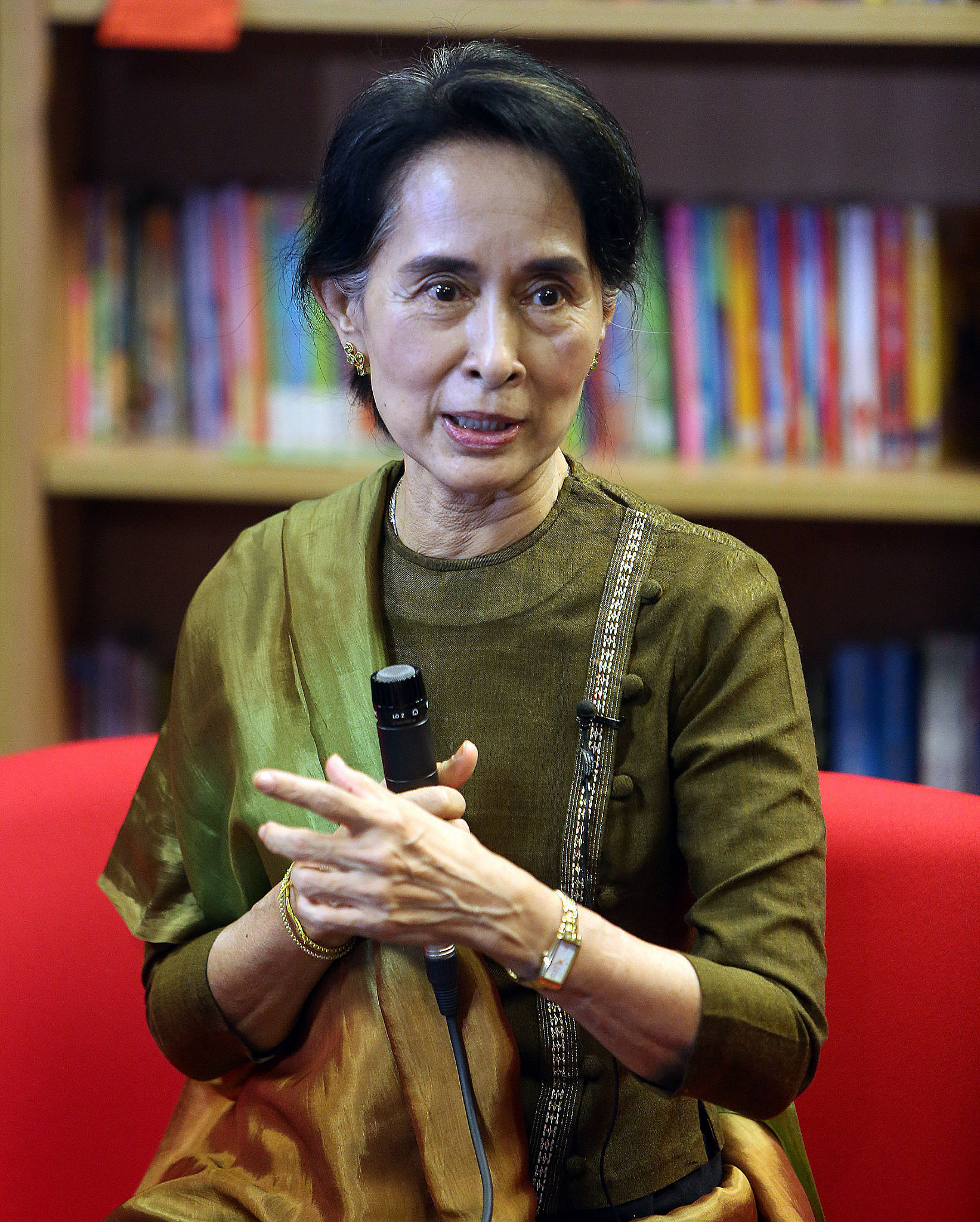 When the military-backed party, the Union Solidarity Development Party (USDP) fared far worse than he hoped in last November’s elections, he knew his chances of gaining high office through a ballot had evaporated, and so his only other option was to seize it with the bullet instead.

The coup sets Myanmar back more than a decade, undoing a period of reform which, though far from perfect and filled with storm clouds, nevertheless saw some space for civil society, an independent media and multi-party democracy. The crackdown on anti-coup demonstrations throughout the country has been horrifically brutal, with soldiers using live ammunition against protesters and firing into apartments as well. Over 2,100 people so far have been arrested, and over 80 people have been killed. The real death toll is likely to be much higher. Media outlets and civil society organisations have been raided, with journalists and activists arrested.

The plight of Myanmar’s ethnic and religious minorities is only going to worsen under military rule. Already in Karen State the army has broken a ceasefire and resumed attacks on civilians, resulting in over 7,000 displaced having fled their villages.

The military is motivated by an agenda of racial superiority which has frightening echoes of other genocidal regimes. Instead of celebrating Myanmar’s diversity, it envisions a Burman-dominated country driven by Buddhist nationalism, encapsulated in its slogan “One nation, one race, one religion”. Indeed in last November’s elections, Min Aung Hlaing urged his troops to vote for candidates who would “protect race and religion” – by which he meant Burman and Buddhist power.

Aung San Suu Kyi’s government failed to stem the rise of religious nationalism and identity politics, and allowed a genocide of the Rohingyas and a wider religious intolerance campaign to occur on its watch. Shockingly, some villages throughout the country declared themselves ‘Muslim-free zones’, with billboards stating that Muslims were forbidden, and Christians in some areas faced increasing hostility. Nevertheless there were some small symbolic steps to recognize ethnic minorities’ stake in the country’s future.

Her vice-president was a Christian from the ethnic Chin minority, the first time any minority was appointed to such a position. She was preparing to appoint another ethnic Chin Christian, Dr Sasa, to a senior ministerial position. Dr Sasa, who managed the flee the country after the coup, is now the international envoy for Myanmar’s elected Members of Parliament, who are all in hiding with warrants issued for their arrest.

An ethnic Karen, Mahn Win Khaing Than, leads the elected Parliamentarians’ body. Yesterday – from a hiding place – he described the current situation as “the darkest moment of the nation and the moment that the dawn is close”. He called for a united effort in “this revolution” to fight for “a federal democracy”.

You can be sure that Min Aung Hlaing’s regime won’t give ethnic minorities such a platform. Federalism is precisely what the military has fought against for over seventy years. And you can be confident that the man who orchestrated one genocide – of the Rohingyas – will inflict a similar nightmare on the entire population. The battalions that for decade have raped, tortured, burned, killed and enslaved Myanmar’s ethnic minorities is now rampaging through the cities unleashing a similar reign of terror.

At the heart of Myanmar’s former capital, Yangon, is a square which symbolises the country’s diversity. On one side sits the Immanuel Baptist Church, on the opposite side is a mosque, and in the centre is the Sule Pagoda. Around the corner is Myanmar’s only synagogue, Musmeah Yeshua Synagogue, led by Sammy Samuels, whose family has looked after it for four generations. Throughout the Samuels family’s time in Myanmar, the country has wrestled with different visions of its identity and future – one under racist, genocidal dictatorship or one in which ethnic and religious diversity is celebrated. In 2019 the human rights organisation CSW published a report that captures that struggle: Burma’s Identity Crisis: How ethno-religious nationalism has led to religious intolerance, crimes against humanity and genocide.

Yesterday was the Global Day of Prayer for Myanmar, and today CSW is hosting an online event addressed by Myanmar’s Cardinal Charles Bo, Dr Sasa, Lord Alton of Liverpool and Baroness Cox. In his message Cardinal Bo says: “We will pray and work for a new Myanmar to be born out of this current tragedy, a Myanmar where truly every human being has an equal stake in the country and equal rights to basic freedoms, a Myanmar where ethnic and religious diversity is celebrated and where we enjoy real peace, a Myanmar where the soldiers put down their guns, step back from power and do what an army is meant to do: defend rather than attack the people. … A Myanmar that rises again from the ashes.”

How do we get there? We need targeted sanctions – not against the country, but against the military and its enterprises. We need a global arms embargo. We need cross-border humanitarian aid because access to so many areas is blocked by the military inside the country. And we need the United Nations Secretary-General and Security Council to step up the diplomatic pressure against the regime. This dictatorship should not be recognized by any government – instead, those elected last November should be regarded as the legitimate representatives of the people.

The forthcoming genocide amendment to the Trade Bill – being debated yet again in the House of Commons later this month – is as relevant to Myanmar as it is to the Uyghurs in China, and so I hope Myanmar activist groups will support it. And I hope the Jewish community, which has so courageously led the way in calling out the Uyghur genocide and campaigning for the genocide amendment, might lend your voice and efforts also to the campaign for an end to the criminal dictatorship in Myanmar, one which pursues a racist, fascist and genocidal agenda with echoes of other tragic eras in history.