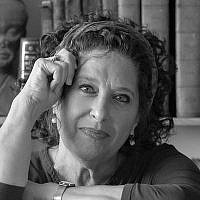 The Blogs
Andrea Simantov
Living Out Loud
Apply for a Blog
Advertisement
Please note that the posts on The Blogs are contributed by third parties. The opinions, facts and any media content in them are presented solely by the authors, and neither The Times of Israel nor its partners assume any responsibility for them. Please contact us in case of abuse. In case of abuse,
Report this post.

I awakened at 4:00 a.m. with a rare bout of anxiety. Unable to meditate myself back to sleep, I ultimately stood up, stretched and checked the freezer for anything that could be prepared for Shabbos without going to the market. If one is a fan of “stone-soup,” there was plenty to eat and my tension began to wane. By 5:15 a.m., it was late enough to take the dog out for the morning walk, say “Hello” to the regulars at the bus-stop and make the coffee. Hearing the familiar sound of the shower, I knew Ronney was awake.

The source of my unrest was not secret. A client had unexpectedly passed away. The ophthalmologist detected early cataracts. My annual mammogram is next week. A grandson with a chronic illness had his requisite soft-tissue MRI. Today is my shift to sit with a dying friend. My mother’s lucidity and health is diminishing and I am not there. I’m having a dispute with the federal tax bureau. There is an inflamed toe on my right foot.

While sitting in the waiting room of the MRI department, the creative cynic in me found herself stereotyping everyone who waited for either tests or verdicts: A tattooed Russian bar-bouncer; the Moroccan safta with orange hair who stuffs grape-leaves; a Hasidic scholar, pale from hours of yeshiva study. My daughter clandestinely took a photo of me reading to my grandson and I gasped in horror upon receipt. Is that how I appear to others? Soft and chunky, slightly wrinkled, kinky-haired, American, and haughty? Too old for jeans and hiking boots?

An electric door slid open and I witnessed a young man tying the shoes of his wife who had just emerged from an hour-long scan. Her hand was limp on his shoulder and the tenderness on his face as he knelt at her feet nearly broke my heart. I’d witnessed an intimate glimpse of the entire universe — not mine — upon which every tomorrow hinged. What was the inherent message waiting to be gleaned?

I want strangers to look at me and know that I’m important to someone, that I play a crucial role in the lives of those I love. But if this is what I want, shouldn’t the Moroccan safta be the most important person to those who are pushing her wheelchair and willing her tests to be “negative”? Do the wife and children of the yeshiva bochur fervently pray that he receives a clean slate, ensuring many years of mentoring and love? The Russian man is someone’s son, an adored uncle, someone’s beau; his Hebrew is heavily accented and better than mine. Who is he other than a Divinely created human who harbors dreams, expectations, fears and hope? He is the brother/son/friend I haven’t met yet. My inner-cynic grows quiet. There but for the grace of God goes every one of us. No exceptions.

The recently maligned Dr. Seuss is credited with saying, “To the world you may be one person; but to one person, you may be the world.” And despite the advances made in DNA testing, scientists have yet to identify and/or isolate a compassion-gene. Something to ponder as we enter a new Gregorian year, replete with the custom of making resolutions.

Happenstance happens. But when spiritual and physical underpinnings loosen, it might behoove us to remember that coffee, hot showers, taking out the garbage and an occasional load of laundry are reliable countermeasures for things that remain out of our control.

The above was originally published in the San Diego Jewish Journal, January 1, 2023.

About the Author
New York-born Andrea Simantov moved to Jerusalem in 1995. Writer, podcast host (israelnewstalkradio.com), life-coach and image consultant. She is spiritual, funny, cries easily (laughs harder), enjoys caravanning, celebrating her Jewishness and is always up for her next big adventure. With six children, 22 grandchildren and a mostly tolerant husband, life is busy, passionate and always evolving.
Related Topics
Related Posts
Andrea Simantov