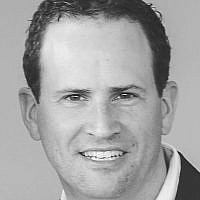 The Blogs
Tom Haastert
Apply for a Blog
Advertisement
Please note that the posts on The Blogs are contributed by third parties. The opinions, facts and any media content in them are presented solely by the authors, and neither The Times of Israel nor its partners assume any responsibility for them. Please contact us in case of abuse. In case of abuse,
Report this post.

My grandfather David Ben Mordechai (Z״L) and I would always end our phone calls with the sentence “אחרי החגים“ (after the holidays). This was our promise to each other that we would see each other latest after the next holiday. It always sounded so simple and probably would have been, but priorities have always been different and thus we could have seen each other more often. This understanding however comes in most cases too late.

As the new calendric year, 2021 is about to begin it is time to look back to the last 12 months. Also probably something that we should do more often in order to reflect but in most cases, it is a good idea that falls by the wayside. But the year 2020 has been no regular year, far from a „normal“ year where you rush from day to day, week to week or holiday to holiday. For me this year is very closely related to the Kabbalistic Concept of “אין סוף“ (Ein Sof) or infinity.

It all started with the infinite running practice in order to be prepared for the Jerusalem Marathon as a member of Team Shalva. I cannot recall how many kilometers I was running in order to be fit and ready for the run in front of the historical scenery of Jerusalem. But soon all this practice turned into an infinite waiting if this marathon would take place due to the continuing raising of numbers of the worldwide pandemic. At the end of the day, it was the only logical consequence that an event of this kind could not take place. What a disappointment for everybody, but, to give up was not an option as this running was for a greater cause – for the kids and their families of Shalva. Thus, I decided to run the half-marathon as intended but not in Jerusalem but in Berlin. It seemed to be an infinite race, even though it still remained to be 21km.

The year continued with the next loop of infinity, or better known as uncertainty. We stumbled from lockdown to lockdown hoping that the good weather in the summer would bring us the highly needed break into the new situation. And yes, the summer month seemed to be close to normal as most of our lives continued as if the virus didn’t exist. Traveling, visiting of family and friends even the schooling celebration for our second daughter was possible. The normal life as we knew it seemed to be back, but it would be a new kind of normal. Soon, the infinite reminders and warnings about the upcoming second wave would take over most of the daily small talk among families and friends. Everybody tried to do the best out of it – some being more cautious than others.

The beginning of the holiday season for the new Jewish year 5781 was also different than in the years before. The hopes to be together with the family soon ended up in the situation that we either had to sign up to participate at services and if we would get hold of a limited seat the most loyal companion was your face mask. Thus, it all started with another infinite round of being separated from most of the ones we love and need. Don’t want to imagine what this meant to the kids of Shalva, who needed their daily support at the Shalva National Center in Jerusalem.

Nonetheless, there was also light at the end of the tunnel – a vaccine. Of course, it was also somehow an infinite story about development, testing, regulation as vaccine development is a long, complex process. Now, we all look forward to that little injection. Last but not least, my year doesn’t end with infinite running but rather with a multiple of the number eight (infinity). By the end of the year 2020 my legs, shoes and gear will have carried me over 800km – a hundred times infinity.

As Team Shalva will also not participate at the Jerusalem Marathon in 2021 (despite if it takes place at all) I might have to reassign my donation goal and hope to collect with your help a multiple of the number eight (שמונה) per kilometer I run. Maybe a suitable goal would be $6.400 as I was running 800km in 2020 ;-). Anything you can give would help me reach my goal, and together we’ll be supporting this truly special place in Jerusalem. Thank you in advance for your help and generosity.

By the way, my grandfather would have turned 100 years this year.

About the Author
Tom, originally from Cologne (Germany), grew up in a German-Israeli family. Currently he lives in Berlin with his wife and two girls. He is working as a Digital Transformation Manager for the German car industry.
Related Topics
Related Posts
Comments