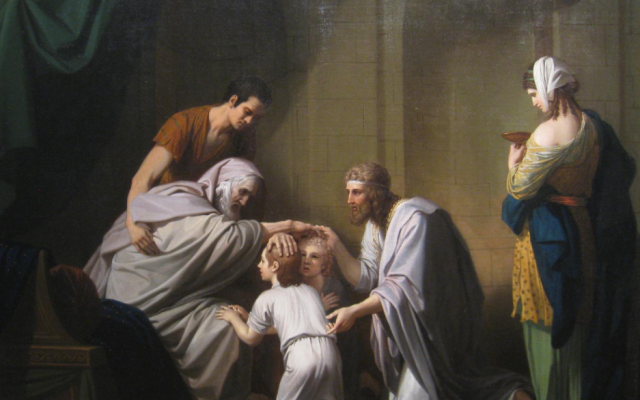 Why does the Torah inform us of Yaacov’s blindness? And why does Yosef refer to Yaacov switching his hands as “evil in his eyes”?

The closing stories of Breishit provide us with a rectification to the generations of discord. The brother against brother violence and manipulation, the father and child distrust and resentment. All revolving around the rights of the firstborn and the inheritance of Avraham. Finally Yosef has a chance to improve the status quo. His children, Ephraim and Menashe were raised outside the influence of that world and are seemingly content. The text provides no hint of brother vying against brother. Even more impressively, it seems that Yosef managed not to project his familial trauma onto his children as evidenced from his choice of names for his children (Breishit 41:51-52).  However, in the final moments of Yaacov’s life we find a momentary rekindling of dysfunction.

Yosef brings his sons to be blessed by Yaacov before he dies. Despite Yosef’s best efforts (48:13), Yaacov crosses his hands so as to place his right hand upon the younger brother (48:14). Yosef pauses for a moment, seemingly observing the situation before reacting. Following Yaacov’s initial blessing of his children, Yosef is upset and physically tries to remove his father’s incorrect hand placement (48:15-17). It appears that Yosef saw this act of misappropriating the right hand as threatening to rekindle the animosity of the older brother against the younger that he had struggled so hard to rectify. However, Yaacov then clarifies his intentions. His hands were switched only to demarcate the future multiplicity of the youngest son and the order of their names when given as blessings in the future (48:19-20). However, unlike the prior generations of discord between brothers, which was caused by a combination of inheritance rights or parental favoritism, Ephraim and Menashe would be treated as equals. Each received an equal portion (48:5) and each would be the namesake for Israel’s future blessings (48:20), with distinction given only to the objective reality of the larger tribe.

Despite the succinctness of the story, there remains an important nuance that introduces significantly greater complexity. As described above, the text required no additional information for the reader to comprehend the interpersonal dynamics and motivation. Yet, the text provides the reader with the conspicuously extraneous fact of Yaacov’s blindness (48:10). This caveat does not provide an essential component to enlighten the events, yet its role seems imperative. For example, if one were to remove Yitzchak’s blindness from the story of Esav and Yaacov, then the entire story loses its cohesiveness. The blessing of Ephraim and Menashe holds no such necessity to blindness. Not only is Yaacov’s blindness superfluous to the story, it is seemingly contradicted as vision is repeated multiple times in this section (48:8,11), beginning with Yaacov’s sight of his grandchildren. The text even poetically contradicts itself when Yaacov expresses his joy for having survived long enough to ‘see’ Yosef again, as well as the privilege to have ‘seen’ his grandchildren as well immediately after informing the reader that he was blind (48:11). The conspicuous use of vision conjures for the reader the literal meaning of ocular perception as well as the figurative meaning of conscious perception; hinting that things are not always as they appear.

The simplest reading of the text suggests that this narrative inclusion was necessary as it provides Yosef with an excuse to intercede with his father’s hand placement, justifying his interjection on the notion that his father’s blindness led to his incorrect hand placement. If he was not blind then his actions could not be questioned. This detail allows the reader to appreciate the subliminal dialogue between Yosef and Yaacov. Yosef is cautious to shield his children from the mistakes of his family, while Yaacov demonstrates that he likewise did not intend to recapitulate past mistakes.

However, the text complicates this understanding in a peculiar and unsettling way.  Multiple details are insinuated into the text to remind the reader of the precipitating events to the discord between Esav and Yaacov.  Yaacov capitalized on his father’s blindness to deceive him to steal the birthright from his older brother Esav at the behest of his mother. This misdeed directly and indirectly resulted in all of Yaacov’s subsequent tribulations that plagued his long and difficult life. Deception followed Yaacov at every turn and with every relationship for the remainder of his life. Deceived by Lavan about his wife and earnings. Deceived by his own children with the sale of Yosef. Yaacov had grown accustomed to the role deception played in his life, especially from those closest to him and at times of greatest circumstantial irony. It would be reasonable for him to have assumed in his final days, when he was most vulnerable, that the son who potentially held the greatest contempt for him would seize this opportunity to force the birthright onto the child of his own choosing. Likewise, knowing his father’s tortured past, it is reasonable that Yosef would think his father would assume such ill intentions from him.

Yosef now witnesses his vulnerable father switching his hands. While certainly reasonably explained by the prior explanation, it is possible that Yosef was also upset because it implied his father did not trust him (48:17). It takes Yosef a moment, but Yosef reviews the preceding events and may have concluded that his father assumed Yosef was attempting to deceive him, just as he had of his own father. This explains the seemingly superfluous confirmatory efforts Yaacov employs to determine the heritage of the children present (48:8-9) and then hugged and kissed them (48:10), precisely recapitulating his own father’s efforts (27:18,21,26).

Not only does Yaacov demonstrate signs of distrust in Yosef, he also appears to appease Yosef’s grievances against him. This explains the extraneous inclusion of Yaacov’s rationalization for why he abandoned Rachel along the road. Something that Yaacov was likely concerned still irked Yosef about the treatment of his mother (48:7); providing Yosef an explanation for the logistical reasoning behind that decision which occurred when Yosef was very young. A time when he may not have possessed the sophistication to understand why his mother was not treated as a beloved wife should normally be treated.

What remains is the ambiguity of Yaacov’s reason for switching his hands. If Yaacov had doubted Yosef, then his response is dishonest (48:19). If he did not doubt him then what is the purpose of the textual intercalation of the original story of deception as detailed above? Are these conflicting details intended to be unsatisfactory, to demonstrate that despite the reunification of the family there remained distrust and discord? This might explain the disturbing final scenes of the family filled with deception, distrust and resentment (50:15-20).  Following the death of Yaacov the brothers assume Yosef will now seek revenge, just as Esav had intended against Yaacov (27:41). They attempt to deceive him by enlightening him that their father had instructed him to have mercy on them. Yosef cries, as though hurt again by his family’s lack of faith in him. Yosef reiterates to them that he will do well by them, however reveals his cognizance of their intention of evil upon him.

Yaacov’s blindness ironically reveals what is unseen. It reveals to the reader the subtext of distrust that remained in the family. It metaphorically demonstrates that Yaacov, even to the very end, did not truly see his son for who he was, only his own personal lack of trust in even those closest to him.