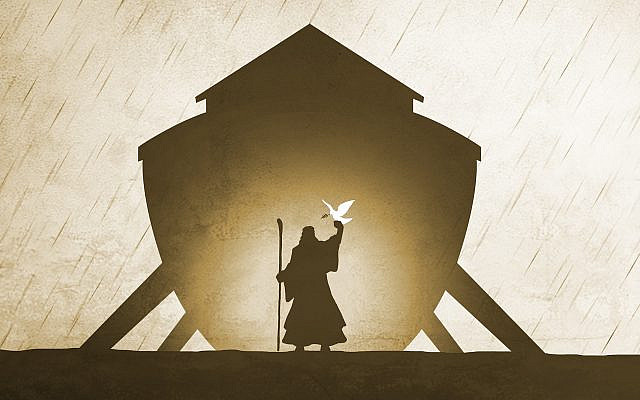 "when it comes to rebuilding a shattered world or a broken dream, you don’t wait for permission from Heaven. Heaven is telling you to go ahead." Image by Jeff Jacobs from Pixabay.

For each of us there are milestones on our spiritual journey that change the direction of our life and set us on a new path. For me one such moment came when I was a rabbinical student at Jews’ College and thus had the privilege of studying with one of the great rabbinic scholars of our time, Rabbi Dr. Nachum Rabinovitch, zt”l.

He was a giant: one the most profound Maimonidean scholars of the modern age, equally at home with virtually every secular discipline as with the entire rabbinic literature, and one of the boldest and most independent of poskim, as his several published volumes of Responsa show. He also showed what it was to have spiritual and intellectual courage, and that in our time has proved, sadly, all too rare.

The occasion was not special. He was merely giving us one of his regular divrei Torah. The week was parshat Noach. But the Midrash he quoted to us was extraordinary. In fact, it is quite hard to find. It appears in the book known as Buber’s Tanchuma, published in 1885 by Martin Buber’s grandfather Shlomo from ancient manuscripts. It is a very early text – some say as early as the fifth century – and it has some overlap with an ancient Midrash of which we no longer have the full text known as Midrash Yelamdenu.

Noah said to himself, ‘Since I only entered the Ark with permission (from God), shall I leave without permission?’ The Holy One blessed be He said, to him: ‘Are you looking for permission? In that case I give you permission.’ Then God said to Noah, ‘Come out of the Ark.’

The Midrash then adds:

Said Rabbi Judah bar Ilai, ‘If I had been there, I would have smashed down [the doors of] the Ark and taken myself out of it.’[1]

The moral Rabbi Rabinovitch drew – indeed the only one possible – was that when it comes to rebuilding a shattered world, you do not wait for permission. God gives us permission. He expects us to go on ahead.

This was, of course, part of an ancient tradition, mentioned by Rashi in his commentary (to Gen. 6:9), and central to the Sages’ understanding of why God began the Jewish people not with Noah but with Abraham. Noah, says the Torah, “walked with God” (6:9). But God said to Abraham, “Walk on ahead of Me” (Gen. 17:1). So the point was not new, but the drama and power of the Midrash were stunning.

Suddenly I understood that this is a significant part of what faith is in Judaism: to have the courage to pioneer, to do something new, to take the road less travelled, to venture out into the unknown. That is what Abraham and Sarah had done when they left their land, their home and their father’s house. It is what the Israelites did in the days of Moses when they journeyed forth into the wilderness, guided only by a pillar of cloud by day and fire by night.

Faith is precisely the courage to take a risk, knowing that “Though I walk through the valley of the shadow of death, I will fear no evil, for You are with me” (Ps. 23:4). It took faith to challenge the religions of the ancient world, especially when they were embodied in the greatest empires of their time. It took faith to stay Jewish in the Hellenistic age, when Jews and Judaism must have seemed small and parochial when set against the cosmopolitan culture of Ancient Greece and the Alexandrian Empire.

It took the faith of Rabbi Yehoshua ben Gamla to build, as early as the first century, the world’s first ever system of universal, compulsory education (Baba Batra 21a), and the faith of Rabban Yohanan ben Zakkai to realise that Judaism could survive the loss of independence, land and Temple, on the basis of an academy of scholars and a culture of scholarship.

In the modern age, even though many of Jewry’s most distinguished minds either lost or abandoned their faith, nonetheless that ancient reflex survived. How else are we to understand the phenomenon that a tiny minority in Europe and the United States was able to produce so many shapers of the modern mind, each of them a pioneer in his or her own way: Einstein in physics, Durkheim in sociology, Levi-Strauss in anthropology, Mahler and Schoenberg in music, and a whole string of innovative economists from David Ricardo (the law of comparative advantage) to John von Neumann (Game Theory) to Milton Friedman (monetary theory), to Daniel Kahneman and Amos Tversky (behavioural economics).

They dominated the fields of psychiatry, psychotherapy, and psychoanalysis, from Freud and his circle to Viktor Frankl (Logotherapy), Aaron T. Beck (Cognitive Behavioural Therapy) and Martin Seligman (Positive Psychology). The pioneers of Hollywood and film were almost all Jewish. Even in popular music the achievement is stunning, from Irving Berlin and George Gershwin, masters of the American musical, to Bob Dylan and Leonard Cohen, the two supreme poets of popular music in the twentieth century.

In many cases – such is the fate of innovators – the people concerned had to face a barrage of criticism, disdain, opposition, or disregard. You have to be prepared to be lonely, at best misunderstood, at worst vilified and defamed. As Einstein said, “If my theory of relativity is proven successful, Germany will claim me as a German and France will declare me a citizen of the world. Should my theory prove untrue, France will say that I am a German, and Germany will declare that I am a Jew.” To be a pioneer – as Jews know from our history – you have to be prepared to spend a long time in the wilderness.

That was the faith of the early Zionists. They knew early on, some from the 1860s, others after the pogroms of the 1880s, Herzl after the Dreyfus trial, that European Enlightenment and Emancipation had failed, that despite its immense scientific and political achievements, mainland Europe still had no place for the Jews. Some Zionists were religious, others were secular, but most importantly they all knew what the Midrash Tanchuma made so clear: when it comes to rebuilding a shattered world or a broken dream, you don’t wait for permission from Heaven. Heaven is telling you to go ahead.

That is not carte blanche to do whatever we like. Not all innovation is constructive. Some can be very destructive indeed. But this principle of “Walk on ahead”, the idea that the Creator wants us, His greatest creation, to be creative, is what makes Judaism unique in the high value it places on the human person and the human condition.

Faith is the courage to take a risk for the sake of God or the Jewish people; to begin a journey to a distant destination knowing that there will be hazards along the way, but knowing also that God is with us, giving us strength if we align our will with His. Faith is not certainty, but the courage to live with uncertainty.

[1] The Midrash seems to be based on the fact that this is the first verse in the Torah where the verb d-b-r (to speak) is used. The root a-m-r (to say) has a similar meaning but there is a slight difference between them. D-b-r usually implies speaking harshly, judgmentally. See also Ibn Ezra ad loc., who senses from the text that Noah was reluctant to leave the Ark.

These questions come from this week’s new Family Edition to Rabbi Sacks’ Covenant & Conversation. For additional interactive, multi-generational study, check out the full edition at www.rabbisacks.org/covenant-conversation-family-edition/