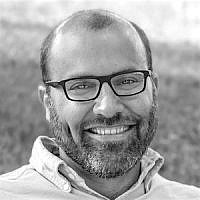 The Blogs
Adam Barbanel-Fried
Apply for a Blog
Advertisement
Please note that the posts on The Blogs are contributed by third parties. The opinions, facts and any media content in them are presented solely by the authors, and neither The Times of Israel nor its partners assume any responsibility for them. Please contact us in case of abuse. In case of abuse,
Report this post.

Recently, I was surprised to find myself moved by an event I participated in calling for more support for pluralistic visions of Judaism. It was my last night of the third (non-consecutive) year of my life in Israel and we were protesting outside the Prime Minister’s Residence for, among other things, a space for egalitarian prayer at the Western Wall (or Kotel).

For most of my years in and out of Israel, I didn’t take the movement for egalitarian prayer at the Kotel very seriously. At a certain level, who cares about a wall? Didn’t Abraham walk away from idol worship? I don’t believe in worshiping rocks, or caves. The Judaism that speaks to most of us is in community. And yet, I can’t entirely dismiss the Kotel either. I don’t value the Kotel as the symbol of Judaism, but I do value it as an artifact and memorial to our religious history. And while at first I was, at best, uninterested in the Kotel protests, I am now coming to appreciate how far they’ve gotten from a personal and political perspective.

On a personal level, when I visited as a 16 year old, I had trouble relating with the orthodox men who were sobbing at the wall on Tisha B’av. Yet, reading Jeremiah’s lamentations of the Temple’s destruction in the Kotel courtyard was a memorable experience. When I was 18, they didn’t convince me to become orthodox as part of the Friday night home hospitality organized there, yet it did play a role in inspiring me to make Shabbat central to my life.

On a political level, watching this fight emerge has been fascinating. As a community organizer working for years in the Alinksy tradition I learned that when people want to win on an issue, we don’t organize conferences talking about societal problems, we don’t issue policy papers or blue ribbon panels. Citizens are most effective when focusing on specific things that are easy to understand, something we can point to and that we can organize a group around. The earliest American labor union contracts, for example, were written on one page. That way every member of the union could understand, fight for and defend it. Now, because of the thousands of lawyers involved in the overly litigious American society, much of the unionized workforce doesn’t truly understand the contracts they are fighting for. And that is a problem.

This past month or so demonstrated what an effective issue campaign can create. The Israeli Prime Minister made a deal with the Jewish world, back tracked on the deal, tried to come up with a compromise, and major denominations and leaders of the Jewish the world stood up and walked out. Suddenly, the whole Jewish world was noticing.

By now many have weighed in. Natan Shiransky, now heading the Jewish Agency, Yair Lapid, leader of the centrist Yesh Atid Party and political threat to the Prime Minister, and even AIPAC came in to meet with the PM over what was called the Kotel Crisis. Before long, a 6 month postponement of the deal and the conversion bill had been enacted and we will see what happens next.

Incidentally, who controls which conversions are recognized in the state of Israel is of importance to the entire Jewish world. If half of world Jewry doesn’t recognize the thousands of Jews living normal Jewish lives in the rest of the world, this will draw wide an already growing schism. It’s either an act of genius or luck that the two issues were linked.

Ultimately, to this organizer, this fight has the classic examples of how to fight an issue based campaign. When the Alabama Police Commissioner Bull Conner set the bull dogs on peaceful civil rights demonstrators in the 1960s, for example, it was a vicious act. It was also one of the most helpful things that happened for the Civil Rights Movement, because the photos of police dogs tearing at the clothes of peaceful protesters suddenly appeared in papers the world over and arguably told the story of brutal US racist oppression better than most protesters could. While a very different story, the photos of men and women carrying Torah scrolls together being jeered at and threatened were appalling. The media imagery is strong and the message is clear. The Kotel is presented as Judaism’s “most holy site,” and is an icon with political importance. Perhaps that is why this fight took off, and the protestors won a reprieve.

And then the spin came. I was not surprised to see some reactions from some corners of the ultra orthodox community, or that some on the right attacked this as a concern for ill-informed North American Jews. Nor, given Israeli life, and Netanyahu’s tendencies, that a deal that we thought was negotiated was undone and then tabled. I was disappointed, however, how many on the left criticized it. “American Jews are selfish,” one said, “you should be talking about the occupation, or other matters of religious pluralism or democracy,” others said. Someone even criticized American Jewish leaders for talking about this instead of fighting for other American matters, including health care in the US, despite the fact that a growing number of Reform, and other, congregations have played key roles in coalitions that successfully pushed for major health care expansion and other matters in North America.

Of course, the daily struggles of Palestinians matter. The control the Israeli Rabbinate exercises over Israeli society, also matters. But I don’t see what one has to do with the other. There is more to public life than political check lists. Political action requires us to choose our battles and focus on specific issues people can understand. Effective public action requires a broader understanding of politics that is not defined by the fundamentalist dialogues among us.

So there I was with several thousand Israelis. Protesting outside the Prime Minister’s residence. Singing, dancing, appreciating where we were, and challenging the state of Israel to live up to its own ideals. We didn’t need the whole kitchen sink. We wanted a win. Let’s hope we keep it.