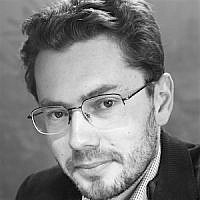 The Blogs
Jan Fingerland
Apply for a Blog
Please note that the posts on The Blogs are contributed by third parties. The opinions, facts and any media content in them are presented solely by the authors, and neither The Times of Israel nor its partners assume any responsibility for them. Please contact us in case of abuse. In case of abuse,
Report this post.

For a Czech interested in Middle East affairs, it became a bit uncomfortable to read Israeli newspapers last week. After 27 years of Czech pro-Israeli stances, Prague suddenly became an object of disfavor, if not disgust. According to some readers, Czechs are “pathetic,” their country should be “given to the Soviets” or “Austria” because they “went the way of the other European anti-Semites.” Last but not least, stupid citizens of “Czechoslovakia” should “learn some geography.”

The cause of this fall from grace is a recent controversial decision by the Czech Ministry of Education. After complaints by several local Palestinians (and a Palestinian diplomat), the ministry asked a school textbook publisher to list Tel Aviv, not Jerusalem, as capital of Israel in the next edition of its atlas. Virtually all of the Israeli news sites I know of published articles about this colossal Israeli diplomatic disaster. Even the publisher, who originally stated Jerusalem as the capital of Israel, is reportedly receiving angry emails from Israel and America accusing it of anti-Semitism.

Gone, it seems, are the days when Israelis praised Czech prime ministers for equating Arafat with Hitler and defending Israel’s right to respond as needed to terrorism. Forgotten are all the maneuvering Czechs (and some other post-Communist countries) did to balance EU positions regarding the Israeli-Arab conflict. Who cares that the Czech nation remains one of the friendliest to Jews on the Continent. It is Prague, not Tehran, that is now the object of unbridled hostility.

I am neither surprised nor insulted. As journalist, I have my own experience with certain kinds of readers, and know a bit about the strange world of the Internet discussions. What does worry me is to hear that this absurd atlas issue is being seriously dealt with by the highest political circles in Jerusalem (capital or not)! Does the Israeli government have no higher priorities these days? Is it not busy dealing with Iran, ISIS, Hezbollah, Hamas, or even recent American protests against new settlements?

In fact, the whole thing is a storm in a teacup, or, in this case, a beer stein. Virtually no Czech parent takes an interest in the question of Jerusalem vs Tel Aviv. (The decision of the Czech ministry is provisional anyway). Furthermore, Tel Aviv has already been stated as the Israeli capital in other Czech school atlases printed by another company.

More than anything, the whole thing is a non-issue. It does not signal any major policy change, as one might infer from the angry Israeli response. Czech Republic is a country that has been trying to defend the Israeli point of view within the EU and UN for more than 25 years and continues to do so. Still, it has always insisted that the solution lies in the creation of two states and has always called for bilateral Israeli-Palestinian agreement on questions such as Jerusalem. After all, Czechs never moved their embassy from Tel Aviv to Jerusalem.

Yes, the whole thing is pathetic. It is not so much about current Czech diplomacy as about contemporary Israel and (at least some) pro-Israel circles in English speaking countries. When viewed from Prague, the whole micro-affair has been blown out proportion, creating an hysterical, unproductive and unhealthy atmosphere. True, the matter of Jerusalem is very serious and Palestinians are becoming very effective in promoting their view. At the same time, one should be aware that the future of Jerusalem will not be decided on the pages of school atlases, and certainly not Czech school atlases.”

Jan Fingerland is a Czech journalist who specializes in Mideast affairs and serves as a foreign affairs commentator for Czech Radio in Prague. He conducted his post-doc research in 2007-8, at the Shalem Center in Jerusalem, where he wrote a paper on the attitudes post-Communist countries toward Israel.

About the Author
Jan Fingerland is a Czech journalist who specializes in Mideast affairs and serves as a foreign affairs commentator for Czech Radio in Prague. He conducted his post-doc research in 2007-8, at the Shalem Center in Jerusalem, where he wrote a paper on the attitudes post-Communist countries toward Israel.
Related Topics
Related Posts
Comments