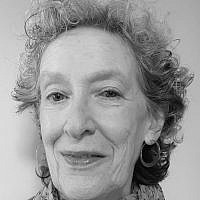 The Blogs
Bonnie Boxer
Apply for a Blog
Advertisement
Please note that the posts on The Blogs are contributed by third parties. The opinions, facts and any media content in them are presented solely by the authors, and neither The Times of Israel nor its partners assume any responsibility for them. Please contact us in case of abuse. In case of abuse,
Report this post. 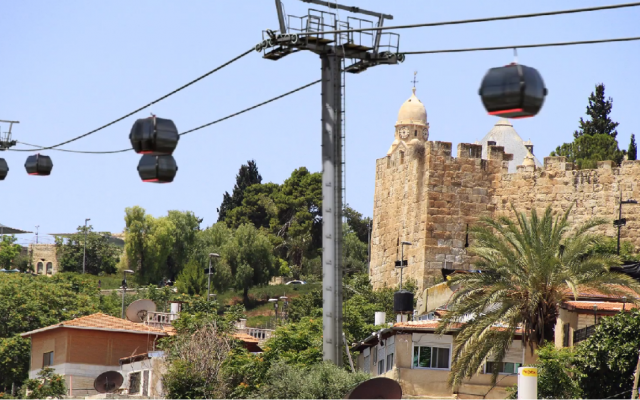 The planned cable car to Jerusalem's Old City, as seen in a screenshot from a video by the NGO Emek Shaveh.

Twenty years ago, I fought a plan for a cable car that would have slashed through and stolen the public’s unobstructed view of Jerusalem’s Old City and its surroundings, as seen from the ridge of hills at Armon HaNatziv, from the already built Haas and Sherover Promenades and the soon-to-be-constructed Goldman Promenade. At the time, I was the Israel representative of the Richard and Rhoda Goldman Fund, the philanthropic foundation that was providing the funding for the Jerusalem Foundation to construct the third portion of the promenade. The very point of these promenades was to create beautifully but simply designed public open spaces that would allow all visitors to see the unique view.

The proposed cable car would have traveled from what was then the Taverna Restaurant (aka Mrs. Sherover’s restaurant, adjacent to today’s Yes Planet) at the Abu Tor end of the Sherover Promenade, across the Peace Forest in the valley, over the Jabel Mukaber neighborhood, to make landing on the Goldman Promenade before ending at the hotel the same developer hoped to build.

At the behest of Richard Goldman z”l and Larry Halprin z”l, one of the best-known landscape architects of his time, a lifelong lover of Jerusalem who designed the Haas and Goldman Promenades, I was charged with fighting back against this scheme that left them both aghast.

I had an allies list, a group of organizations, institutions and individuals whom I updated on every development. Possibly most important among these were several neighbors on Naomi St. in Abu Tor, whose view and property values were threatened. Several of them had then-Mayor Olmert’s ear, as did Mr. Goldman. But the developer did as well.

In the end, the project never happened. Was it the pressure brought by the allies? Was it obligations the municipality had undertaken in its contract with the donor? Those were essential, but I suspect that what was decisive was the coming of the Second Intifada. The cable car was planned to pass directly over homes in Jabel Mukaber, and that did not seem like such a great idea in the violence of those days. Hard to draw investors or make a reasonable claim of future profits in such circumstances.

How can anyone who claims to be a lover of Jerusalem accept this violation of the sanctity and integrity of the protected landscape surrounding the Old City? Surely this is not the one and only option to solve the traffic problems of entering the Old City.

The motive force behind this project is Elad, the City of David organization, a controversial, very right-wing group seeking to Judaize the traditionally Arab neighborhood of Silwan through settlement and development of archaeological and touristic sites. These sites may, in and of themselves, be valuable, but they have been created in order to pursue highly disputed political goals and have trampled on the well-being of the Palestinian neighbors. The private investor of twenty years ago was no less cavalier in his approach to Arab residents of Jerusalem, but his aim was profit, not political action per se.

The proposed cable car will bring all its riders to Elad’s proposed visitor center. It will not only provide income for Elad, it will allow the controversial group to frame the visit to the Old City for an ongoing stream of tourists. For this, Jerusalem’s unique aesthetic is going to be defiled. It’s a money-maker and a propaganda opportunity, and all the rest – all the talk of solving traffic problems – is a bluff. Even someone who embraces Elad’s goals could love Jerusalem enough to object to the permanent damage to its treasured landscape.

As for a solution to traffic congestion, all this plan does is move the congestion somewhere else. It will bring the congestion, noise and air pollution to a far more populated area (German Colony and Baka, fair disclosure, my part of town). Derech Beit Lechem serves these historic neighborhoods as well as the growing neighborhoods to the south. The projected bus traffic will make this major artery impassable. Nor is there any consideration for the noise and air pollution this will bring to the First Station – Tahana Rishona, to the detriment of the people who work there and the hundreds of people who spend time there as well as on the adjacent Park HaMesila walking path, day and night. Does no one see us? Does no one care?

This dagger held above Jerusalem’s heart has received all the planning approvals and promises of funding it needs. Only the court can save us now.

About the Author
Bonnie Boxer made aliyah in 1980 and has lived in Jerusalem since 1984. For 15 years, she was the Israel representative of the Richard and Rhoda Goldman Fund, an American Jewish family foundation whose Israel giving was focused on environment and civil society, strengthening democracy, inclusiveness and progressive social values. Previously she was Foreign Press Spokesperson at the Jerusalem Municipality, working with Mayor Teddy Kollek z"l. She has been researcher, writer, editor and project manager for a variety of clients and currently consults for a number of not-for-profit organizations.
Related Topics
Related Posts
Comments