The Blogs
Paul Mirbach
(PEM)
Apply for a Blog
Advertisement
Please note that the posts on The Blogs are contributed by third parties. The opinions, facts and any media content in them are presented solely by the authors, and neither The Times of Israel nor its partners assume any responsibility for them. Please contact us in case of abuse. In case of abuse,
Report this post.
Yes, we lost. Badly.
We are staring into the abyss, stunned by the prospect that Israel, our Homeland that we dreamed of building and helping make flourish, is turning into a fascist state. Our dream and vision have been ripped from our grasp and replaced by a grotesque, malevolent mutation of what the Jewish State should be, where corruption is rewarded and rabid racism is hailed as the means to our redemption.
We are stunned by the realization that the country has violently swerved rightwards and our democracy is teetering on the edge of a cliff.
But before we drown in our despondency, consider the following:

With the counting of the votes finally done and dusted, more people voted *against* Netanyahu and his Axis bloc than for it; 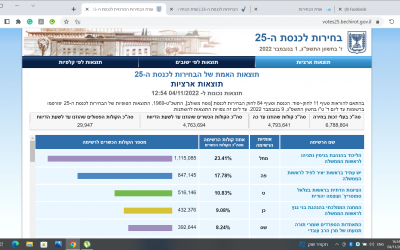 A picture of the election results, taken from the Central Election Committee for the Knesset’s public site.
The Bibi bloc received 2,303,964 votes and the Change bloc got 2,459,530. That’s a difference of 155,566 votes, in our favor. The clear majority he has in the Knesset is the result of a very flawed electoral system. But before we beat ourselves up about how the country has “swung towards extremism”, we can take some comfort in the fact that 50% or more still believe in decency.
The difference is that the Axis parties were organized and kept their eye on the prize, plugging every leak, whereas the Change bloc leaked votes Left and Center. We lost 285,580 votes to hubris, personal ambition, and petty bickering over semantic, irrelevant differences between the parties. Pointing fingers of blame is a futile exercise. The fragmentation of the Center-Left, and our pathological need to stress what sets each faction apart instead of emphasizing what we have in common, has plagued us for decades. The Axis coalition comprised four parties, and the Center-Left had no less than eight, each competing with the other over an inconsequential nuance, ignoring the imperative to bind together, seemingly oblivious of what was at stake.
We could have won, but we lost 285,580 precious votes because of nuance.
Neither Michaeli nor anyone else is personally responsible for that. WE, collectively, are responsible. Because we did not demand forcefully enough that they unite.
This cannot happen again. We need to learn to put the common goal before our parochial differences. We can make the flawed electoral system work to our advantage, instead of it hindering us. We need to demand better leadership and more responsible representation from those who ask for our support. And it needs to be a groundswell that they cannot ignore. Let’s do that.
We may have lost the elections, but I will not relinquish my convictions.
Some things will always stay constant.
An indicted Prime Minister for crimes of corruption will never be legitimate. A nation’s leader who always puts his personal interests before those of the country will never have my respect. While legally, by some quirk of legal anomaly, he can still be a Prime Minister, morally, he will never have my mandate. Half the country does not share this view. I don’t care. I will not submit.
As for the self-righteous assertion that he is “innocent until proven guilty”; by the same standard, should a mayor indicted for the rape of a municipal worker still be allowed to be mayor, even if it means that he can use his position and power to intimidate the victim and witnesses? And should a Minister accused of embezzlement still be allowed to work, so that he can have access to destroy incriminating documents? We all know the answer. And so, he may be Prime Minister, but I will never recognize him as MY Prime Minister.
Similarly, fascism should never be afforded legitimacy.
Ben Gvir’s campaign slogan was “the time has come for Ben Gvir.”
I want to be crystal clear: NO time is an appropriate time for fascism, ever! No Armani suit and silk tie will afford Ben Gvir or any of his cadre of thugs, respectability. Ben Gvir – all of them – should be repudiated, not crowned with ministerial positions. I for one will never normalize fascists, wherever they are, or whatever post they hold.
This government about to be formed, conceived in sin when Netanyahu aggressively squeezed him through the door in the last elections, will carry the stain of corruption and racial hate from the day of its inception. A government that includes a fascist party and has fascist ministers is a fascist government. Full stop. Just like the Vichy government, which collaborated with the Nazi conquerors was a fascist government, so will this government that cooperates with Ben Gvir be stained the same. And Netanyahu will be “our Marshall Petain”, subservient to the demands of Ben Gvir for his political survival. He too will be remembered in ignominy.
And I will never recognize a fascist government as a government that represents me. Ever.
I will resist.
We all should.
“The darkest hour is just before the dawn.”
About the Author
Paul Mirbach (PEM), made Aliya from South Africa to kibbutz Tuval in 1982 with a garin of Habonim members. Together they built a new kibbutz, transforming rocks and mud into a green oasis in the Gallilee. Paul still lives on Tuval. He calls it his little corner of Paradise.
Related Topics
Related Posts