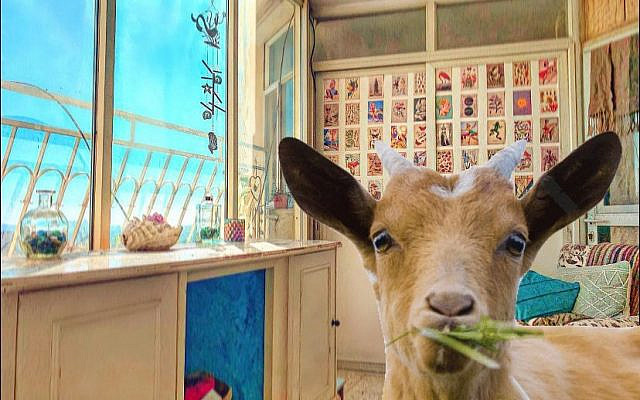 There’s this story from our old shtetl days that my gramma used to tell me, and it goes like this:

Once, there was a poor man who lived with his seven kids in a tiny hut in his little shtetl. The kids kept getting bigger. But the house wasn’t getting bigger. In fact, it was so crowded the house seemed to shrink. The kids would bicker from dawn til dusk, his wife would nag and shout, and the poor man couldn’t get a moments peace.

So he goes to the rabbi as one does in the shtetl and he says to the rabbi, “Rabbi what do I do? There’s no room for anyone to move in our tiny house and we are miserable!”
The rabbi looks at him and nods his head.
“Do you have a goat?” The rabbi asks.

“So, go home and bring in the goat,” the rabbi says. “Come back before next Shabbos and tell me how you’re doing.”

The man is perplexed but he trusts his rabbi and so he does just as the rabbi said.

Well – shocker – the man is even more miserable with the goat milling around and knocking stuff over and chewing all the bed sheets. His kids are crying, his wife is screaming, and there’s no room to even breathe let alone turn around.

So when the poor man goes back to the rabbi, and the rabbi asks with a twinkle in his eye how the week went, the man breaks down in tears.

“Rabbi, it was a nightmare!” the man sobs. “My kids are miserable, my wife is miserable, I am miserable.”

“Alright,” the rabbi says “go home, take out the goat and come back after Shabbos,”

So, when Shabbat ends and three stars twinkle in the sky, the man is practically dancing down the road to the rabbi.

In other words, happiness is all about context and – yes – it can always be worse.

Well, turns out, goats don’t just live in houses in shtetls back in the day. They can go anywhere at any time, and they do, and I know this to be true because just last week, on a long, hot morning, here, in my living room in Jerusalem, was a goat.

A hairy, smelly billy goat with big old horns and muddy hooves and a tangled beard just clomping around my apartment.

I don’t know how he got in — I’m pretty good about locking the door because who needs a goat? — but there he was, bumping into the furniture, chewing on the corner of the sofa, tearing the throw pillows with the little mirrors embroidered on them with his horns, seconds away from knocking over the bookshelf, eating my books, and peeing all over the carpet.

Ok, it wasn’t REALLY a goat. But it also WAS really a goat. Give me a minute and I’ll explain.

I was having one of those last dregs of summer days — I’m sure you’ve had them too. The kind of day where it felt like I hadn’t slept in months, where the rumble of the trucks outside the window set my teeth on edge. It was hot out – a thick, viscous heat that shimmers like a shockwave when you open the window or dare to step outside. Work was on full blast. The phone wouldn’t stop pinging. My youngest kid needed me constantly, one thing after the other. My skin felt itchy. I hadn’t had coffee. I was hungry and tired and restless and overwhelmed and bored all at the same time.

And then – suddenly – there was a goat in my living room, bold as you please mucking up my apartment with his hooves and horns and heady stink. 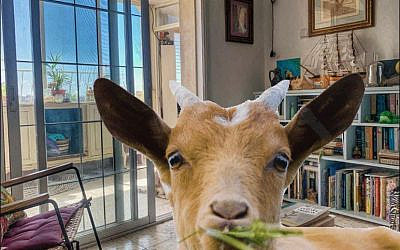 Ok, not a REAL goat. But the power went out and it sure FELT like a goat.

Because with the power, everything connected to the power was gone, too. The lights. The internet. The phone charger. The fridge and the freezer (and with it my Mint Cookie ice cream.) And the AIR CONDITIONER.

Sometimes, silence is a respite, soft and peaceful. And othertimes, it’s deafening. And when you’re in the middle of work and relying on a little Dr. Dre to entertain your kid, and the heat outside is legit oppresive and the only thing keeping you from losing your shit completely are the lights, the air, the Internet, the music, your phone, and the knowledge that inside your freezer is a pint of your favorite ice cream, then the silence is a nails on the chalkboard kind of silence.

At first I thought it was my bad – I had gotten one of those “don’t forget to pay your bill” notices already, and I know I forgot to pay my bill a little longer than I should have. (Even though I’ve lived in Israel 12 years, I still get nervous when it comes to paying bills in Hebrew. I don’t have many shekels to begin with, and I like knowing exactly where they’re going and in English, thankyouverymuch.)

This wouldn’t be the first time that the power company pulled the plug on me.

So I called them, and while I was on hold — watching my phone battery drain before my very e eyes (41%, 38%, FML 34%) — I decided to check the fusebox. A real cost/benefit dillema: On the one hand, maybe it was a simple fix, and I just blew a fuse. (Wouldn’ be the first time, either) But on the other hand, opening the front door in the middle of the heatwave means letting what’s left of the cool air out of the apartment, and letting the hot air in.

I did it anyway – yeah, what can I say, I’m a risk taker and an optimist – so I opened the door as little as possible and I sidled out. The hallway felt like walking into a hot mouth that knew not toothpaste. Foul, fetid, steamy – and also, unusually dark. I didn’t remember ever seeing the hallway that dark before. So I turned on the hall light – the kind that all Israeli apartments have in their stairwells that stay on barely long enough for you to get up the stairs let alone find your keys.

The darkness remained, sullen and insistant.

This, believe it or not, was actually good news. It meant that the power outage wasn’t apartment specific. It meant I wasn’t totally delinquent in paying my bills. It meant that my neigbors and I were all in this together.

I’m in this neighborhood WhatsApp group of other English speaking women – it’s a spectacular group of women here in south Jerusalem where we share recipes, kids toys, and traffic updates. It’s a portal for organizing meal trains when someone is sick and unable to cook – Gd Forbid – or gives birth – only simchas! I’ve seen people literally borrow cups of sugar on this group. And today. It became our base of operations for power outage updates.

It wasn’t just me.

I nearly dropped the phone.

I thought I was hearing things – or maybe there was a ghost in the hallway – and then I remembered I was still on hold with the electric company.

“Hi, sorry,” I said, and I told her we didn’t have power, but that it seemed to be a neighborhood issue.

“I’m looking at your account and I see you still need to pay your bill,” she said.

“How about you fix the power in Jerusalem, and then I’ll pay the bill,” I quipped.

“You’re right. You shouldn’t pay for power when there is no power,” she said. “But maybe if you pay, and when it comes back on, you can tell everyone how you’re the hero who brought back the power.”

Back in the apartment, my ice cream no doubt melting, the air heavy and hot, my youngest whining, and I could hear the goat stomping around and chewing on the furniture and ramming my bookcase with his horns. I felt trapped, defeated, and utterly exhausted. How would I keep us cool AND manage to work AND hold it together until the power returned? 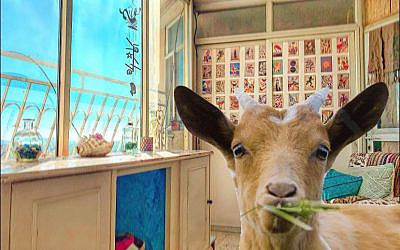 And then – suddenly – the light flickered twice and my WhatsApp pinged “it’s back on!!!!

The air conditioner rumbled and grumbled awake , the fridge grunted and heaved back to life, the lights were on and ever so cheery, and just like that, the goat was gone.

And – suddenly – the fatigue from before lifted. The restless boredom, the gritty drudgery of each and every day, the ever growing list of tasks and needs and demands that weigh on me… it all lifted.
I felt joyful. I felt strong. I felt… light

I had the power to do it all.

It’s true: Just as my gramma’s story taught me, happiness is all about context and it can always be worse.

So I plugged in my phone (8%… 12%… 18%…) had a big bowl of Mint Cookie ice cream, and enjoyed one of the best days I’ve had in a long, long time now that the power was back and the hairy, smelly billy goat was out of my living room.

About the Author
Sarah Tuttle-Singer, author of Jerusalem Drawn and Quartered and the New Media Editor at Times of Israel, She was raised in Venice Beach, California on Yiddish lullabies and Civil Rights anthems. She now lives in Jerusalem with her 3 kids where she climbs roofs, explores cisterns, opens secret doors and talks to strangers, and writes stories about people. Sarah also speaks before audiences left, right, and center through the Jewish Speakers Bureau, asking them to wrestle with important questions while celebrating their willingness to do so. She also loves whisky and tacos and chocolate chip cookies and old maps and foreign coins and discovering new ideas from different perspectives. Sarah is a work in progress.
Related Topics
Related Posts