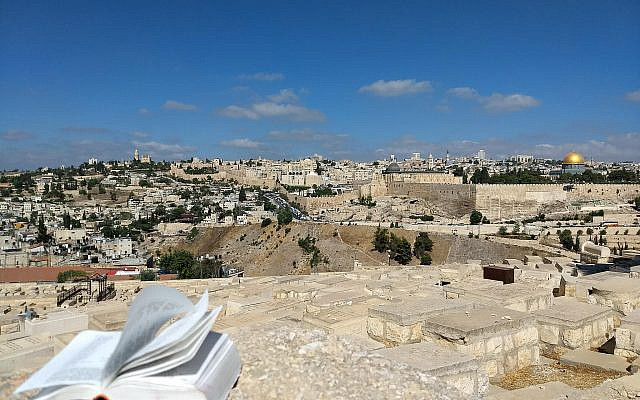 “Ima,” asked my son this morning, “how come we mark the day when the Temple was destroyed but not the day when it was created?”

I didn’t really register the question at the time. There were meals I had to cook and a mischievous toddler I had to keep an eye on and a “don’t spill this!” to screech out and a “please finish your breakfast!” to say (twice), and then say it louder, and once again for good measure…

But later, as I was cleaning the spill and restraining the marauding 3-year-old and arbitrating three petty arguments while chopping vegetables, my son’s question wormed its way into my consciousness. I looked around me, at the messy reality of raising children, at the ever-shifting construction project that is life itself, and thought – you really can’t mark the day when something is created. Creation is a process. It happens in all the moments, in all the messes, but it can’t be contained in any one of them. It can’t be quantified and dated.

It can never be declared complete.

The Temple might have been completed, as a structure, at a particular date. The workers who built it might have hit a moment when they could pack their tools and go away. The scaffolding could be removed, and the doors could be opened to the public.

But this was only the beginning of the Temple’s creation. And the important bits, the bits that mattered – they came after.

Whenever a farmer brought his first fruits to Jerusalem, whenever Jerusalem’s kids ran out to welcome pilgrims, whenever someone, anyone, raised her face to the mountain and saw the sunlight on the Temple and felt something, anything, even a modicum of awe – the Temple was created.

Each of these moments, and each of the other moments like them, was worthy of celebration. In fact, each of them WAS a celebration – a celebration of some deep internal impulse, of a sense of intimacy and connection with that which we can never fully comprehend.

And it is these moments, these celebrations, that we mourn today. The building may have been glorious, sure. But it was just that – a building. By the time Titus’s men lit the torches that burnt the Temple down, the building was already a cadaver. Its meaning and its soul had fled, as the sages taught us, when the People of Israel stopped living the ideals the Temple stood for. The building was important because it encompassed an ever-evolving relationship with God, an ongoing act of creation. Without the relationship, it was but mortar and stone

God’s relationship with Israel, as the prophets proclaimed in no uncertain terms, can never be wholly separate from our relationships with one another. The First Temple was destroyed, they taught us, when the people adopted idolatry –  but also because they raped and killed and exploited the poor and the helpless. The sages taught the same message when they said that the second Temple was destroyed due to “sinat chinam” – baseless hatred.

This particular turn of phrase always puzzled me. After all, our hatreds and dislikes are rarely baseless. When do we hate someone for no reason at all?

Perhaps, though, our hatred isn’t “chinam” or baseless because we have no reason to hate, but rather because our reasons are, in truth, inconsequential. They may loom large in our perception of reality; they may haunt us, gathering momentum as we nurture our wounded feelings. But if we were to examine whatever it is that we hate about another person in the context of the fullness of their being, would such irritants continue to loom large? Would they continue to appear as a legitimate basis for strong hatred? If we were to look for unverbalized intentions and mitigating circumstances, hidden motives, pains, and joys, would whatever it is a person did or said appear as horrible, as offensive, as worthy of a strong word such as hate?

In the Temple, we constantly recreated and expanded our relationship with God through a variety of moments and actions and experiences. And today, we mourn the loss of all those moments.

But if we want to revive the spirit of the Temple, mourning in itself is not enough. And as we remember all those celebration-worthy moments, it behooves us to invest in expanding our relationships with other people, to the point where we gain enough perspective and intimacy to let go of what is, at its core, a baseless hate. Perhaps then we can be worthy of a Temple-like relationship with what lies beyond the grasp of our humanity, free to truly live and truly love.

Today, we are mourning a destruction.

About the Author
Rachel is a Jerusalem-born writer and speaker who's in love with her city's vibrant human scene. She writes about Judaism, parenting and life in Israel for the Times of Israel and Kveller, and explores storytelling in the bible as a teacher and on 929.
Related Topics
Related Posts
Rachel Sharansky Danziger
Comments