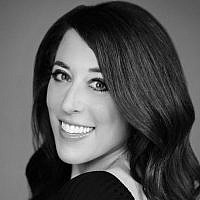 The Blogs
Malka Fleischmann
Apply for a Blog
Advertisement
Please note that the posts on The Blogs are contributed by third parties. The opinions, facts and any media content in them are presented solely by the authors, and neither The Times of Israel nor its partners assume any responsibility for them. Please contact us in case of abuse. In case of abuse,
Report this post.

Some years are challenging. This past one was my hardest yet. And so, it made sense that when, last month, my colleagues and I gathered for a Zoom-based Passover text study, I furiously blinked away tears, hoping no one would notice my disproportionate reaction to our discussion of liberation.

As my co-workers basked in the beauty of the holiday’s narrative, I felt disappointment. Grief, even. It’s Passover, I silently pleaded. I want my freedom.

I had found myself at a crossroads—the kind that so many of us encounter, which necessitates the excising of a toxin, whether found in a friendship, relationship or environment. I needed to catalyze positive change. And so, elevating the tiniest of brave voices above the terribly depleted all else of me, I made the impossible yet necessary decision to extirpate a demoralizing force that had, over the course of a year, devastated me. And then, come Passover, the unsettled emotions swirling within me articulated themselves—

Haven’t I earned that long-anticipated wash of relief? I wondered. I freed myself, so why don’t I feel free?

But, the following week, as my family’s shrunken-by-pandemic Passover gathering considered the text of the Maggid, I remembered something about myself. Something that always delighted my mind and stoked my imagination.

I have always loved the fact that the Jewish people’s origin story only begins at Passover and culminates, after dramatic, desert-based growing pains, first in the reception of the Torah, soon to be celebrated on Shavuot, and then in entry to the Promised Land. Throughout the haggada and our sacred texts, distinctions are made between God’s removing us from Egypt (hotzianu) and redeeming us (ge’alanu), as well as between our entrance into freedom (cheirut) versus the state of redemption (geulah). We see that, while liberation happens in mere moments, redemption is a longer, unfolding and layered process, one that requires many-miles and much time. One through which hope in that deliberate and painful unfolding must carry us.

And so, as my family read the final blessing of the Maggid portion (“…we shall thank You with a new song, upon our redemption and upon the restoration of our souls”), I felt my body relax. I remembered my love of our nation’s process. I remembered my faith in it.

Over the past month, I waded deeper into the commentary about the redemption process, and my mind wandered to the memory of Gilad Shalit’s return from his Gazan captivity. Jewish hearts the world over swelled with joy as they watched footage of Shalit’s flight home, his being greeted by the Prime Minister and his father’s embracing him for the first time in five years. Yet, even so, we also knew that the soldier’s gaunt frame and pale skin portended an achingly long and fraught road to recovery. Shalit was, at once, an embodiment of long-awaited freedom and a stunning portrait of trauma ongoing. Liberated, but not yet redeemed.

I wonder if, in the ensuing months and years, he grew impatient with himself and his body’s own enduring trauma, belied by smiles and celebrations. I wonder if his family and friends too soon assumed that his return was complete. In a world in which we’re used to a sound’s growing louder in approach and diminishing as it recedes (Doppler Effect), it’s hard for us to understand when a person experiences internal cacophony, though the source of the sound has long been in his rearview.

I think, too, of Bob Marley’s Redemption Song. Emancipate yourselves from mental slavery; None but ourselves can free our minds. An acknowledgment, within the lyrics, that enslavement expresses itself in multiple stages and locations—some are conspicuous and directly established at the hands of an enemy, but others are echoes of those, that, like wind-swept dandelion seeds, are carried by time and invisible forces into hard-to-reach parts of us. And then, as they vigorously spread, the work to obliterate them is lengthened and more complicated, and it becomes ours alone.

Now, as we remain locked in Corona’s clutches, imprisoned by six feet’s worth of yearning for closeness, we await our freedom. But, with a sick feeling, we look to the year(s) ahead, knowing that there is more trauma—more change, loss and unfamiliar territory—lying in wait. Will there be camp in summer? Will there be school in the fall? Will we lose our jobs? Will we lose our money? Will we lose each other? Where will Judaism go, if not to shul? Where will people eat herring on Saturday mornings? When will grandparents reunite with their children and grandchildren? When will distanced couples come together again? When will singles be able to overcome their solitude? When will we recommence weddings, funerals, sports, theater and conferences, and, when we do, will we have to wear our masks and gloves in order to attend?

And, amid all of this anxious wondering, there is the complicating factor that this trauma is happening to all of us at once, while affecting each of us uniquely and at different rates. How do we find redemption as it unfolds across sun-governed universal time when we are, each of us, moons in separate houses, with little or no synchronization of inner life? What if, when all of this “ends,” some of us remain in turmoil? What if we all do, but, for the sake of the economy and children and politeness and water-cooler culture, we pretend we are alright?

In thousands of synagogues across the world, Jews refer to the State of Israel as the “first flowering of our redemption”—a nod to the fact that redemption doesn’t come, like sunshine, in a momentary burst, but, instead, waxes like the moon. It is something that is realized in subtle phases and in partnership with time, intention, love and grace given.

Sometime relatively soon, we will be free. But, as all victims of trauma know, freedom is only the turn of a key in a lock. Redemption demands so much more of us, and, ironically, demands it of us when there is so little left—when we are safe, but our minds and bodies feel phantom threats; when we are exhausted, but assumed to be rejuvenated; when we are still sad, but expected to celebrate.

So what will we do?

Many people are optimistically forecasting tectonic shifts in our work-life balance or radical changes to our healthcare system or reinvented models of childcare and schooling. Perhaps. And, where it would better us, I certainly hope so.

But there’s another tectonic shift for which I pray—

What if, along this road to redemption, we saw only teammates? What if we became a society in which we all assumed best intentions, always? What if, when we looked at one another, we accepted our ignorance of each other’s inner lives as invitation to be kind and to grant berths as wide as each person’s burdens demanded? What if we just knew that we are, at once, in this mess together, but always strangers to each other’s unique interiors?

To shoulder this redemption process together while each of us also shoulders it alone, we will have to be kinder than we’ve been. We will have to approach each other gently and with curiosity because trauma is a complicated science and largely invisible. We will have to assume that where we find people is not necessarily where they find themselves. We will have to accept that, though, through government-ordered closures and re-openings, we may synchronize movement, we will never be able to synchronize feeling.

We will move forward—both together and alone. And the best we can do for one another is to remain patient while we demonstrate awareness of the fact that what we share, despite all of our differences, is the great unknown.

About the Author
Malka Fleischmann is a writer and educator living in Manhattan. She is passionate about Judaism, love, education, literature and interfaith work. A graduate of the University of Pennsylvania and Harvard Divinity School, Malka is also a Wexner Fellow-Davidson Scholar and M2 fellow and has roots firmly planted in Camp Stone. Her writing has been published in the New York Times, the Jewish Week, Tablet and in Maggid Press' Gleanings: Reflections on Ruth.
Related Topics
Related Posts
Comments