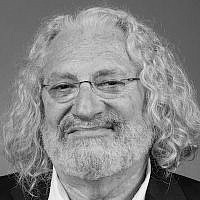 The Blogs
Joseph A. Edelheit
Apply for a Blog
Advertisement
Please note that the posts on The Blogs are contributed by third parties. The opinions, facts and any media content in them are presented solely by the authors, and neither The Times of Israel nor its partners assume any responsibility for them. Please contact us in case of abuse. In case of abuse,
Report this post.

There was an announcement that CUFI’s annual gathering of Evangelical Christian Zionists will be virtual this year in June. This year’s meeting will come with even more political impulses, a US election year, a new Netanyahu government in Israel, possible annexation plans and the new Shelanu, Israel’s newest cable station for Christian evangelism.

I suppose COVID-19, establishing a new Israeli government, Shavuot, and in the US the urban protests and violence, all combined to create the chaos which has distracted the Jewish community. I was sure that there would be a profound outcry when Michael L. Brown, a Jewish believer in Jesus, wrote in Haaretez,

“But please don’t tell Christians who dearly love Israel and the Jewish people, ‘We welcome your support and your money and your political influence and your service. But keep your message to yourself.’ What kind of friendship is that?” When I read the statement of an Israeli who runs Shelanu, “The messianic (sic!) community serves in the IDF, is Zionist in nature and we pay our taxes. We are entitled to the same rights and freedoms as every other Israeli.” The individual asserting this argument was born a Jew in the United States, who made Aliyah and now accepts Jesus as his savior, but still remains in his mind, a Jew. Why are such wild assertions being ignored.

In the absence of my expectation, I am reminded in this week’s Sidre, Naso, of why Nachshon ben Amminadab was given the honor of bringing the first offerings in the dedication of the Mishkan. Rabbinic tradition illuminates this leader from the tribe of Judah as the ultimate example of Jewish behavior in the midst of chaos. Standing at the shores of Yam Suf, Moses stood on a rock praying to God, while the people waited in fear of the unknown as Pharaoh’s army approached. As various leaders cried out, I do not want to be the first to jump into the water, Nachshon instinctively understood that action would motivate others, so without a single committee meeting or task-force report, he jumped into the waters. When the Holy One saw the actions of this one individual, the waters began receding, and the whole people began to engage in hope rather than despair.

Surely, GOD-tv, CUFI, the polarizing discourse of both Israeli and American politics would stimulate the Nachshons of our day. A poll published two weeks ago by the Pew Research Center showed that white evangelical Christians give Trump a better grade on his handling of the coronavirus pandemic than any other religious and demographic group in America. In the poll, 75 percent of respondents who identified as white evangelical Christians said that Trump has handled the crisis in an excellent or good way. Israel has accepted the passionate American Evangelical Christian support that elected Trump. Christian Zionism has become the primary resource of political power that links Israel and the current US administration. The issue of ‘God-TV’ brings forth those who claim a title that abuses truth; that Jews who believe that Jesus is their savior should be engaged as ‘messianics’ who have militant theological goals of evangelism.  Netanyahu and Trump have both decided to embrace this predominantly white Christian Zionism that has produced votes, political influence and an extraordinary amount of money. When tens of thousands of Evangelical Christians visit Israel, they bring money and their religious need to experience the Jewish roots of their Lord and Savior, Jesus. Many of them will not acknowledge that their acceptance of salvation transforms them into Christians.

I am willing to imitate Nachshon, hoping that my behavior will stimulate others to follow. There are so many crises with such dangerous levels of risk, that again this persistent community of militant Evangelical Christians, might be dismissed. But I worry that  Shelanu and the influence of such Christians on political discourse through CUFI, money, and the coming US elections will enhance and strengthen the communal legitimacy of this group.

Jewish communal leaders must stop and ask themselves just a few questions. Why have we decided to accept the unconditional support of Christian Zionism, if they simultaneously support and use Jewish converts to Christianity as their most militant evangelical representatives? Why does the Jewish media continue to accept their mendacious discourse which normalizes their claim, that Jews can belief in salvation and live Jewish life at the same time? Would the Federations and JCRC’s include their churches, that claim a synagogue identity, in their security plans and protection against antisemitism?

Why do revered academic associations such as the Society of Biblical Literature and National Association of Professors of Hebrew permit ‘peer’ reviewed seminars and publication of ‘scholarship’ from Christians claiming Jewish identities? Should the professional communal leaders respond to claims that ‘discussion, debate and academic engagement’ with these individuals  will not hurt Jewish life?

Both Netanyahu and Trump undermine truth itself in their relationship with the media. They assert, claim, tweet, argue, and simply deny facts, science, and historic reality in order to sustain their sources of power. The lead attorney serving Trump during his impeachment trial is a Christian who claims a public identity of a Jew who seeks the conversion of Jews. Many of those who pray with and for the President in the Oval Office use Jewish ritual objects in their television ministries, objects that they have purchased in Israel to use in their churches. Is the Jewish community ready for Vice President Pence to bring another Christian who shamelessly claims the title ‘rabbi’ to a memorial service for murdered Jews? Why are Jewish leaders silent about those who publicly misuse Jewish objects and practices during their Christian worship? This silence adds to those who want to create a political world in which there is no difference between truth and falsehood. Regardless of the decades of abusive language, it is historically and factually impossible for Jews to be both saved by Jesus and live as Jews.

I am no longer a strong swimmer, but I will stay in and under the water for as long as needed, to get the attention of today’s Jewish leaders. The time has come to answer those who feel entitled by their support for Israel, even their Israeli citizenship, and those who are among the most powerful allies of this US administration. Protestant Christians must be accountable for militant Evangelicals who deny truth in the pursuit of their understanding of Salvation.