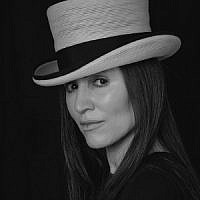 The Blogs
Deborah Jacobi
Apply for a Blog
Advertisement
Please note that the posts on The Blogs are contributed by third parties. The opinions, facts and any media content in them are presented solely by the authors, and neither The Times of Israel nor its partners assume any responsibility for them. Please contact us in case of abuse. In case of abuse,
Report this post.

Hilary Clinton’s right hand woman, Huma Abedin, has misled the FBI. Abedin, Clinton’s former deputy chief of staff, signed an FBI document under oath claiming she had provided all her electronic devices which contained private emails from Hilary. Last week 650,000 emails from Hilary were found on Weiner’s/Abedin’s Ipad. Whether these emails are old or new belies the fact Abedin perjured herself.

Clinton used 13 Blackberries and 5 iPads for her private email servers. Following a subpoena by Congress and the FBI, Hilary bleached 33, 000 emails into ruination and then hammered them to death. Now one has to wonder if Abedin was also party to destroying devices and/or emails.

The law is of absolutely no consequence if you are Hilary Clinton or on her team. Breaking the law matters little to those who hover above it.

The media fumes when Trump utters “Nasty Woman” and then they melt like an ice cap in the Sahara when “Nice Women” break the law.

This week Donna Brazile, who worked simultaneously for CNN and the DNC, (the usual biased reporting) was fired by CNN for providing Hilary with debate questions prior to the debates. Any consequences for Brazile or Clinton? Any outrage from the debate organizers? Has any legal affiliate stepped forward with intent to challenge the cheating? Nothing disqualifies Clinton, but if Trump had cheated he would be hung by the press before dawn and advertisements questioning whether we want a cheat for president would flood our brains like a tsunami.

As for Brazile’s future? This week she was awarded the interim chair at the DNC, presumably for her loyalty and honorable actions in support of her party.

When questioned about her reckless handling of classified information, Clinton, the sophisticated and experienced former secretary of state who has worked in politics for over 35 years, declared she had no idea “C” stood for classified. Perhaps she thought “C” stood for covert or corrupt.

Huma Abedin’s previous emails were shown to contain 1,818 classified emails. 22 were “Top Secret.” In all 81 of Clinton’s emails were found to be classified. Clinton still has access to top secrets and classified information. Now 650,000 emails are in question. Abedin, who is Clinton’s campaign manager, has been whipped off the campaign trail and is noticeably out of sight of the press.

FBI director James Comey, as promised, notified congress last week after the 650,000 thousands emails were recovered. He may well have hastened to do so as Julian Assange of Wikileaks threatened to release more emails this week, even though his wifi hands are tied. The last thing the FBI needs right now is to be embarrassed by the efficient and transparent Wikileaks. Yet Comey has suffered outrage from the Democrats over the timing of his letter to congress. The Democratic Party blames Comey for Abedin’s disregard of the law. The Democratic Party has shown no concern for our national security.

Perhaps it’s time for a constitutional amendment that better defines equality for all under the law. Our justice system, which has been failing minority groups for years, is crumbling rapidly like the Tower of Babel. Both presidential candidates have exhibited odious and disgraceful behavior throughout this tempestuous election season, but the blatant betrayal by our Justice Department is the most disconcerting and aberrant manifestation of all.

About the Author
Deborah Jacobi is a holistic health coach and founder of Time To Think Healthy. Her new book The Intimate Act of Eating is due to be released this Summer. Connect with Deborah at Timetothinkhealthy.com and on Facebook.
Comments