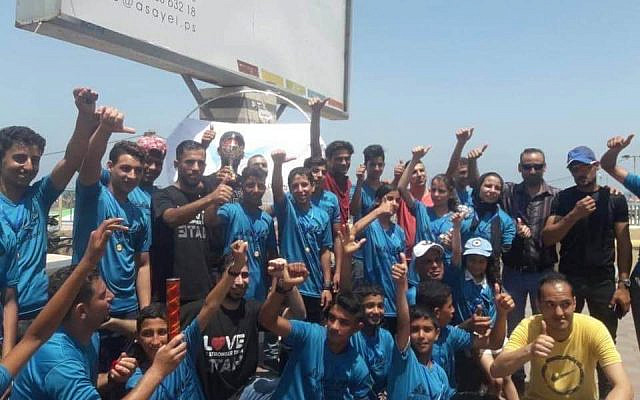 Palestinian activists in Gaza ride bikes for peace in a joint Palestinian-Israeli activity in 2020. The onset of the pandemic put a damper on negotiations and outreach efforts. (Photo republished with permission from the Gaza Youth Committee)

Two years ago, I published an article here about why I was voting for Meretz for the first time. It seems like a century ago. In 2019, we were living in a very different world.

After so many rounds of elections and a pandemic that has turned our world upside down, it may be difficult for many to remember the seemingly insignificant issue (by comparison) that led to the dissolution of the 20th Knesset and the election purgatory we remain trapped in. It was November of 2018, and a round of fresh violence had flared up on the southern border. Rockets were launched, bombs were dropped, and in the end, the same uneasy stalemate that had preceded the skirmish returned. As part of the ceasefire conditions that were reached, Bibi approved the resumption of fuel transfers to the Gaza strip. It was at this point that the Defense Minister, Avigdor Lieberman, accused Bibi of surrendering to Hamas and resigned, a move that triggered a cascade of events leading to new elections.

Do you remember when these were the extent of our political troubles in Israel? It seems so long ago, and even a bit presumptuous, when we could gamble so cavalierly with our future, gazing in hindsight from our new reality of shutdowns and quarantines and daily death counts.

But all was not well in paradise, even then. In many ways, Israel was as much a powderkeg then as it was today, if in ways less conspicuous to the casual observer. As Bibi explained in response to Lieberman’s attacks, his agreement to transfer fuel to the Palestinians was the result of a growing humanitarian and ecological crisis on the Gaza border, one that was rapidly becoming a security and public health threat to Israeli citizens. The lack of fuel and, consequently, lack of functioning power plants and sanitation plants in the strip had caused the rapid erosion of the coastal aquifer, Gaza’s main source of water, leaving it poisoned and unusable. The poisoned aquifer and pollution in Gaza had already led to a temporary shutdown of one of Israel’s largest water desalination plants.

Perhaps most importantly, apart from the direct impact the crisis was having on Israelis, these conditions had finally put to bear on Hamas the sort of pressure for change that Israel itself had never managed to generate on its own. In late 2018, Israel was engaged in intensive indirect negotiations with the Palestinian factions in Gaza to reach a long-term ceasefire and rebuild the strip. On the table were prisoner exchanges, more open borders, the construction of sanitation and travel infrastructure in Gaza. To put it in context, that round of violence in 2018 was only a small, visible part of those negotiations. The successful completion of such an agreement would have been a paradigm shift in our relationship with the Palestinians, one with the potential to break through the stalemate that had lasted over a decade and bring us closer to a lasting peace with our neighbors.

Then Lieberman happened; round after round of elections happened; and finally, the pandemic that crushed our ambitions and seemed to permanently remove Gaza and the Palestinian issue at large from our collective consciousness. No longer was Bibi concerned with pursuing Israel’s long-term interests and making concessions for peace. Not in a perpetual election season, and certainly not when no one was looking.

Many things have changed since 2018. But here are some things that have not: The coastal aquifer remains on the brink of collapse, and the lack of clean water and power is exasperating the effects of the pandemic in Gaza. Rockets continue to trickle on the south. We remain locked in a fragile impasse with our neighbors, an impasse no less frigid for the peace agreements reached with more distant adversaries. Those agreements have left the Palestinians feeling more isolated and desperate than ever before. It is on the backdrop of these rising tensions that Ismael Haniyeh recently congratulated Yahye Sinwar, a militant hardliner, on his election victory to remain at the helm of Hamas in Gaza. The election was barely noticed in Israel, but it should have set off alarm bells that whatever goodwill we had secured with our southern neighbors is rapidly disintegrating.

While we’ve been preoccupied with our internal troubles, the world has not stood still. My own children have gotten older and begun to notice more things about the world around them. Time continues its relentless march. And as the vaccine drives begin to take their toll and we slowly return to a world of political squabbling and sudden bursts of violence, it is increasingly evident to me, as a patriot and as a parent, that we are running out of time to bring the changes we’ve promised our children. Soon it will be their turn to don the chafing uniforms and face the impossible choices they’ve inherited from us. I wonder then if they will judge us more harshly than we judge ourselves?

Several people have asked me in the last week why I insist on voting for Meretz, rather than Labor, when both seem so nearly aligned on their social agendas, and Labor seems so much more palatable from a centrist perspective. I won’t deny that I’ve had my moments of doubt. I know that Labor is fielding a strong, democratic and Zionist list that will prioritize many of the issues I care about. And I know that many of my socially-minded friends and relatives will be voting for any number of Center-to-Center-Left parties, all with the same goal of unseating Netanyahu and bringing real change to our country.

And yet I find myself unable to abandon that glimmer of hope that shined, before the world seemed to collapse around us. Back in 2018, when there seemed, for the first time since I immigrated to this country, to be real potential for change on both sides of the border. I remember the excited talks, the position papers and drafts that I and my fellow activists — Israeli and Palestinian alike — exchanged and annotated and debated with each other. The sacrifices some of those friends made for peace, and how breathlessly we watched as the machinery of government seemed to slowly grind, for the first time, in our favor. And how heartbreaking would it be, after all that has transpired, for us to let that opportunity disappear before our eyes, simply by forgetting that it was?

I know the peace process is last on anyone’s agenda today, and furthest from the minds of our elected representatives in particular. But if there is one list I can count on not to let any of us forget, it is Meretz. They will continue to drop those buzzwords in the papers and at committee meetings without hesitance, to responses ranging from embarrassed to amused to incensed. They will continue to be unpopular and awkward and chided for speaking out of turn. And they will continue to talk about peace until someone, anyone, will listen.

It’s so easy to be tempted by the soothing populism of the media personalities and their centrist coalitions. Or to let sleeping dogs lie, at least until things calm down a little. But as the vestiges of the plague disperse, so do the hopes and dreams that we came so close to achieving. This is not the time to lay our ambitions aside, but to pursue them all the more relentlessly, with all the new opportunities providence or circumstance have provided us. We have an abundance of vaccines and PPE equipment, and we have neighbors in need. We have fuel, water and medicine that could be translated into goodwill enough to transform the diplomatic landscape. There is so much remaining for us to achieve, so much more we could leave for our children, while they are still children – if we are but reminded to.

We are living in a world emerging from a bad dream, and in that emergence, there will be transformations large and small, some by circumstance, and some by design. Israel emerges from this bad dream stronger than most, and with opportune elections granting us the chance to determine our trajectory anew. We have the power to reshape our region and our world as it should have been from the start, to establish novel relationships of trust and mutual respect with our neighbors. We’ve done it with so many other countries – why not here? The momentum is here. The opportunity is here. Do we dare not to seize it?

Tomorrow I’ll be voting Meretz, tired and true, never forgetting those dreams. Perhaps some of you out there will as well.