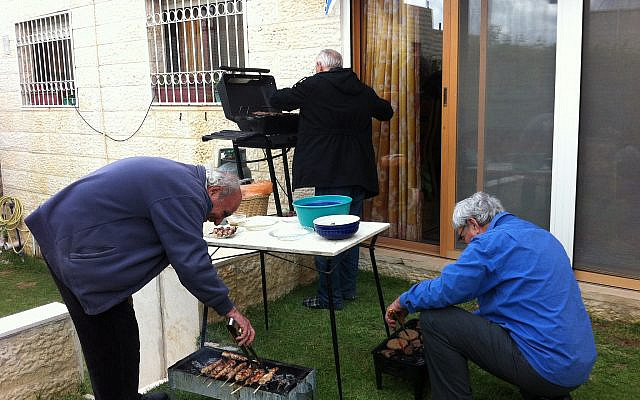 Another Independence Day. Another day in which the aroma of roasting meat fills the air wherever you turn. My OH and I are as guilty as anyone else of adding to the general consumption of meat on that day, and enjoy spending time in the open air with friends, because that’s what one does.

Yigal remembers that in his youth in the Haifa area he and everyone else would celebrate the day differently. It those days everyone was out in the streets milling around, then suddenly a few people would form a circle and spontaneously burst into song and dance (the hora, of course). That was long before people started ‘attacking’ one another with squeaky plastic hammer and foam spray.

As a new immigrant in the 1960s I remember enjoying the squeaky plastic hammer experience, though not the foam spray. After getting married and having small children our days of milling around in the streets were over, though we did manage to enjoy picnics in the garden with friends and relatives. Everyone brought their own food, and played games. We didn’t possess a barbecue.

Spending the concluding evening last night watching the Israel Prize ceremony gave me pause for thought, quite apart from my disgust at the censorship imposed by the Minister of Education in refusing to award the prize to a leading scientist because his political opinions were not in line with those of the government.

The Israel Prize is awarded for academic or social excellence, and serves as Israel’s attempt to provide its own version of the Nobel Prize. Sadly, I have never attended a Nobel Prize ceremony, but I have read about it, and I know it is a very stately and serious occasion. Just imagine, if the ceremony would be the occasion for a series of pop singers to pop up, sing and play at the tops of their voices a medley of songs of questionable taste (and certainly not my taste). But that was the overriding tone of the Israel Prize ceremony last night. The whole occasion left an impression of bad judgment and inferior standards.

The recent change in the way the classical music programme on the radio is presented is another sign of the times. Where in the past it was customary to broadcast an entire symphony or concerto with minimal presentation between the items, it now seems to have become de rigeur to play just one movement of a symphony or concerto, and then go on to something else. To make matters worse, certain broadcasters think that their musings and thoughts about music and life in general are of interest to the listening audience. FYI, they are not.

As the torrent of letters of complaint to the newspapers has shown, the audience of the classical music programme is outraged by the change in the approach, as well as by the inordinate amount of time devoted to pop and jazz, oriental music and composers no one has ever heard of.

All these developments reflect the general malaise of Israeli society in recent years, and they doubtless all stem from the political rot at the top. I know it’s a cliché to complain that the country is going to the dogs, but that is certainly the feeling among many people old enough to remember what the general atmosphere used to be. The main fear of my peers and myself is that it’s possible to decline further still.