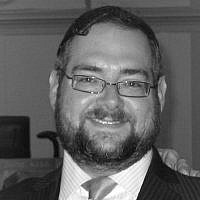 The Blogs
Benjamin G. Kelsen
Apply for a Blog
Advertisement
Please note that the posts on The Blogs are contributed by third parties. The opinions, facts and any media content in them are presented solely by the authors, and neither The Times of Israel nor its partners assume any responsibility for them. Please contact us in case of abuse. In case of abuse,
Report this post.

We have often heard that an election is “the election of our lifetime.” Never before, though, and not since the establishment of the United States in 1776, has the fate of democracy itself hung in the balance. Even in the elections of 1860 and 1864, when the question was would the North and the South remain as one nation or would there be two distinct countries, there was never any question as to whether democracy itself would survive. Sadly, that is not the case this year.

Currently, there are far too many candidates running for office who have stated openly, without any attempt to suggest otherwise, that they would have no compunction against overturning an election that did not go their way. Never before has the ideology of one of the two main political parties of this country been the overthrow of our Constitutional, democratically elected, government. Never have we seen at one time so many people seek public office only for personal power, people who bow at the altar of a false god, one that has shown themselves to be untrustworthy, dishonest, and without any moral or ethical grounding. The only driving directive for these people is maintaining personal power. This is not an election about economic policy, or States’ Rights versus Federalism, or Government versus individual rights. This election is about the danger, the precipice upon which our democracy now finds itself.

Perhaps the scariest part of all of this is the members of the Jewish community who would support those who would undermine democracy. This is difficult to understand as there are precedents in history from which everyone should have learned. The most recent example is not even 90 years in the past. At that time, in a country that was considered by many to be the most civilized and proper nation in the world, there was one individual who also did not receive the majority of votes from the population. This narcissistic megalomaniac still managed to have the will of the people subverted and have the results of the election negated. He converted a democracy into the worst fascist dictatorship seen in the history of the world. As we know all too well, that did not go well for our people.

How is it that anyone could forget the lessons of history and support candidates who align themselves with neo-Nazis and right-wing militia conspiracy theorists, with those who wish to assert power and the authority of the people for themselves? It is frightening that those who chant “never again” are so eager to hand over their freedom, liberty, and futures to those who wish them harm, to antisemites, racists, xenophobes, people who do not even bother to hide their hate any longer.

Now, for reasons beyond the scope of this essay, it is acceptable to voice whatever opinion one may have in the darkest recesses of their heart. Never in the history of this country have there been people in full tactical gear standing next to polling places, intimidating voters to keep them from exercising our most cherished freedom, the right to vote. Somehow, there are those who accept the sick and perverse notion that only by limiting freedom and the right to vote can our country remain strong. I recently had an opportunity to speak with someone supporting such a candidate. When I asked him why he was supporting this candidate he responded that the candidate will leave the yeshivas alone and he will come out strongly against antisemitism. When presented with facts and examples of the candidate’s own participation in the insurrection, attempts at undermining our democracy, and eager willingness to side with other insurrectionists and with antisemites who seek to harm his own people, this individual seemed surprised and claimed not to have known about any of this.

It is probably true. Some of our people are so disengaged from reality that they have become sheep, following the lead of those who would happily lead our people back to the days of the Holocaust. It is ironic because these community members claim that they never allow themselves to be duped. They are adamant that they will not allow themselves to be deceived by fast-talking confidence men. But now, when they see a blue sky, when they are told by the hatemongers that they are seeing an altogether different color, they reject their own observation and accept the perversion of truth being presented to them. No longer is 2+2 a simple mathematical formula. It is as if we are sitting with Alice in Wonderland at the Mad Hatter’s tea party.

If we allow our world to be turned upside down, by casting votes in this year’s elections for those who refuse to defend democracy, we will be endangering ourselves, our children, and all those still to come. All that the generations before us went through will have been for naught. All the freedoms that were fought for by our parents, grandparents, and all those who came before, those who struggled, bled, and died for the freedoms with which we have been blessed until now will have been for nothing. We must put aside partisan blinders and cast votes to ensure that democracy will continue to exist and to demonstrate that fear monitoring and hatemongering have no place in the public realm and that such people are not fit for public office.

This is indeed the election of our lifetime and we cannot afford to sit on the sidelines.

About the Author
Rabbi Benjamin G. Kelsen, Esq. is a rabbi and practicing attorney. He is active in Jewish communal issues as well as local and national politics.
Related Topics
Related Posts