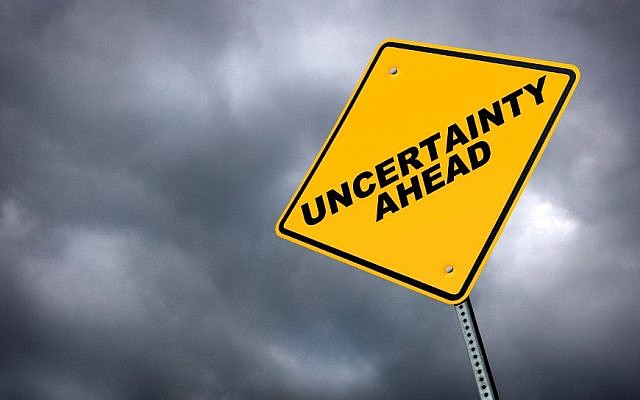 What does the end of 2018 mean to you? To me, it means that my 401K retirement plan is enjoying a roller coaster ride, it means that the US government is shut down with no end in sight, and it means that America is now planning to pull its troops out of Syria leaving an opening for Iran to expand its influence in the region and posing greater danger to Israel.  To me, the end of 2018 means a lot of uncertainty and uncertainty is something that we all have to deal with at different points in our lives.  It happens to be that at this point as Americans and as Jews who are loyal to the State of Israel we are living with a lot of uncertainty and the question that I’d like to explore is how do we cope with uncertainty. How do we cope with the fear of the unknown?

Some people cope with uncertainty by saying that everything will turn out all right.  I have faith in the stock market and in the Israel Defense Forces and sometimes this approach works.  However, what happens when we are dealing with a difficult personal situation – a medical issue, a financial issue, a fertility issue, an issue with shidduchim or shalom bayit, and it’s not turning out all right? There are countless stories of “and they lived happily ever after,” but what about the stories when they don’t live happily ever after?  What if this approach leads to utter and absolute disappointment?

Others may say that they know that what happens in the world reflects God’s will so they will accept it lovingly.  I just have one question for these people:  why, then, are many of them so nervous and anxious in times of uncertainty?  Maybe they have to ask themselves if they truly are accepting God’s will?

Perhaps the Ramban’s introduction to Sefer Shemot can provide some guidance.  He writes:

“The singularity of the Book of Shemot lies in its recounting of the first exile that was explicitly decreed, and of the redemption from it.  The exile is not completed until they return to their place and to the status of their ancestors.  Though they had left the land of Egypt and the house of bondage, they were still in a state of exile for they were in a land not theirs lost in the wilderness.  When they arrived at Mount Sinai and fashioned the Mishkan, then God returned and caused His presence to dwell among them.  Only then did the people return to their ancestors’ status … and they then were considered to be redeemed. Therefore, the Book of Shemot concludes with the matter of the Mishkan’s completion and with the account of God’s glory filling it entirely.”

For the Ramban, the book of Shemot is the book of galut and geula – exile and redemption.  What is redemption?  It’s a return אל מקומם ואל מעלת אבותם  – to their place and the status of their ancestors. I would think that that means Eretz Yisrael, where their ancestors lived, but that’s not what the Ramban says, because the book of Shemot does not conclude when we reach the promised land.  It concludes when we build the mishkan, when God’s Divine presence returns to the people.   According to the Ramban, then, redemption is not about a place or an event.  Redemption is a state of being.  It’s about living continuously in the presence of God.  Our ultimate destination is God Himself and that is our only certainty in a world of uncertainty.  We Jews have always preached the doctrine of uncertainty.  There is no people in the world that has existed as long and as dangerously in the world of uncertainty as has the people of Israel, and we persevere in this hazardous uncertain world knowing that God is our only certainty in this world of uncertainty.

But what does it mean to know that God is with us in a way that can allow us to conquer our uncertainty?  Rav Yaakov Yisrael Kanievsky, known as the Steipler, distinguished between two different types of emunah – two different types of faith – emunah sichlit, intellectual faith, and emunah chushit – sensual faith.  Emunah sichlit is an intellectual faith and knowledge of truth, but emunah chushit is a higher level.  It entails thoroughly hammering home this intellectual knowledge so that it enters my consciousness and I internalize it and I literally feel it and sense it.  Every day we say Alenu and every day in Alenu we say וידעת היום והשבות אל לבבך – and you will know today and you will place in your heart – כי ה׳ הוא האלוקים  – that Hashem is God.  To know that Hashem is God is emunah sichlit, but to place it in our heart, to recognize as the Ramban did that real redemption is about living continuously in the presence of God, is emunah chushit.

But here’s the thing about emunah chushit.  It requires a lifetime of work that is never-ending.  It’s more than intellectual proofs that God exists.  It’s about transforming our religious experiences into spiritual encounters with God.  It’s about praying with a sense of connectedness, it’s about studying Torah with a sense of connectedness and it’s about performing mitzvot with a sense of connectedness, again and again and again.  As we finish 2018 living in uncertain times with a volatile stock market, a government shutdown and a potentially scary situation north of the Israeli border, and as some of us contemplate uncertainty in our own lives, let us choose to create emunah experiences in our lives and maximize those experiences.  At the end of the day, as Rabbi Jonathan Sacks points out, faith is not certainty, but faith is the courage to live with uncertainty.