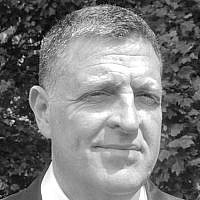 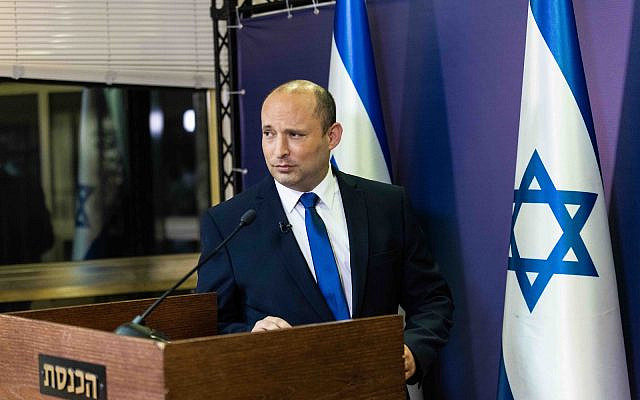 Head of the Yamina party Naftali Bennett gives a press conference at the Knesset, the Israeli parliament in Jerusalem, on May 30, 2021. (Yonatan Sindel/Flash90)

Since regaining independence more than 70 years ago, Israel’s strongest strategic asset has been the fact that it is the only true democracy in the Middle East. A small state, surrounded by enemies, defended by a mighty military, a free-market economy driven by cutting-edge technological innovations, balanced by an unwritten constitution, upheld by the rule of law, separation of powers and a once highly respected Supreme Court.

Israel’s democracy demonstrated common values and a strong partnership with the United States and other leading democracies while serving as a stronghold of freedom in a region of tyranny. That strategic asset will be lost should the Knesset appoint a person who enjoys the support of less than 5% of the voters to be Israel’s next prime minister.

No prime minister in Israel has ever entered office with less than 26 seats in the Knesset (less than a quarter of the 120 seats in parliament). The one with 26 (Ehud Barak) lasted a year and a half in office and is considered to have been a colossal failure. Now, for the first time in Israel’s history, the mandate to form a government is in the hands of someone with 17 seats (Lapid), who in turn is offering to appoint a prime minister with six mandates (Bennett). That is, a prime minister, who barely received 280,000 votes, most of whom regret it already. Not so long ago, such a scenario would be difficult to fathom.

Appointing a prime minister with six mandates – one-fifth the size of Netanyahu’s party – will go down as the most anti-democratic political ploy ever carried out in Israel – perhaps in any democracy. It will be the first time in the history of democracies that someone with less than 5% voter support is sworn into office. This six-mandate stunt is being trumpeted by mainstream media, which, in doing so, is cutting off the third leg of democracy. The same media that warned about Israel’s unstable democracy under Netanyahu, is now showing that hypocrisy has no limits.

The political ploy will probably end shortly after Netanyahu’s tenure ends and will be followed by yet another round of elections. The damage, however, to Israel’s democracy may be irreversible.

Bennett sees the unpleasant polls every morning, sometimes twice a day. But he is convinced that once he holds the prime minister post, his standing will strengthen.

The closer Bennett comes to forming a government, the more he distances himself from the legitimacy he yearns for. Despite his pleas, the Left will never accept him, and the Right will never forgive him. He will be considered the Bennedict Arnold of Israeli politics, even if he signs multiple peace agreements.

Politicians lie. That is a fact of life, much like death and taxes. Noteworthy examples include FDR telling American voters in 1940 that, “Your boys are not going to be sent into any foreign wars” shortly before sending them to the Pacific. In 1988, George H.W. Bush said: “Read my lips, no new taxes,” shortly before raising taxes. In January 1998, President Clinton denied having had any sexual relations with Monica Lewinsky. An investigation into whether he had lied under oath provided graphic evidence of their escapades in the oval office that proved to the contrary. In August 1998, Clinton told a close friend: “The lie saved me”.

Israeli politicians are no different. Begin said he would never withdraw from Sinai shortly before doing so and Rabin promised never to negotiate with the PLO or permit a Palestinian state, shortly before signing the horrific Oslo Accords.

But Bennett’s campaign lies are of an altogether different scale and weight. Not only because he categorically pledged on the eve of the elections that he would not, under any circumstances, form a government with Lapid or with ultra-left-wing and anti-Zionist parties and is now doing so, but mainly because his political treacheries now jeopardize Israel’s democracy and possibly its existence as we know it. In a misleading moment of ostensible candor prior to the elections, Bennett vehemently proclaimed that a candidate with ten mandates cannot be prime minister. “That is not Democracy” he rebuked. As in Clinton’s case, Bennett’s lie, “saved him” from falling below the electoral threshold for a second time. It will not save him from doing so the next time.

About the Author
Dr. Falk is the author of Targeted Killings, Law and Counter-Terrorism Effectiveness, is a research fellow at the International Counterterrorism Institute (ICT), was a visiting scholar at Georgetown University and is a founder of Acumen Risk Ltd.
Related Topics
Related Posts
Comments