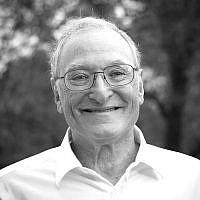 The Blogs
Loel Weiss
Apply for a Blog
Please note that the posts on The Blogs are contributed by third parties. The opinions, facts and any media content in them are presented solely by the authors, and neither The Times of Israel nor its partners assume any responsibility for them. Please contact us in case of abuse. In case of abuse,
Report this post.

After the destruction of the First Temple in Jerusalem in 586 BCE, many Israelites were exiled to Babylonia.  Up until the Temple’s destruction, Jews worshipped God through an elaborate system of animal sacrifices controlled and performed by the Kohanim, a priestly class descended from Aaron, Moses’ brother.  Most Jews accepted that the only legitimate place to perform the sacrificial rituals was in the Temple in Jerusalem.

Unable to continue worshipping God through animal sacrifice, the exiled Israelites/Jews developed a system of worship: prayer, ritual and study, to replace the sacrificial worship.  Israeli philosopher and Biblical scholar Yehezkel Kaufman said, “with the exile, the religion of Israel comes to an end and Judaism begins.”  Approximately 70 years later, many of these exiles were allowed to return to Israel where they quickly set about to rebuild the Temple and reinstitute animal sacrifice.  As far as is known, the Jews who remained in Babylon continued to worship, using ritual, prayer and study.

When the Second Temple was destroyed in 70 CE, animal sacrifice was destroyed with it, but although Jerusalem was destroyed, Rabban Yochanan ben Zakkai founded an Academy in Yavne that became the center of Jewish religious life.   The Academy gathered the religious leadership of Israel to decide how to deal with the loss of the sacrificial system of the Temple in Jerusalem and other pertinent questions.  The Academy created a system of prayer, ritual and study, which replaced animal sacrifices.  Eventually Rabbinic Judaism emerged from these deliberations.

Following codification of Rabbinic Judaism’s central texts; the Mishnah (@200 CE) and the Gemara (@500 CE), Judaism developed a fully functioning system of prayer, ritual and study.  Jewish communities throughout the world grappled with how to apply these texts to their specific geographical and sociological situations.  And while communication between Jewish communities was sporadic, there was acceptance that each community was creating a variation of a legitimate Jewish method of worship.  The most basic understanding of this ‘Jewish method’ was that God commanded us to follow 613 Mitzvot (obligations) and we learned what these Mitzvot were through study; that is the proper interpretation of the Torah and Talmud as taught by the Rabbis of each generation.

With a few notable exceptions (i.e. Spinoza), Rabbinic Judaism worked well into the mid nineteenth century as the system of maintaining Jewish community and continuity.

By the late eighteenth century, the Enlightenment had begun to reach Jewish communities in Western Europe and from there, spread to Eastern Europe and Russia.  The consequences of the Enlightenment were a lessening of a reliance on revelation and tradition and more of a belief that individuals had the right to rely on their own knowledge and logic to decide how to live their lives.

From a Jewish perspective, this weakened the community’s hold on the individual and especially weakened the hold of the rabbis over their communities.

The Enlightenment influenced Judaism in other ways.  Jews began to create ways of expressing their Jewishness outside of Rabbinic Jewish norms.  The Haskalah, or Jewish Enlightenment strove to integrate Jews into the communities where they lived through the study of secular knowledge.  It encouraged Jews to adopt modern values, culture and appearance.  The Haskalah promoted individual rationalism, liberalism, freedom of thought and inquiry.

The Haskalah challenged the notion that how we observe Judaism is based on a revealed tradition.  It claimed that each individual has the ability to decide what Judaism means to them based on their own logic.  And by the late nineteenth and early twentieth century, Jews in Europe and the United States were deciding for themselves whether to continue to follow traditional Rabbinic Judaism, a more liberal interpretation of Rabbinic Judaism, or express their Jewishness in some other form or even become secular; that is living a life with nothing discernably Jewish about it.

Zionism, or Jewish nationalism was another Jewish response to the Enlightenment.  It’s goal, was to create a Jewish nation-state in Palestine.  Like the Haskalah, Zionism was a direct challenge to Rabbinic Judaism as Rabbinic Judaism taught that a return to Jewish sovereignty in Israel would only be brought about with the coming of the Messiah.

Looking back, one can see that both the Reform and Conservative Religious Movements that began to form in the mid nineteenth century, were an attempt to package tradition and community in a way that those influenced by the Enlightenment could accept.  Both movements saw Rabbinic Judaism as the essence of Judaism.  Both movements attempted to modernize Rabbinic Judaism and for over 100 years, both movements provided a serious choice for Jews who understood that Judaism meant Rabbinic Judaism but who wanted a more liberal understanding of what Halacha (Jewish/rabbinic law) was.  In fact, both movements ultimately co-opted parts of Haskalah and Zionistic practices and learned to live side by side with those Jews who chose to remain outside the framework of Rabbinic Judaism.

For example, by the 1950s, many synagogues in the United States were hosting ‘bagels and lox’ breakfasts, art and cooking classes, Jewish Book Clubs, boy/girl scout troops and other Jewishy activities, in addition to the traditional functions of a synagogue:  religious services and classes.

In the early twentieth century, Rabbi Mordecai Kaplan suggested another way to bridge the gap between Rabbinic Judaism and non-rabbinic Jewishness when he created the concept of Judaism as Jewish civilization.  No more would Mitzvot be seen as obligations that God demanded of us, as understood through study of revealed texts, rather these religious practices were ‘folkways’ of a civilization, not so different from the American traditions of saluting the flag or playing the national anthem at sporting events; things we do, not necessarily because we believe in them or that they hold intrinsic meaning for us, but rather because that’s what members of the American civilization.  So too, keeping Kosher, observing a Saturday day of rest and the celebration of Jewish holidays, were the folkways of the Jewish civilization.  Kaplan’s philosophy has been incorporated into Conservative and Reform Rabbinic Judaism, to synthesize the rational and logical with traditional ways of observing Judaism.

Although Orthodox Judaism lost members to both the non-rabbinic and the liberal rabbinic forms of Judaism, it felt confident enough in the rightness and righteousness of its position, not to move outside of the confines of worship and study that had sustained it for nineteen hundred years.

But despite all the attempts by Conservative, Reform and Orthodox, by the end of the twentieth century, the pendulum had clearly swung in the direction of non-Rabbinic Judaism.  And certainly, in the United States, synagogue membership as a percentage of the total Jewish population, has steadily gone down.

In 2000, the sociologist Robert Putnam noted the loss in membership in all civic organizations.  People no longer came together, whether for fun (bowling), communal support (Rotary, Lions Clubs) or religion (synagogues).  When we combine this with the fact that many, if not a majority of Jews in the world no longer believe that there is even such a concept as Jewish folkways, let alone an acceptance that Mitzvot are obligations from God, we can see that Rabbinic Judaism’s hold on most Jews has come to an end.[1]

Rather for the majority of Jews, being Jews means picking and choosing from ancient traditions, neo Hasidic traditions and modern creations.  Choosing, not even based on any philosophy or logic, but rather choosing what feels good to them at any particular moment.  Rabbinic teachings mean little to them.  Jewish, is anything they want to call Jewish.[2]

It seems to me that we are now on the path of creating two, separate and distinct systems of Judaism.  A small cadre of Jews who continue to follow Rabbinic Judaism.  These will include Orthodox Jews as well as some Conservative and Reform Jews for whom tradition, ritual, prayer and study, defines their Judaism.  And many Jews who define themselves as Jewish because they choose to call themselves Jewish.

There have been times, in the past, where Jews with divergent views on how to define Judaism have co-existed with each other.  The Talmud records that even though they understood Judaism in very different ways, the adherents of the school of Hillel did not refrain from marrying the adherents of the school of Shammai.  But there have also been times throughout our history when this was not the case.  Many rabbinic authorities view Karaite Jews as not Jewish at all, and forbid marriage between a Rabbinic Jew and a Karaite Jew.

As a Conservative Rabbi who believes that God has commanded us to follow the Mitzvot, I cannot help but feel sorry and scared that the loss of so many Jews from Rabbinic Judaism will, in one or two generations, cause the descendants of these Jews to be lost to Judaism completely and the Rabbinic Jews who remain will have trouble supporting the institutions (Synagogues, Mikvaot, Kosher establishments, mates) to sustain the system.  Already, many rabbis, before they will officiate at a wedding ceremony, are insisting on documents (Ketubot, etc.) proving that both parties are Jewish from a traditional, rabbinic perspective (Jewish mother/grandmother or properly converted to Judaism).  It is no longer sufficient to rely on the claim by a bride or groom that they are, in fact, Jewish.

On the other hand, I wonder what the Kohanim who survived the destruction of the Temple in 70 CE thought when they saw Rabban Yochanan ben Zakkai move the center of Judaism to Yavne and replace animal sacrifice with worship, ritual and study?  I wonder if they too felt that Judaism was finished.

We are a miraculous people.  I pray that we continue to be.

[1] Although statistics are hard to come by, it seems that in the United States, over half of those who describe themselves as Jewish, do not belong to any organized religious movement.  In Israel, slightly more than half of Jews, identified with a religious stream (Haredi, Dati, Masorti, Reformi).  But contrary to popular belief, that number is dropping.  https://www.haaretz.com/israel-news/.premium-bucking-trend-israeli-jews-becoming-less-religious-new-study-shows-1.6095436?=&ts=_1582722758979

[1] One, of what could be many examples, was a congregant who wanted me to create a Jewish ceremony to name his grandson. When I remarked that the naming was done at the Bris-ritual circumcision, he informed me that the baby was not being circumcised. When I tried to explain to him the importance of this ritual he got impatient, telling me that it had no meaning for his daughter who was married to a non-Jew who was not circumcised and that they wanted the baby to look like his father. And then the grandfather added: ‘if you really want Rabbi, we can pour some Ketchup on the baby’s penis so it will look like blood”.

About the Author
Loel Weiss was ordained at JTS, 1975. He is rabbi emeritus of B'nai Tikvah in Canton, MA. A member of the CJLS for 10 years, he wrote Teshuvot on the Burial of non-Jews in Jewish Cemeteries and the Kashering of Dishwashers. He also contributed a chapter on sexual abuse by clergy in "Tempest in the Temple" edited by Amy Neustein and published by Brandeis U. press. Rabbi Weiss is a retired Navy Chaplain.
Comments