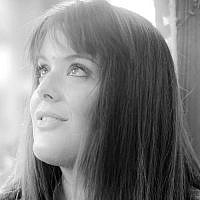 The Blogs
Sharonna Karni Cohen
Apply for a Blog
Please note that the posts on The Blogs are contributed by third parties. The opinions, facts and any media content in them are presented solely by the authors, and neither The Times of Israel nor its partners assume any responsibility for them. Please contact us in case of abuse. In case of abuse,
Report this post. 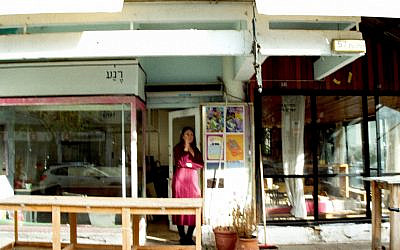 For four years, Rega Salon was a place for political debates, poetry readings, exhibitions, delicious food and coffee — and was the continuation of the infamous Cafe Tamar. It closed earlier this year, alongside the famous cafes of Mersand, Bialik and Sheleg. The building was demolished this week. Sharonna, one of the co-founders reflects on the timely coincidence of the end of one establishment and the beginning of a new government. Especially since when she entered the space, there were campaign posters of Bougie Herzog while the song lyrics of Yair Lapid about Cafe Tamar played in the background:

Shenkin Street. In some ways a timeless street. Known by the entire country. Where it meets Ahad Aham was once Cafe Tamar and today, a never-ending moment. A cultural hub in Tel Aviv, “she lives in Shenkin, she sips her drink in Cafe Tamar.” The famous song lyrics of Yair Lapid.

I remember the first time I entered Cafe Tamar with my friend Itay. The original bohemian scene of Tel Aviv. It was equally intimidating and magical. A Friday afternoon with endless cups of short, long, black, mud, milky coffees; sipped by each of the philosophers sitting there. 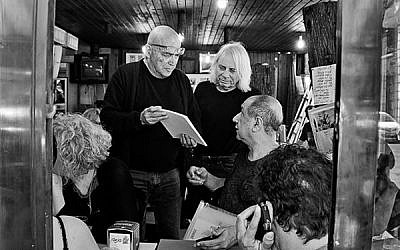 I fell in love with the atmosphere. It is actually symbolic in some ways of our country. It is not so much about the exterior or the appearance and rather the humans that live here, a true sense of coziness and community in the heart of the city. The feeling of being together; one table to another or catching the eyes of a stranger and embracing this moment. Whatever it is in that moment of time.

I never thought I would be a cafe owner, but I had a vision and a purpose to create a space that holds so much historical and cultural significance. The owners were generous reciprocators to our dream and with the support of eighty founders, we received the keys and started dusting. 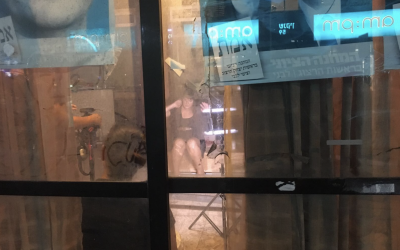 In the midst of preparing and painting, the actress Galia Ishai (Rest In Peace) walked in with her powerful and intriguing husky voice. She had years of experience in the Tel Avivian cafe scene. She urgently asked with a concerned voice… Is this going to change? What are you doing? This is Cafe Tamar. She wasn’t the first and wasn’t the last over this month of cleaning and organizing. Each person who used to sit in Cafe Tamar would ask this exact question. They were ensuring the essence wouldn’t go away.

In the past there had been trees of Tamar (Palm) in the middle of the cafe. A neighbor claims money was hidden below the tree trunks. We never knew if anyone found the money. Maybe Sara, the inspiring owner of Cafe Tamar, had a secret story. Until today there is graffiti on the bathroom wall “Sara, you are missing.”
A personality can truly envelop a place for 60 years.

I had stepped into the shoes of a deep soul. There are memories of at least three generations that override the physical space. It is these moments that truly count and create this nostalgic culture that sometimes we are scared to dive into or face it. I felt I was entering a historical book of Tel Aviv.

If not for romantic nostalgia, what else are we holding onto?


Of course, our brain is puzzled in a way to plan one step ahead. Yet, this is what Rega reminds us; to embrace the moment and let go. 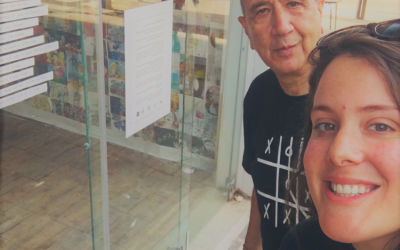 Ronny Someck & I before closing Photograph by Sharonna Karni Cohen

The poet Ronny Someck told me a few days before we closed the doors to Rega that the essence of a city’s DNA can be found in the cafes. Each unique and neighborhood orientated with so many layers and personalities.

Every Friday, I knew I would see the artist David Tartakover, who created many of Rabin’s campaigns, sitting at his table, with his round and creative glasses, reading the paper or illustrating scenes and nature of Tel Aviv in one of his many books filled with artworks. Rutti Rappaport and her husband, Azarya, an incredible actor, had sat here for years. They would come to read the papers and talk to their friends from the neighborhood. Until the last day of Rega, she and Aliza, a respectable writer from Davar would sit here every day. They join the Friday Parliament including Radio Journalist Eran Sebag, Scholar David Sorotzkin and many more.

Social acts are charged with the revolutionaries and their beans of coffee. Ones that continue beyond the physical space. Five couples madly in love amongst the flirty candles, a baby born from a couple that met at Rega, multiple businesses generated and flourishing, university essays, articles, movie scripts, countless chess games. Hours of passionate conversations.

No matter how technological our worlds will become, the cafe culture will always exist. In moments of solitude we seek for these public spaces to come together. 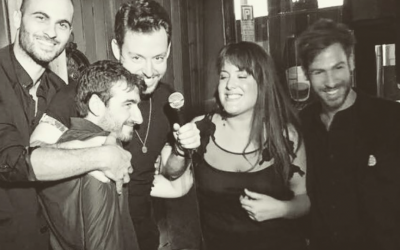 I feel sadness and a lot of love with this demolition. I also feel satisfaction and catharsis. While we felt like a crazy bohemian rock band, we knew from day one that this wasn’t forever or going to be easy. We also didn’t exactly end up as the same family that started it. Like any cliche of a band or partnership.

Sometimes we want a ceremonious closure for something that has ended in our lives; a relationship, a business, a friendship. It makes sense. To remember. To understand. To feel. The spirit will never go away.

Rega in Hebrew or a moment is a time with no measurement.

For me it was a place to fall in love twice, to welcome heartbreak twice, to say goodbye to heartache, a place with lessons, conversations, some endless, a family, a friend, a best friend, a birthday, many birthdays, a holiday, an expression, an enlightenment, a betrayal, another betrayal, a portal of justice, a wondrous journey into the unknown, theft, a few thefts, a first for debts, a look into overdrafts, an experience, a window, a door, a brain, a heart. Electricity, milk, water, vegetables, salaries. Endless excels.

Most importantly, Rega is a thank you to the people, stories and moments.

To my fellow creators and entrepreneurs of restaurants and cafes around the city. I pull off my hat to each of you.

And to you dear thespians, coffee drinkers, revolutionaries, writers, filmmakers, and storytellers. Thank you for your presence and support over the final years at this corner.

I will never forget a busy Rega Friday, a man shouted to us from his car, “Lefties, go home”. I turned to my friends around me and said, “but we are home”.

It is beautifully fitting that on the same week the building is finally demolished, we are transitioning into a new government. The moment has arrived. Hello to change. 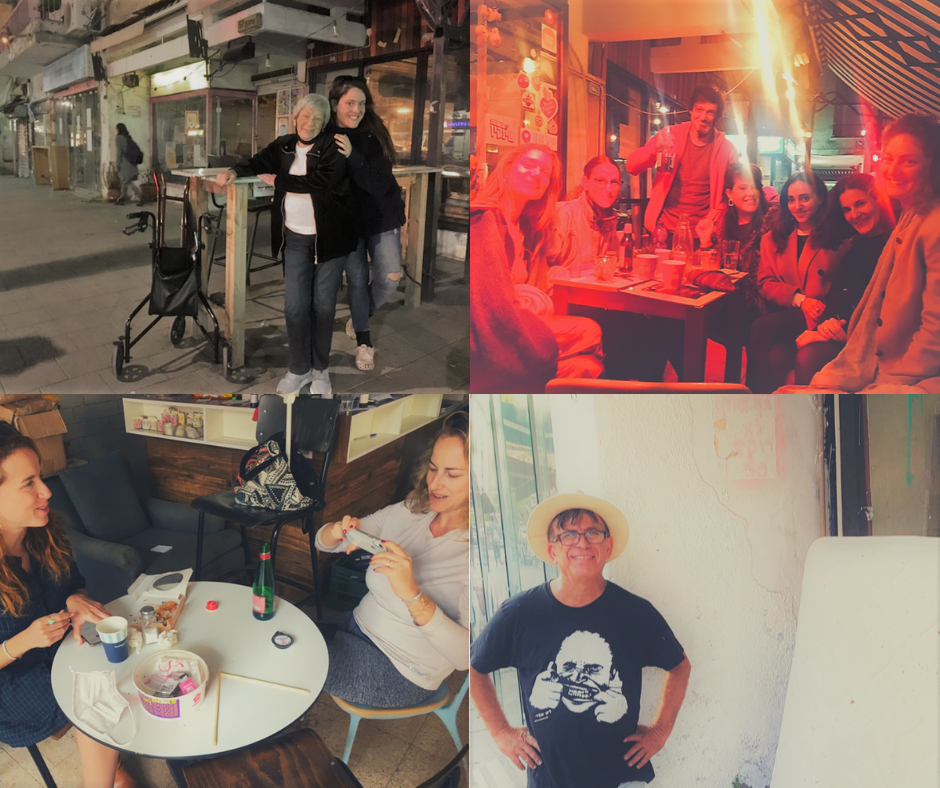 Photograph by Michael Shuval A few from many that became friends for life in Rega.
Ruth Rappaport, Dan Ariely, Stav Shafir, Shirlee Klein and Rami Meiri 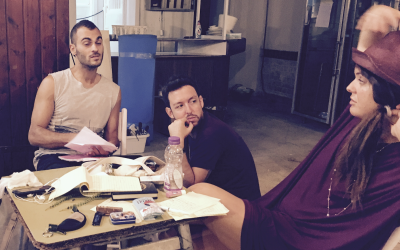 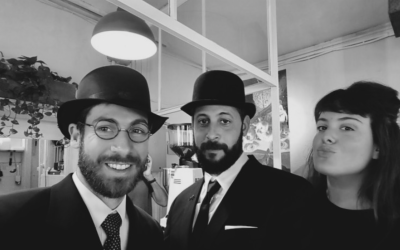 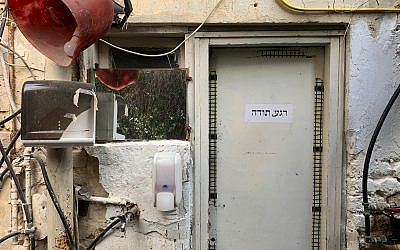 Photograph by Lotte Beilin
About the Author
Sharonna is a dreamer and co-creator. She is the founder of Dreame; a global collective of artists turning the imagination into art. Dreamers are invited to send a memory, story, vision, dream or imaginative thought on dreame.me. The words are then turned into customised artworks; printed on yoga mats, framed prints and phone cases. Dreame also created The Big Dream; large art installations puzzled out of yoga mats in Kikar Rabin and Gai Bin Hinom in Jerusalem so far envisioning the future. She is the co-founder of Rega Salon; a jazz, art and vegetarian pop up space on Shenkin 57. Sharonna is an advocate of disconnecting, diving into our subconscious and dreaming every day.
Related Topics
Related Posts
Comments