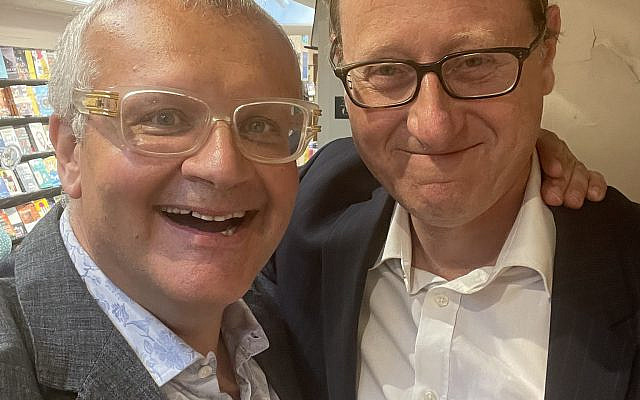 Only four Jewish prisoners ever engineered their own escape from the vicious SS guards, their ferocious dogs, rows of tall electrified fences and men on watchtowers wielding automatic weapons in Auschwitz-Birkenau.

But Walter Rosenberg, just 19-years-old, used knowledge, cunning and patience to do what no Jew had done before. He and Alfred Wetzler, then aged 25, broke out of Auschwitz and successfully made their way to freedom.

But Walter, later to become Rudolf Vrba, hasn’t been legendized like others who emerged from what became known as the Holocaust. Until now.

Because his audacious breakout with Fred saved the lives of 200,000 Jews, mostly from Budapest.

They revealed Europe’s depraved undertaking to destroy its Jews and warn those yet to be uprooted, Hungary’s Jews of their inevitable destruction – if they got on trains bound for “new lives in the east” as they were told.

Even if those in power had known about the mass extermination of the Jews for sometime, their vivid Auschwitz report attracted mass media and exerted political pressure on the White House, Downing Street, the Vatican and critically in Budapest, where the Regent of Hungary, Miklos Holthy had turned a blind eye to the mass deportation of his Jewish citizens to Auschwitz in the summer of 1944.

And Rudi had something else which marked him out, being young and fit was one thing, but he also had an extraordinary capacity for memory: counting and record keeping in his head.

It enabled him to write a comprehensive 32-page report with Fred to reveal precisely the hell they’d come from.

The mass media was alerted and it ended up in the hands of Churchill, Roosevelt and the Pope.

This was a very special interview as I’ve been friends with bestselling author Jonny Freedland for 40 years and we talk about our friendship too. We’ve laughed together, mourned together and prayed together.

I wanted our podcast discussion to be different from the book, to raise ideas and questions which came from it rather than repeat the text because there’s been a lot about the book on radio and social media.

And of course, there’s a lot to our friendship after all these years. We also talked about our dear late fathers, the first postwar generation to establish themselves in a wider cultural and economic sense in Britain.

As Jonny said to me, they paved the way for us to pursue our lives.

But there was something else too. Whenever I am confronted with a Holocaust story, I go back to my own family’s experience. I have first hand recollection of suffering and ultimately expulsion from Nazi Vienna to Birmingham as told to me by my own my own grandma, Olga Posaner. I took the opportunity to include the voice of in this episode.

Her story was never hidden from me. I was even confronted with an Auschwitz tattoo on a great aunt’s forearm when I was about six years old. My grandma was determined I shouldn’t see it. But to me, the enormity of her reaction compared to what looked like biro made me show willing to find out more.

The reaction from this episode has been very personal. As well as ratings and reviews left on Apple podcasts, I’ve had emails and texts from close friends I speak to regularly and even an old flame from 25 years ago who had the privilege of meeting my grandma all those years ago.

It’s an extraordinary feeling to build community around individual stories, but this is what’s happening with every episode. I’m so grateful for the opportunity.

Subscribe and listen now to Jonny Gould’s Jewish State by following this link.

About the Author
Following a 30-year career in broadcast journalism, Jonny Gould’s now a prolific podcaster, fast emerging as Anglo-Jewry’s go-to-interviewer. As a news commentator at Sky News and BBC Radio, Jonny frequently raised concerns on what he saw as the new threat from the hard-left led by the British Labour Party. From 2016, he earned a reputation for outspoken views rarely voiced on UK TV. In response to the unchecked and sudden rise of antisemitism Jonny Gould’s Jewish State was launched. The podcast serves as an archive and library of one of the west’s oldest Jewish communities and is a window into the dynamic of the day for world Jewry. Jonny is now also a presenter at TalkTV.
Related Topics
Related Posts