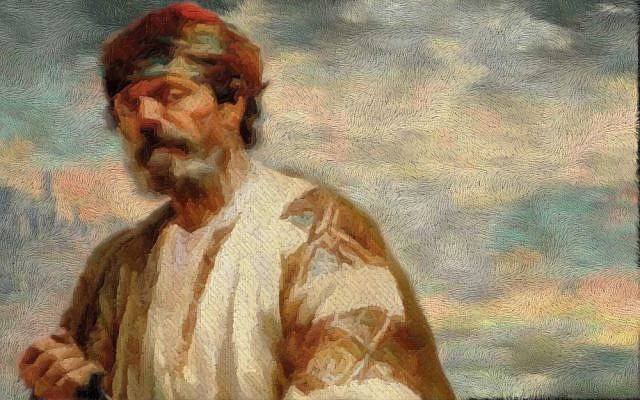 Sheikh Rashid; image colorized and modified by the author, obtained from Wikimedia Commons, Bandolero by Alfredo Puelma, in the public domain.

In this episode it seems Batkol could read real good, because…

…As they drag her away I blurt out,
“Sheikh, she reads as good as me, and she bound those books, the ones I wrote. Test her right here. Show ‘em, Batkol.”

Some days later, rested, well-fed…
“The Sheikh deigns to meet you’s now.”
For the first time we leave our windowless cell and, barefoot, plod thru narrow halls, glimpsin’ views thru the arrow slits. We’re high on a cliff overlookin’ a plain.

Up coilin’ stairs we climb our way to a room bathed in pools of light. The view, three hundred and sixty degrees over ridges and mountains that crumble and crash into rugged wastes, hamlets and fields. And what a throne-room the sheikh commands. Thick pile rugs, soft cushions with blazin’ zigzags and floral designs, like a field of poppies, tulips, roses. A conical ceiling, cedar, inlaid with exotic wood and precious stone, chevrons and wave forms and interlockin’ knots. And the wall, waist high in alabaster tile, then onyx columns and onyx arches, like the roof almost floats above our head.

“Tell me, Saadia, and be succinct, how have your people managed to thrive without a country, without a king, without a Mahdi or Messiah dream? Rather, the hostile ruler and law is become your milk and your honeycomb.”

“Honorable Sheikh, who can presume to know how these worlds will enfold and unfold? But our sages teach, and us faithful believe the Lor is a fortress and He defends. And the more that compassion guides our feet the more God’s fire tempers our souls. And let me say, but who can know, when ‘a hard wind blows and the winnower throws, his chaff scatters but his seed pile grows.’”

“Proverbs are fluff for priests and imams. It’s just as likely a hard wind blows and seed and chaff both scatter away. Or a hard rain falls and all is lost. Don’t go mistaking the weather for God. I want to know the source of your strength. I say, gather men and swords, conquer land, build a redoubt, and claim your place, strong and proud. Don’t you think that’s the way to survive?”

“Yeah, that’s a way some people do it. I’m thinkin’ here of Babylon and Rome. I’m thinkin’ also of Philistine and Greece. Built their towers thick and tall; spied the neighborin’ lands with greed; made themselves a machine of war; threw their gauntlets, shook their swords; stomped their selves right into dust. But Sheikh, what makes a nation great? Bloody swords or holy words? Burnt out fields or learned souls? What makes roots that they endure? Enrich the soil and not the king. Then when drought and locust come to strip the branch of fruit and leaf, yet the roots may still renew.”

“Your eye is sharp to pick and choose exemplars that will prove your point. But many nations yet survive from Ancient Days, onslaughtin’ us — Persia, Egypt, distant India, Arabia, Ethiopia. They rose and fell and rose again. Land it was that made them strong. Without land, who survives? None it seems, except you Jews. Now here us Ismailis gasp* among these rocks, our last redoubt, less a Muslim than a Jew.”
* others say: grasp

“I disagree, my dear Sheikh. Much more a Muslim than a Jew. Still you hope to tower tall, a mighty oak, and hard as rock. A Jew is more a prickly bush producin’ berries all can pick; or like a well-trimmed orange tree with fruit that hangs all year long, and as it hangs it gets sweeter. Not by force and not by fears, but addin’ virtue, teachin’ skills, bringin’ knowledge, buildin’ souls. That be how the Jew survives. Where kings let us live in peace we add great value to the land. You make weapons. We’ll make schools. We make tomes, not moldy tombs.”

There he sits and looks at me and shakes his head with narrowed eye, maybe thinkin’ all the ways to cut my veins and flappy tongue or sear my eyes and lop my feet. Or maybe he’ll just throw me off the tower’s edge, and let the crows relieve the need to bury me. Or maybe he’s recallin’ lines in holy books to counter me, war of words, not of arms, Koran combatin’ Torah verse, Muhammad and Moshe nose to nose…

“Yes. That voice persists in me tho all my mind is rejecting it. I see your people, not like Rome nor like Persia, nor any else. Not like the way Islam proceeds. And tho my heart is like to curse you Jews, that Voice yet insists your ways are worthiest of all. And tho my mind shouts ‘blasphemy’ perhaps the Prophet’s secret truth is to teach your Torah thru Islam.”

Stunned, I sit. My face all scrunched. Did I hear his words a-right? Or is he sittin’ like a cat that bats a mouse between his claws? Tentative, I venture this:
“Don’t the Prophet make it clear Islam must be the end of us? Pagan, Christian, Hindu, Jew — the war of swords, the war of souls has no end til all convert?”

“Our judges read Koran that way, but judges mostly serve their king lookin’ for a sure reward, and so they say the Caliphs know the Prophet’s heart and Allah’s truth. But I have known more than one Caliph, and they are merely men. And them that serve them, lesser men. One says the Prophet teaches peace; then says that means we must conquer all. Here a Sura praises Jews. Another Sura curses you. Does the Prophet contradict himself, or is the error in our holy scribes who wrote the Prophet’s visions down, or in the limits of our mind? This I know — my enemies would cut my tongue out if they could. Frank and Jew — I don’t fear these. My Muslim brothers — these I fear.”

“But tell me Sheikh, why does this land live in fear of one such as you?”
I can’t tell if the look on his face is a burdened smile or a frown or a sneer.

“Like you who listen to the words of the Lor to hear directly, and not accept the popular sayings and dictated ways enforced by promises, threats and the whip, we Ismailis have found a way on a new branch of the Muslim stream. We experience the Qiyamah* time and set our course on that higher way. Just like you Jews, the law of the land, the Caliph’s mouth, the princes’ mouths, mufti, imam, and qadis’ mouths all declare our ways are sinful, and damn our beliefs with cruel intent.
* in which the Mahdi has come, superceding Islamic law

“And this is why I am asking you how the exiled Jew survives so well.”

And so I talks for many a day with Sheikh Rashid ad din Sinon, known as the Old Man of the Mountain. Him, wise and subtle and kind, and yet a warrior when the hour calls. Now his name is embedded in the land, the Assassin Sheikh sowin’ fear from Masyaf castle, his high redoubt. A thousand allusions, daggers and hashish, terror and stealth in his holy name.

And then I thinks: here, this one who captured us and tortured us to know our thoughts… I hated him and prayed the Lor would cast him down along with all the wicked ones. Yet this very one is a righteous man, pious and praisin’ of Yisroyel. May such a one walk beside us forever and be rewarded here and in time to come.

*In the higher dimensions beyond these domains, twelve and thirteen are one and the same.* Who can know how the Lor computes?
*-* since these 2 blessings in the Shmonah Esray are merged in this man and his world.

In the next episode… children, turn your eyes away.

About the Author
I am a writer, educator, artist, and artisan. My poetry is devoted to composing long narrative poems that explore the clash between the real and the ideal, in the lives of historical figures and people I have known. Some of the titles of my books are: The Song uv Elmallahz Kumming A Pilgimmage tu Jerusalem The Pardaes Dokkumen The Atternen Juez Talen You can listen to podcasts of my Eternal Jew posts on my personal blog, Textures and Shadows, which can be found on my website, or directly, at: http://steveberer.com/work-in-progress. I live with my bashert just outside Washington, DC, and have two remarkable sons, the three of whom light my life.
Related Topics
Related Posts
Stephen Berer