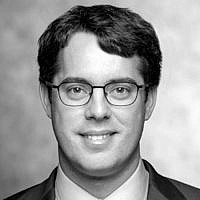 The Blogs
Ben Zion Ferziger
Apply for a Blog
Please note that the posts on The Blogs are contributed by third parties. The opinions, facts and any media content in them are presented solely by the authors, and neither The Times of Israel nor its partners assume any responsibility for them. Please contact us in case of abuse. In case of abuse,
Report this post.

Hatikvah, the Israeli national anthem, and The New Colossus, the quintessential Jewish American sonnet, are more than just words. For Israeli and American Jews, they are symbols, perhaps even liturgy; lofty expressions of each community’s deepest aspirations for its home country. Side by side, they sketch alternate visions for modern Jewish existence: either as a proactive minority in a multicultural society, or at the helm of a Jewish state that is a light to the nations.

Reality, inevitably, does not live up to such lofty aspirations. American immigration and welfare policies often fail The New Colossus’s open-armed welcome to the world’s – and even to America’s own – poor, huddled masses. Hatikvah’s simplistic faith in the boundless power of the “Jewish soul” offers little guidance for navigating the moral ambiguities of Jewish sovereignty and the toll it takes on others. The epic poems prophesy of promised lands and freedom for all; we, living in their shadows, scramble to piece together a reality worthy of their grand visions.

In the past few years, my own reality has also diverged from Hatikvah’s straight-and-narrow path. In early 2018, my wife and I moved from Tel Aviv to New York, where she’s from. For me this was a difficult transition. I’m a sabra, the son of American olim; I never expected to live in America. At times I’ve felt like a Hatikvah Jew living an uncanny New Colossus life.

How does one come to terms with the gap between aspiration and reality? For me, the answer came from the individuals who wrote these idyllic poems. As it turns out, the authors of Hatikvah and The New Colossus were not perfect disciples either; in their private lives, streamlined ideologies gave way to messy narratives.

In what is likely an apocryphal tale, a disheveled gentleman was once denied entrance to a Zionist convention at a Manhattan theater. When the rousing singing of Hatikvah was finally heard outside, he bellowed at the confused usher, “You can stop me, but never my song!” While the story’s origins are murky, it’s grounded in an undeniable fact: The final years of Naftali Herz Imber, the author of Hatikvah, were spent not among pioneers in Palestine, but on the bustling streets of New York City.

Imber did spend a few years in the Levant but quickly tired of the adventure. In 1892, he headed for America. (Chen Malul’s excellent Times of Israel piece relates the colorful details of Imber’s Palestine escapades). The immigrant cafés of the Lower East Side proved far more suitable to his mercurial character. He spent his days writing sharp-tongued poetry and letters to the editor, a faded literary prodigy turned court jester. As observed by the shrewd critics of Zionist mythology behind the satirical TV show HaYehudim Baim, Imber was destined to be Zionism’s ultimate one-hit wonder.

When Imber’s ship sailed into New York Harbor, he likely stepped on deck to admire the Statue of Liberty, the city’s latest ornament. By then, Emma Lazarus – whose iconic The New Colossus verses now adorn the Statue – was no longer alive. Even if they could have met, it’s improbable they would have sought each other’s company. Lazarus occupied a higher social stratus and possessed an utterly different temperament from Imber. She was a well-off Jewish American of Portuguese descent, and a promising talent who matured into an esteemed writer.

These disparate souls did, however, have this in common: Despite her all-American image, Lazarus shared Imber’s proto-Zionist zeal. In her 30s, having previously professed indifference to her heritage, Lazarus began passionately advocating for the pogrom- and poverty-stricken Russian Jewish community. She promoted not only mass immigration to America (as reflected in The New Colossus), but also the establishment of a refuge in Palestine. As her poetic Mother of Exiles greeted immigrants through America’s “golden door,” Lazarus herself envisaged a Jewish return to the promised land.

Imber and Lazarus’s personal histories – no longer eclipsed by the grand stature of their poems – helped me gain a finer understanding of Hatikvah and The New Colossus and, in the process, of myself.

In their original contexts, before the many layers of emotion and ideology, the poems read as prototypes, byproducts of the urgent Jewish brainstorming session of the turn of the 20th century: How might we solve European Jewry’s conundrum? America and Zionism were two of many solutions proffered; that historic moment also produced out-of-the-box curiosities such as the Uganda proposal and Baron de Hirsch’s Argentinian agricultural settlements. Looking back at those turbulent times, we must expect – and tolerate – trial-and-error, dogmatic inconsistencies, and geographic revolving doors. Imber and Lazarus’s twists and turns are but examples of this chaotic pattern: Many Zionist ideologues, including Nachman Syrkin, the founder of Labor Zionism, decamped from Eastern Europe directly to America, while hesitant American Jews, such as Louis Brandeis, eventually became avid supporters of the Zionist cause.

For Israeli expats like myself, and for other Zionists living in America, Imber and Lazarus can serve as approachable brand ambassadors, shedding a softer light on rigid – perhaps even accusatory – Zionist doctrines. I think of them as the cartoonish “devil and angel” characters of my internal ideological monologue: Imber says, “It’s okay, life is complicated,” to which Lazarus counters, “But still, don’t forget where you come from.”

Collectively, though, their stories carry a broader message. They remind us that Zionism – and, indeed, the modern Jewish experience – is one great experiment. We can offer hypotheses, try to optimize the results, but in the end we must let history run its course. To experiment means to let go of control, to accept that things may play out differently from how you anticipated or hoped. Imber’s Hatikvah is the ultimate voice of this experimental spirit: a Jewish soul always in flux, a hope never quite fully achieved.

A few months after we arrived in New York, I was fortunate to find a job downtown in a building with panoramic views of the New York Harbor. One slow day at the office, I decided to take a lengthy walk along the Battery Park waterfront.

Battery Park has been quietly transformed into a memory lane of sorts for Jewish immigration to America: By South Ferry terminal, a flagpole commemorates the tercentennial of the founding of North America’s Jewish community. Down by Castle Clinton, tourists are greeted by “The Immigrants,” a bronze sculpture depicting a multiethnic group led by a visibly Jewish figure. To the far west lies the Museum of Jewish Heritage, New York’s Holocaust Museum and home to the National Yiddish Theatre Folksbiene.

As I strolled through the paths, my attention was drawn to a humble shrine hidden amidst these grand monuments: A rectangular bronze plaque set in a limestone plinth, dedicated to Emma Lazarus, “Poet – Patriot.” The lion’s share of the monument’s inscription was allocated, inevitably, to the verses of The New Colossus. Far more interesting, however, was the dedication at the bottom, which disclosed that the memorial was presented in 1955 by the Federation of Jewish Women’s Organizations, and that “the foundation stone is the gift of the State of Israel.”

I was struck by the use of a stone from Israel in tribute to an American patriot. It evinced a mid-century Jewish American self-assuredness as well as, somewhat contradictorily, the expanding role of Israel in its identity. Unlike Imber, who in 1953 was reinterred in Jerusalem, Lazarus’s tombstone remains in New York, where she belongs. But her memory is carried in a post-1948 Jewish world reoriented around the existence of the State of Israel.

The marker also reflected the Women’s Organizations’ perception of Emma Lazarus, as a model for expressing gratitude and loyalty to America alongside support for Israel. I could relate; I too drew strength from this duality in Lazarus’ legacy.

After a few silent moments, I turned my back to the monument and looked out at the Statue of Liberty. Through Lazarus’s eyes, I no longer saw just a welcoming figure, shining its torch towards American shores, but also a herald gazing eastward, to Zion, Ayin leTziyon tzofiya.

To which I could swear Imber responded, with a mischievous wink, Od lo avda tikvatenu. We’ll always have our hope.

About the Author
Ben Zion Ferziger is an Israeli attorney living and working in NYC, and a member of Shazur/Interwoven (https://shazur.org/), a nonprofit dedicated to fostering appreciation and collaboration between the Israeli and American Jewish communities. Ben Zion taught in Sydney, Australia for a year in 2011-2012.
Related Topics
Related Posts
Comments