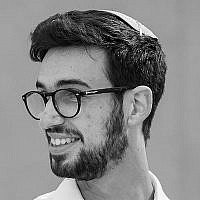 The Blogs
Joel Carmel
Apply for a Blog
Advertisement
Please note that the posts on The Blogs are contributed by third parties. The opinions, facts and any media content in them are presented solely by the authors, and neither The Times of Israel nor its partners assume any responsibility for them. Please contact us in case of abuse. In case of abuse,
Report this post. 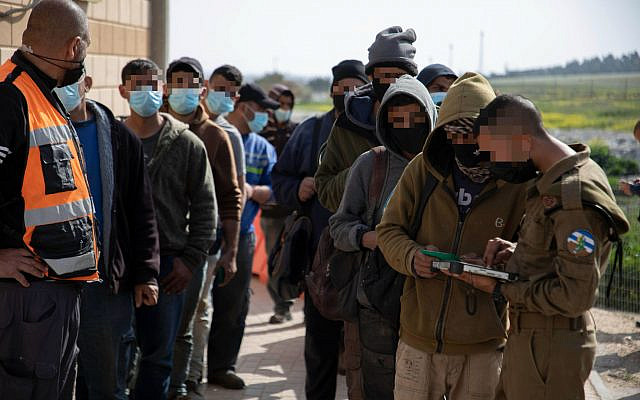 Palestinian workers wait in line for their permits to be checked by a Civil Administration soldier. Credit: Oren Ziv/Activestills

Hundreds of people came to see me at the reception window every day. Multiply that by weeks, months – and yet, I can’t remember a single face. They were a foreign mass – faceless, indistinguishable – whereas I, belying the euphemistic pretenses of the term “Civil Administration,” was part of a mechanism of military control.

The Civil Administration is not your garden variety bureaucratic system. Designed primarily to maintain and perpetuate the occupation, this body is made up of soldiers, officers, and civilian employees of the IDF, many of them settlers. Think of the last time you needed to settle your affairs with any government agency. Now imagine meeting me at the other end: a young officer of a different nationality, wearing the occupier’s uniform, who can barely put together a single correct sentence in your language. And as you request a travel permit for yourself, or maybe for the ambulance taking your daughter to the hospital, he is – that is, I am – engaged in a different task altogether: deepening the control of a foreign military force, indifferent at best and hostile at worst, over every aspect of your civilian life.

We are not (only) occupiers of territories; we are, mainly, occupiers of people. In deciding the fate of any application or request, the interest we serve is not that of the people whose lives we manage, but that of the mechanism controlling them. The passage of ambulances through checkpoints; water connections; family reunifications; construction permits; entry permits to Israel; registration in the population registry – the needs are many, but the consideration that decides their fate is the same: we do what’s good for us, whatever solidifies our control.

Even the official language no longer bothers to conceal this. Back in 1981, the Order that established the Civil Administration defined its purpose as follows:

The Civil Administration will manage civilian affairs in the area, according to the stipulations of this order, for the benefit and wellbeing of the population […].

Nowadays, the annual reports of the Coordinator of Government Activities in the Territories, the Civil Administration’s parent unit, unabashedly state that purpose as:

Initiating and promoting processes that shape the landscape in view of the Israeli interest.

The Israeli interest is obvious and widely known: management, oversight, monitoring, and control. To this end, we turn every basic right into a privilege – ours to grant, ours to deny. In the process, we follow the Roman dictum: divide and conquer. There were some – “compradors” or “interlocutors,” as we called them – who we made sure to hold close to us. They include Palestinian Authority officials, officers in the Palestinian security forces, businesspeople and journalists. For these people, who would regularly enter our offices directly instead of waiting with the crowds to be received at the reception window – who would share inside information and assessments of the situation – the procedure was completely different. Following meetings with them, I already knew in advance to expect the pile of applications that would land on my desk, whose conversion into permits would inevitably become my top priority.

There are two sides to this equation of our own making – two tiers. The top tier is comprised of well-connected members of the Palestinian elite, whose dependency on us we have deliberately cultivated for many years. The other tier is made up of all the rest – those whose basic rights are negotiable, who need to go well out of their way for a dubious chance to receive a favorable response that would meet a fundamental need. Thus, beyond total dependence on us, we have also cultivated, among and between members of the two groups, resentment, fear, and distrust. This is not the way to build a society. Or rather, this is exactly the kind of society that is formed when the overarching goal is fragmentation.

It is impossible to understand the occupation without getting to know us, the soldiers behind the reception windows at the District Coordination and Liaison offices, and our other Civil Administration and COGAT colleagues; without grasping how each aspect in the civilian lives of helpless subjects is under our military control; without knowing that invasions into homes and villages, wholesale arrests and the shooting of demonstrators are only one side of the violence intrinsic to the occupation. That bureaucratic violence is the bedrock of the regime we have been imposing and enforcing in the occupied territories for decades. The Palestinians, of course, are fully aware of this: from cradle to grave, their fate is subordinated to our needs.

About the Author
Joel Carmel made Aliyah from the UK in 2011. He studied at Yeshivat Maale Gilboa and the Hebrew University, and served in the Coordination of Government Activities in the Territories unit (COGAT) in the IDF. He now works for Breaking the Silence, an organisation of IDF veterans who publish testimonies of soldiers who served in the occupied territories, in order to stimulate public debate about the price of the ongoing occupation. Joel lives with his wife and daughter in Jerusalem.
Related Topics
Related Posts