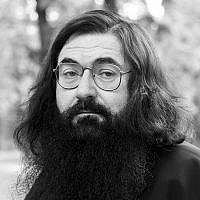 The Blogs
Dovid Katz
Apply for a Blog
Please note that the posts on The Blogs are contributed by third parties. The opinions, facts and any media content in them are presented solely by the authors, and neither The Times of Israel nor its partners assume any responsibility for them. Please contact us in case of abuse. In case of abuse,
Report this post. 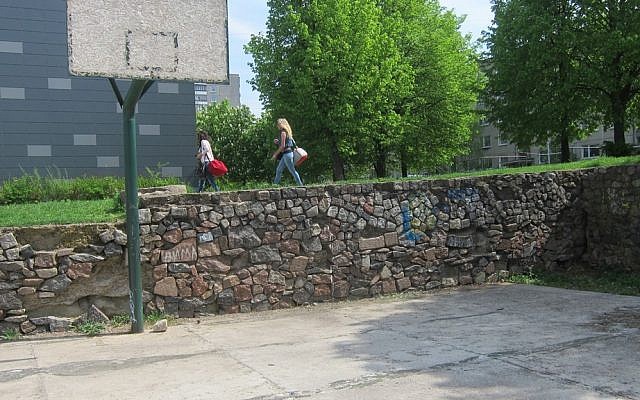 Jewish gravestone were used to build this school basketball court in Vilna, Lithuania. Now the evidence has been removed. (photo: DefendingHistory.com)

One of the predictable consequences of genocide is the spectacle of old cemeteries without relatives or descendants of the buried to care for the gravestones or the site. Some stones will fall, some will sink, and then some will just be taken as usable components for the foundations of houses, the ballast of roads or the walls of a basketball court.

In many parts of the erstwhile Soviet Union, the Nazi-led annihilation of the Jewish population was followed by the Soviets’ ideological disregard for religious traditions.

Happily there are nowadays organizations, local and international alike, that work to preserve old Jewish cemeteries whether by direct investment of resources or by political appeals to powers that be to respect them and prevent further desecration of gravestones that are often the only tangible public trace of a people destroyed.

Here in Lithuania, as in other post-Soviet countries that have joined the European Union and NATO, the democratic governments have generally reversed Soviet policy and worked to preserve and respect old Jewish cemeteries, to encourage efforts at restoration where possible, and to see in cemetery preservation a positive political opportunity as well. These efforts build good will with various “diasporas.” As ever there is a downside. Such projects can cover for efforts to falsify the history of the Holocaust and deflect attention from anti-Semitism by professing love of ancient Jewish relics, a game known among some local remnant Jewish communities in Eastern Europe as “the dead Jew business.” But that is all another chapter.

RESPECT for gravestones implies a measure of respect for the deceased persons they commemorate and, more generally, their people. In the case of Jewish lettering here in Eastern Europe, in view of the near complete “success” of the Holocaust, the converse is also particularly striking: to desecrate this one last authentic local relic of the annihilated people is to make a statement that they were rubbish or, perhaps even worse ― recyclable building material.

A frequent practical question concerns the situation where the Soviets made little or no attempt to hide their recycling of stones, but nowadays the municipal, local and national authorities have free choice about what to do.

For example, the large Jewish cemetery right here in Vilna that was known as Zarétshe after the adjacent neighborhood (today the fashionable, artsy Užupis section of Vilnius), was taken down by the Soviets and its stones hauled away in trucks to become the attractive retaining walls in the suburb called Lazdynai, and particularly the grounds of its middle school. 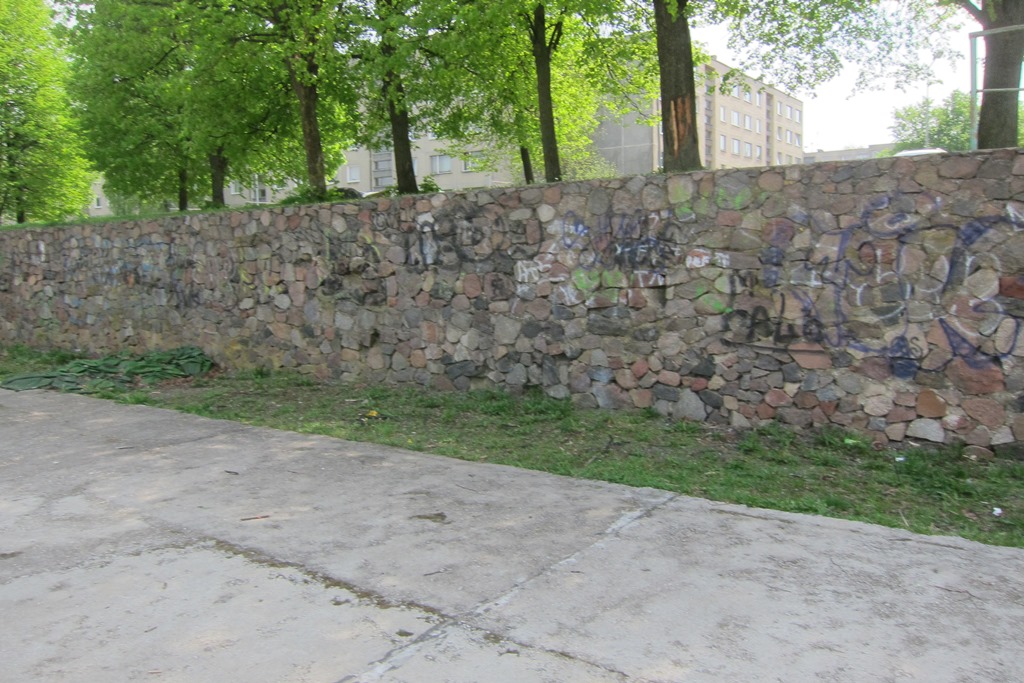 Much of the old Jewish cemetery of Zarétshe in Vilna (Vilnius) has been recycled to the pleasant community retaining walls that are a feature of the Lazdynai suburb of modern Vilnius. (photo: DefendingHistory.com)

In late 2011, our web journal Defending History published an article including photographs of many Hebrew inscriptions perfectly readable from the outside public space right here in the beautiful capital city of an EU and NATO country. It seemed untoward that in a once great Jewish city, where the Jewish population was almost entirely murdered, nobody seemed bothered by Jewish letters and fragments of Jewish symbols on local old stones defining the school’s basketball court and the public thoroughfares intersecting the grounds and nearby streets.

We concluded our 2011 report with the following thought:

For this school’s and the city’s educators, there is a magnificent opportunity for an inspiring project, […] for volunteer pupils under professional supervision to ‘deconstruct’ these walls and to digitize, order and analyze the remnants of one of the fabled cultures of Vilnius that has been calling out to them all these years through the letters on stones. There is an even more inspiring project on the cards: A team of pupils over a period of time can put the gravestones, as far as possible, together again, thus giving the once-upon-a-time Vilna residents they commemorate their names and sign-for-eternity back again. This is an opportunity that would be the envy of a many a school on this planet.

Our little team returned to the site recently to see if any progress had been made since December of 2011. We thought that maybe there would at least be a commemorative plaque telling the story of these stones. There was no trace of even such a symbolic effort at historical honesty. What we did find was even worse. 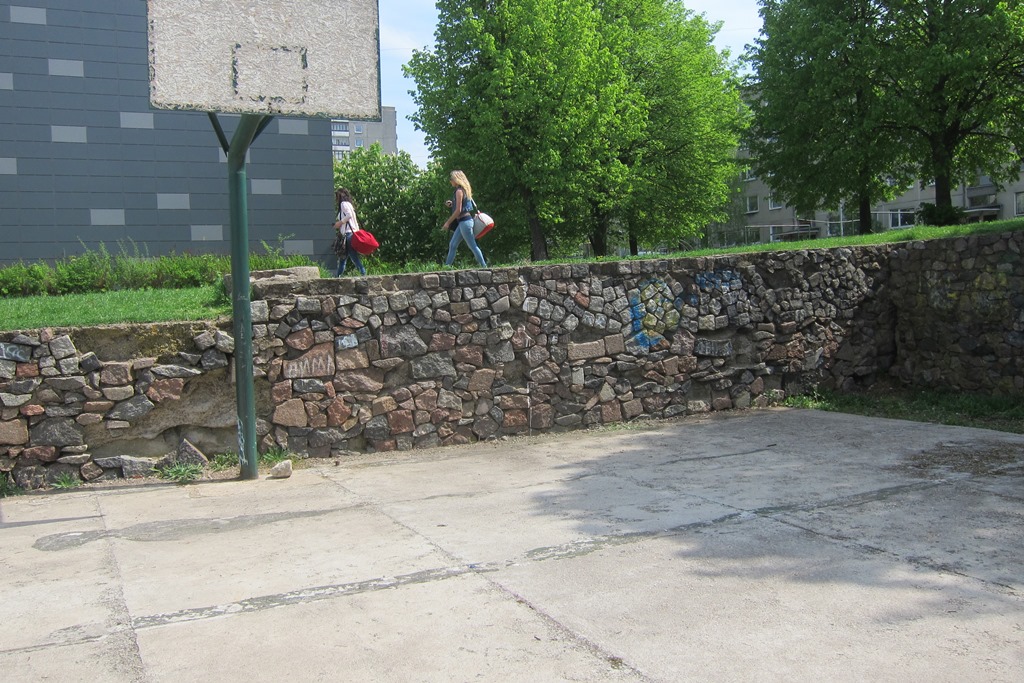 Nearly all the stones with visible Hebrew letters whose images we published in 2011 were simply ― removed, in apparent effort to cover up the history. Have these stones been thrown out? Or perhaps they have been preserved somewhere with dignity in an appropriate museum or public space with an indication of their history (from Zarétshe to the Lazdynai schoolyard to a dignified current situation)?

Surgery on a wall made of Jewish cemetery stones. Stones with conspicuous Hebrew lettering facing outward have simply been removed. But where are they now? (photo: DefendingHistory.com)

It is curious how vandalism can sometimes defeat the intent of the vandal. In more than one place, removal of the stone with outward-facing Hebrew letters has, lo and behold, exposed previously unseen letters from the newly exposed previously-internal surfaces. Graveyards have their justice too. 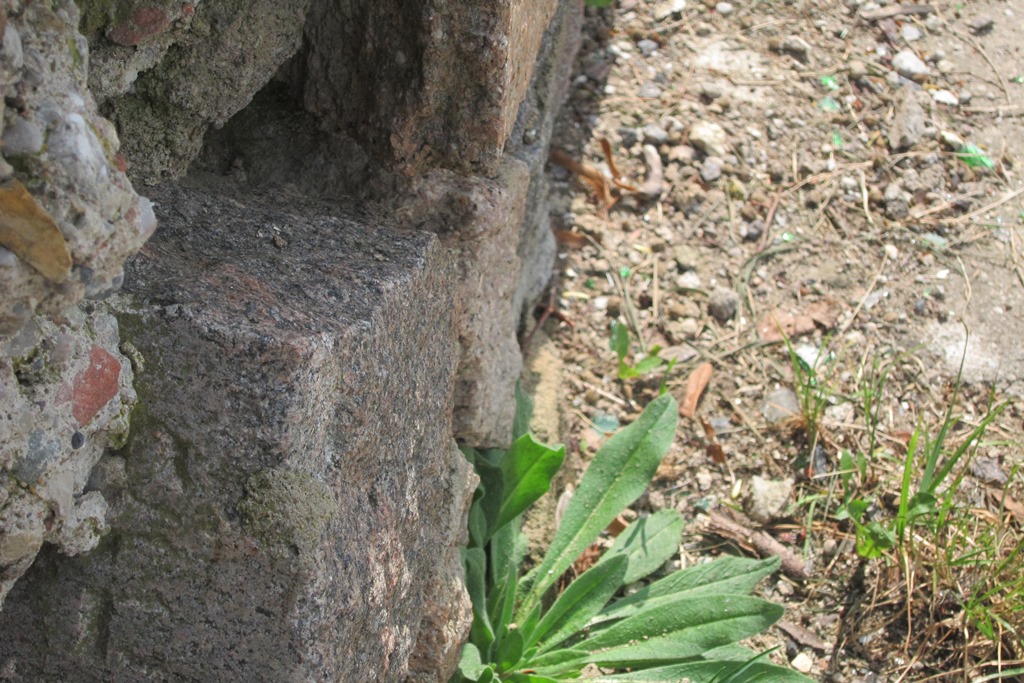 Higher powers seem to intervene: Removal of stones with outward facing Jewish lettering sometimes reveals previously hidden Jewish lettering on newly exposed stonefaces. This one has the old Hebrew abbreviation for “Our teacher, the rabbi” (in Ashkenazic pronunciation: moyréynu ho-ráv). Perhaps the continuation revealing the rabbi’s name is on a nearby stone in the same basketball court. (photo: DefendingHistory.com)

There are of course other major Jewish issues here. Neo-Nazi marches are provided with city centers on independence day. Heroic veterans of the Jewish Partisan resistance to the Nazis have still received no apologies for the (never publicly withdrawn) kangaroo investigations for “war crimes” intended to confound the history of the Holocaust. The expensive campaign to get the European Union to accept “double genocide” as revisionist World War II history is often accompanied in the Baltics by concomitant state projects to actually glorify the local collaborators and perpetrators of the Holocaust. None of this reflects on the fine everyday people of the land, among whom I have enjoyed living for many years.

But surely, the mayor and officials of Vilnius (some of whom were just in South Africa soliciting funds for a new Jewless Vilna Ghetto theme-park scheme) can easily and quickly restore the extant Jewish gravestones of the old Zarétshe cemetery to a form of dignity and commemoration appropriate to this great city. Then they can give the keys of the city to the defamed Jewish partisan heroes of the Vilna Ghetto, now in their nineties.

About the Author
Dovid Katz is the author of major works on Yiddish linguistics and Lithuanian Jewish (Litvak) culture, and in recent years, on Holocaust obfuscation in Eastern Europe. A native of New York City, he led Yiddish studies at Oxford for many years, and after a stint at Yale, settled in Vilnius, where he was professor of Judaic studies at Vilnius University from 1999 to 2010. He now edits the Web journal Defending History.com. His personal website is DovidKatz.net.
Comments