I first met Kirk Douglas in the dark.  It was sometime during 1955 or 1956 at the Arion Theatre in Middle Village.

My friend Terry and I were there to see a new Walt Disney movie, “20,000 Leagues Under the Sea,” based on the Jules Verne story of the same name. The story of Captain Nemo and his submarine, the “Nautilus,” was to us kids in those days’ scary science fiction, but perhaps the movie can now be seen as a metaphor for man’s efforts to conquer his world rather than tend to it. 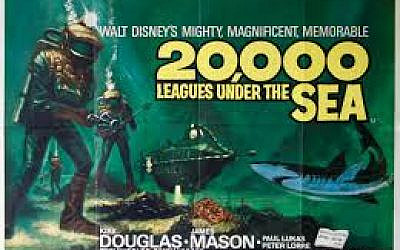 ouglas played a seaman who battles the non-human villain of the story, a giant squid. Of course, Kirk beats him off with a harpoon and by chopping off a hideous arm with an axe. The fact that the Nautilus was equipped with electrically charged deck plates added to the awe of the  battle scenes. And we screamed our approval when the squid slowly slid back into the churning sea. It wasn’t the last movie starring Douglas that I would see.

Douglas played good guys and bad guys.  He played Vikings and rebels.  He played cowboys, musicians and artists. He and his cleft chin did it all.

So, it was sad to hear that Kirk Douglas died last week at the age of 103 years. Although he stood only 5’ 9” tall, he was a giant in the motion picture industry, and in his later life, a giant in the American Jewish community, too.

Kirk’s real name was Issur Danielovitch Demsky. His parents were Jewish immigrants from what is now Belarus who settled in Amsterdam, New York.  The family spoke Yiddish at home.  Typically for immigrants from Russia, life was hard for the family. His father was a junk man whose way of life was central to Douglas’s autobiography, “The Ragman,” published in 1988.

Kirk entered the motion picture industry following service in the US Navy during World War II.  And, as was common in the movie world (think of Bernie Schwartz becoming Tony Curtis,) he changed his name from Izzie Demsky to Kirk Douglas.  Sure, as a kid, I didn’t even know he was Jewish, just a great actor.  But to those adults who did know his roots, his marriages to two non-Jewish women must have indicated a turning away from those roots.

But for all intents and purposes, the shonda of his marriages was cast aside when he acted and produced “Cast a Giant Shadow” in 1966 in which he played a heroic American officer who after World War II threw his lot in with the newborn Jewish State, David Daniel “Mickey” Marcus.  Marcus became the first Jewish general since the times of the Hashmonaim.

The motion picture opened to mixed reviews.  “The New York Times” panned it, “The New York Post” loved it, and so did millions of American Jews.  How could we not?  We schepped nachas over a story that entailed Jews militarily overcoming a vastly greater army and those same Jews under Marcus’ direction building a road through the Judean hills in order to bring supplies to a starving Jerusalem.

In real life, Marcus was inspired by the men he led and discovered that he was proud to be a Jew.

For much of his life, Douglas was not religiously observant, and it took a near death experience to make him wonder about his purpose in life. It happened following a 1991 helicopter crash that left two men dead and Douglas with serious back injuries.  Recovering from his injuries Kirk thought about his religion.  He later wrote, “I came to believe that I was spared because I had never come to grips with what it means to be Jewish.”

Kirk found willing teachers at Aish HaTorah and he rose to the occasion having a second celebration of his bar mitzvah at the age of 83, and by becoming a supporter of many Jewish causes.

To my surprise, in addition to his stellar acting career, Douglas also worked as an author, penning twelve books including some on Jewish themes. In 1997, Kirk wrote The Broken Mirror, a novel about the Holocaust aimed at younger readers. He followed that up in 1999 with Young Heroes of the Bible, which re-tells stories from the Torah for children.

To me, Kirk Douglas will always be that sailor.  Or maybe Vincent Van Gogh, or maybe Spartacus, or any one of a hundred other characters he brought to life.

Kirk Douglas was buried on Friday, February 7th, at Hollywood’s famous Westwood Memorial Park in Los Angeles.  May his memory be for a blessing.

The real life Mickey Marcus is buried at West Point Cemetery at the US Military Academy.  It’s the only grave there for an American killed fighting under the flag of another country.  His gravestone reads: “Colonel David Marcus—a Soldier for All Humanity.”  Each year the American Veterans of Israel Legacy Corporation holds a well-attended memorial program at the Jewish Chapel at West Point.  It’s worth the trip.

A version of this column appeared in the Jewish Press.

About the Author
Stephen M. Flatow is the father of Alisa Flatow who was murdered by Iranian sponsored Palestinian terrorists in April 1995 and the author of "A Father's Story: My Fight For Justice Against Iranian Terror" available from Devon Square Press and on Kindle. He is an oleh chadash.
Comments