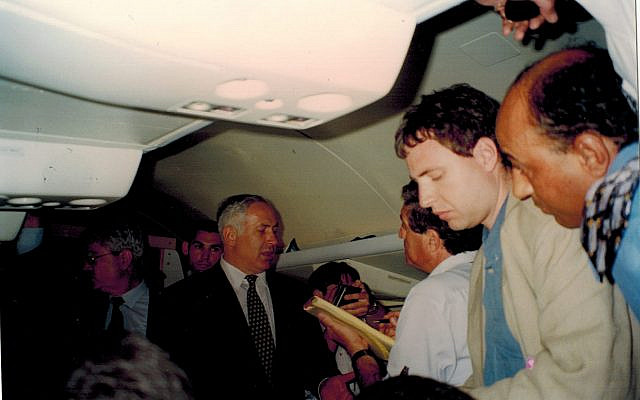 Every few years, like clockwork, a cry is heard across the land: the international news media is biased in favor of the Palestinians and unfair to Israel. This will happen again if the new Israeli government proceeds with plans to annex parts of the West Bank, a move sure to be widely portrayed as a reckless provocation.

The first salvo was fired in recent days with the publication of a “perspectives paper” by the Begin-Sadat Center for Strategic Studies at Bar-Ilan University, claiming that “biased and misleading reporting about the Israeli-Arab conflict is as prevalent in 2020 as ever.” Expect the Government Press Office and various watchdog groups like CAMERA and honestreporting.com to follow suit once annexation gets going.

I am quite familiar with this. During the Second Intifada, I was both the bureau chief of the Associated Press in Jerusalem and the chairman of the Foreign Press Association, the industry group representing scores of media outlets from around the world covering the Israeli-Palestinian story. We found ourselves constantly wrestling with the administrations of both Ariel Sharon and Yasser Arafat on access and security issues. Neither side seemed to like the media much, which reporters will generally consider a badge of honor in the context of a conflict.

Israel is a deeply divided place, but that was a time of unusual consensus. The widely held idea was that Ehud Barak had tabled reasonable peace offers at Camp David and Taba and was rewarded with a concerted campaign of terrorism. To this day it isn’t clear whether it was somehow directed by Arafat or whether he just rode the tiger, but you didn’t need to be a cynic to get the sense that the Palestinian leader was playing games.

So was Israel, when it came to dealing with the press.

Early on in the intifada the GPO took away the accreditation of most Palestinian staffers of foreign media, making it nearly impossible for them to function anywhere near the army (which was everywhere). Then Israel forbade Israelis — including Israeli videographers — from entering the West Bank in most cases, on reasonable security grounds. And then the government decided that foreign videographers were not eligible for visas as journalists but rather would be treated as “technicians” needing work permits from the Labor Ministry (whose concern was protecting locals and which for months issued no permits). I remember appearing at the relevant Knesset committee and asking: “Who are we to use as videographers in the West Bank, if not Palestinians, not Israelis and not foreigners? Martians?” No one seemed to care.

These types of stunts will not win a country friends. But they reflected Israelis’ widespread sense that they are under siege and the media was too soft on the attackers.

The global media tends to quite sanctimoniously deny charges of bias in news reports. Serious news organizations apply journalistic rigor. The opinions of the journalists should not drive coverage.

On the other hand, it is quite fashionable these days to  deny the very idea of objectivity. Sophisticates will argue that every choice a journalist makes, not just in presentation but in selection, is a function of personal experience and preference (critics would add the dread word “privilege”). While such claims can be overcooked, they do have an element of truth.  I am not comfortable claiming a reporter’s dislike of Nazis would in no way affect coverage of them (I also do not believe that anyone mentioning Nazis automatically loses the argument).

So is there a prevalent position of foreign correspondents who end up in Israel?

In my experience, yes – but it’s not just the one that the hand-wringers of hasbara would have you believe. Most of them accept Israel’s right to exist as a Jewish-majority state (if in some cases begrudgingly). To Israelis that means little (Of course they accept it! Anything else would be anti-Semitism!). But many people do not accept Israel as currently constituted, for many reasons, as we can see from the very existence of a separate word for those who do. That word is “Zionists.”

Since this has not escaped the notice of the Palestinians, they too often harbor grave misgivings about the foreign press. Factor in that so many foreign media here have senior staff with strong ties to Israel (myself included) and you might start to understand (yes, many Palestinians also serve in the ranks, as we have seen).

Why is it that Israelis see it backwards? The reason is the occupation. Zionist or not, I can hardly think of a foreign correspondent who loves the status quo in the West Bank, and before 2005 in Gaza. It is not inconceivable that this is reflected in the coverage.

Perhaps, for example, there will be stories about how Israel exercises vast and occasionally heartless control over millions of people who cannot vote in Israeli elections. The journalist does not have to take a stand for such stories to be unflattering by definition. And even if the story mentions the Palestinians’ history of rejected peace offers and grisly terrorist attacks, and even if it dutifully chronicles every case of anti-Israel incitement from Palestinian textbooks and TV, it will still fail to win friends for the occupation.

It is no surprise that foreign correspondents are not generally fans of the occupation, even if they appreciate Israel’s security challenges. Foreign correspondents tend to be reasonably well-educated, intelligent and informed individuals who are not especially religious. Israelis who tick those boxes are, nine times out of 10, also not big fans of the grim situation. And that includes the country’s top security officials.

It is reasonable to assume that the foreign press stationed in the United States are not particularly enamored with Donald Trump or gun culture. It is reasonable to assume the foreign press in France are not partisans of Marine Le Pen. It’s not a popular point to make as a journalist; it risks the buzzsaw of self-flagellation about cultural elites; but it’s the truth.

The Western world is in a cultural war, and journalists tend to be on the “liberal” side of it. Not all, but most. So are most novelists, jurists, medical professionals, computer programmers and rock musicians, in my experience. That’s just how it is, and it can hardly be otherwise for those who dedicate their lives to chronicling the story of ordinary people and speaking truth to power.

The hope is that journalists will not allow their opinions excessive influence on their product — a product critical to maintaining an informed citizenry. If Le Pen makes an important and correct point, it should be duly and dispassionately reported.  Same with Trump. And by and large, that is what happens, even now, at our very fraught moment in the global conversation.

Impartiality does not demand neutrality always. Fairness does not require both sides-ism. I have a lot of sympathy for Israel’s predicament; it does not have many good options. But that doesn’t mean the paranoia is justified, and it is neither fair nor wise to take shots at the messenger. That is precisely what goes on. The more deluded go so far as to charge “anti-Semitism,” eroding, degrading and cheapening the term.

A few years ago a former colleague, Matti Friedman, made a splash with an article in Tablet claiming to offer in “insider’s view” on the supposed media bias. Inter alia he claimed that the AP bureau in Jerusalem found out in early 2009 that Ehud Olmert had offered the Palestinians generous peace terms which were rebuffed, and “top editors” in the bureau decided to kill the story in order to protect a “narrative” that “the Palestinians were moderate and the Israelis recalcitrant and increasingly extreme.” Dripping with gravitas, he outlined the plot: “Reporting the Olmert offer … would make that narrative look like nonsense. And so we were instructed to ignore it, and did, for more than a year and a half.”

Where to begin, with a claim so preposterous? First, the peace proposal had in fact been widely reported (here’s the AP story itself, from 2008). Second, the agency is positively obsessed with exclusives because of cut-throat competition with Reuters, and the notion that it would forego one to serve some conspiratorial local agenda is fantastical. Third, the local bureau is not independent: it reports to the Middle East editor in Cairo (a position I held some years after this alleged incident) and the idea of such subterfuge is genuinely absurd.

That’s the essence. But the essence doesn’t matter much to a propaganda machine. What matters is the arrangement of select facts to support an agenda. The author of the BESA center study, one Rafael Castro, proposed exploiting the “diminishing salaries and budgets of journalists” to essentially do just that, offering courses on “historical, cultural, and religious literacy” and compensating those who then succeeded in “passing online tests.”

I would advise a thriftier path.

The occupation is not a product that can be sold. The Jewish settlements (on land that Israel to date has in fact not annexed) cannot be sold. The same applies to separate legal systems for Arabs and Jews on the same smallish unit of territory. Not after 53 years.

A unilateral annexation of disputed Jewish hilltops gerrymandered to leave out the Palestinians in their valleys — maintaining on paper the majority proportion of Jews while producing history’s most ridiculous map — will not sell either, to audiences around the world. It is something no Israeli government contemplated since capturing the land, and which no significant outside players  until Trump would have dreamed to support. It risks mayhem in the region and beyond.

If you go that route, you will be on your own, except for the US Evangelicals at whose behest Trump prods Israel into taking such a gamble. Ask yourself if you share their views on Armageddon.