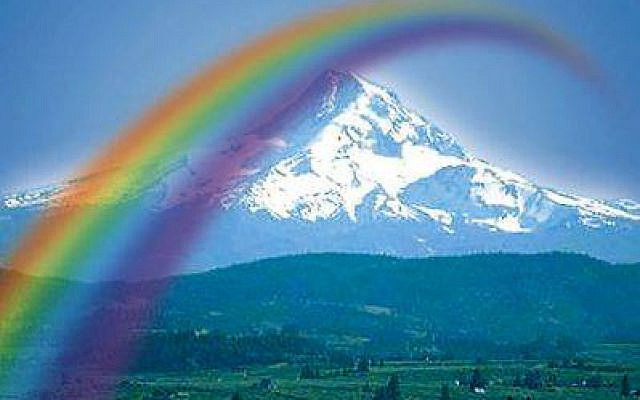 Exodus on the Path of the Divine Rainbow leading from the Earth through the highest Divine World to the reality of the New Heaven and the New Earth. Source: Design by Svetlana Gushmakova

The Fourth Heaven is connected with the Sefirah Netsah (the Eternity or Cyclicity). We could enter into it  through the Divine Rainbow,  emanating from the CREATOR. For this Sefirah the great Kabbalist Leo Schaya writes: The emanation of grace is the Sefirah netsah, divine ‘victory’; this is the ‘male’, active and positive power of the creator, which produces all the manifested worlds in giving life to all beings and things by ‘extension, multiplication and force’. Thanks to netsah, the transcendent beauty of God, tifereth, is spread over the whole of creation. (Leo Schaya, The Universal meaning of the Kabbalah, p. 54).

In the system of Z’ev ben Shimon Halevi, the Sefirah Netsah, together with Hod and Yesod, is connected with the Third Heaven. For this Heaven Halevi also writes: It is to this place that incarnate man can rise during prayer and be instructed in the mysteries of Creation. (A Kabbalistic Universe, p. 70)

In the accepted system of Ten Heavens, the Divine Blessing, connected with the Sefirah Netsah, is the Creative Divine Rainbow. This Rainbow radiates from the Throne of God for the New Creation (the new Heavenly-Jerusalem cosmic cycle) and it is a sign of the New Covenant that the CREATOR makes with humankind. It is the majestic Rainbow of creative coloured rays of light, which, according to Leo Shaya, produces all the manifested worlds in giving life to all beings and things through ‘expansion, multiplication and power’. In their visions, the great Old Testament prophet Ezekiel (1:26-28) and the disciple of Jesus Christ, St. John in the Revelation (4:2-3), also describe a majestic Rainbow emanating from the throne of God.

As I  mentioned in one of  my previous Posts, Exodus and the Rainbow of the New Covenant from 10.11.2022,  the Divine Rainbow of the New Covenant refers not only to the magnificent Rainbow arc appearing in the sky as a sign of God’s promise never again to harm the Earth with a flood, but is in fact much more: a column of living Rainbow Light stretching through the whole vertical structure of Creation and constituting its very existence. This Divine Rainbow  radiating from the Throne of God is a revelation about the mystery of the Universe and a blessing from  G-d for eternal Life, Divine Love, endless Wisdom and ultimate Truth. This is why the great Kabbalist Leo Schaya writes that the emanation of grace is the Sefirah netsah, divine ‘victory’; this is the ‘male’, active and positive power of the creator, which produces all the manifested worlds in giving life to all beings and things by ‘extension, multiplication and force’.

The emanating Divine Rainbow constitutes the whole of Creation as a magnificent Divine Temple and forms a dome of light within it. This Divine Rainbow, which builds the whole Universe, now appears as the Fourth Heaven, as the Creative Rainbow of the New Covenant of G-d with humankind. From the perspective of the Third Heaven (Sefirah Hod), this Divine  Rainbow is structured into Seven Temples of Life (Please, see the previous Post); from the perspective of the Fifth Heaven (Sefirah Tifereth), thanks to netsah, the transcendent beauty of God, tifereth, is spread over the whole of creation (Please, see the above the quotation from Leo Schaya).

The essence of the Fourth Heaven, i.e., the creative Divine Rainbow of the New Covenant, is the metaphysical Rainbow of the living Light which contains the secrets of the whole vertical structure of the Universe, traces our path of ascension up to the Throne of God and down to the reality of the New Heaven and the New Earth. In almost every spiritual tradition we can find myths and legends which depict the arc of the physical rainbow as a dream-path for ascent to Heaven. The emerging Creative Divine Rainbow in the Fourth Heaven will transform these legends and myths into a reality.

In fact, the Creative Divine Rainbow traces the Nine-Fold Rainbow Path and leads us to the highest Divine world. This Path goes through the whole vertical structure of Creation and guides us to the reality of the New Heaven and the New Earth.  We can compare this Rainbow Path with a gigantic cosmic-spiritual ladder which marks the steps of humankind’s ascent to the Kingdom of God with many mansions. Each one of these steps is an enormously vast domain for spiritual work leading to transformation, illumination and transfiguration. In other words, the Divine Rainbow of the New Covenant is both the Path itself and the living Light on the Path. This is why the Rainbow of the New Covenant is, on the one hand, a very inspiring, exciting and delightful image, but, on the other hand – an actual, constructive and creative Path full of endless spiritual potential. Each Step of the Path covers a vast area of ​​spiritual work and offers a rich variety of appropriate methods, techniques, and spiritual practices.

Here it is important to emphasize that the Steps on the Rainbow Path are not divided, encapsulated in themselves Divine emanations, but “living”, dynamic “radiations”, which constantly interact and reflect each other, following the Kabbalistic Paths of their interpenetration! For this reason, we can find projections of the Divine Rainbow, radiating from the Throne of God in all other Sefiroth, including the Sefirah Netsah, where it produces all manifested worlds, giving life to all beings and things through expansion, multiplication and power.

If we recall the famous Jacob’s ladder as a model of the Tree of Life and a Path to the highest Divine World, we could find many similarities, but certain differences as well, which are related to the essence of our epoch. The Path of the Divine Rainbow not only leads to the highest Divine world, but it also helps us to enter into the reality of the Heavenly Jerusalem cosmic cycle as the Kingdom of God, where there are many mansions, that is, the spiritual worlds of the various world religions. It also helps us to establish the reality of the New Heaven and the New Earth, i.e., the new Heavenly Jerusalem  cosmic cycle in the life of humankind.