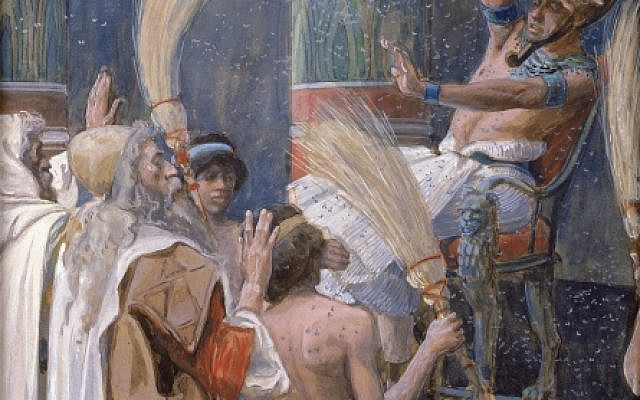 According to medieval Jewish bible commentators, the fourth plague suffered by the Egyptians was an invasion of destructive herds of wild animals. Yet Christian, and indeed many modern Jewish translations, believe the plague was an inundation of flies. The Christian interpretations derive from the Septuagint, the ancient Greek translation of the Torah, where the plague is attributed to the Cynomya fly, usually translated as dog-fly.

The disagreement between the two opinions of the plague’s nature is highlighted in the Midrash, in a clash between Rabbis Yehuda and Nehemiah, two of the most prolific disputants in Midrashic literature. Rabbi Yehuda maintains that the Egyptians would send the Israelites into the desert to fetch bears, lions and leopards. As a punishment the Egyptians themselves were subjected to a plague of wild animals. Rabbi Nehemiah does not accept this analysis. He says the plague was of hornets and gnats.

The midrash decides that R. Yehudah’s interpretation is more reasonable. When the plague of frogs came an end the Torah says that the animals all died. But when the fourth plague ended, it does not say the creatures died, it says, that ‘not one of them was left’. If, as R. Nehemiah maintains, the plague had been of hornets and gnats then the Torah could quite reasonably have declared that they died: a swarm of dead insects is almost as unpleasant as live ones. The fact that it says that ‘not one of them was left’ implies that they departed at the end of the plague. For if they had died, the Egyptians would have been able to use their skins and meat. And clearly there would have been no point in the plague had the Egyptians then been able to benefit from their carcasses.

The Midrash’s rationale is followed by medieval Jewish commentators, for whom reason and analysis are the primary tools of Torah interpretation.  Contemporary commentators however are more interested in the philology of the text. They focus on the meaning of the Hebrew word, arov, the name given to the plague. It comes from a root meaning to merge, blend or mix (an eruv is a merging of boundaries).  Arov could possibly be understood as meaning a melange of beasts, but a swarm of insects seems to be a far more accurate translation.

At the end of the day it doesn’t really matter what the plague consisted of. Of more relevance, at least in our time, is the question of how to interpret the text of the Torah. Of course we don’t restrict our interpretations to either philology or analysis, we use both. But the Fourth Plague debate shows us why each is important.

Harry Freedman’s 2014 book The Talmud: A Biography is now available in paperback on Amazon. His most recent book,  Kabbalah: Secrecy, Scandal and the Soul is available from Bloomsbury Publications, Amazon or www.harryfreedmanbooks.com. His biography of Rabbi Dr Louis Jacobs will be publsihed in the second half of 2020.