The Blogs
Ari Afilalo
Apply for a Blog
Please note that the posts on The Blogs are contributed by third parties. The opinions, facts and any media content in them are presented solely by the authors, and neither The Times of Israel nor its partners assume any responsibility for them. Please contact us in case of abuse. In case of abuse,
Report this post. 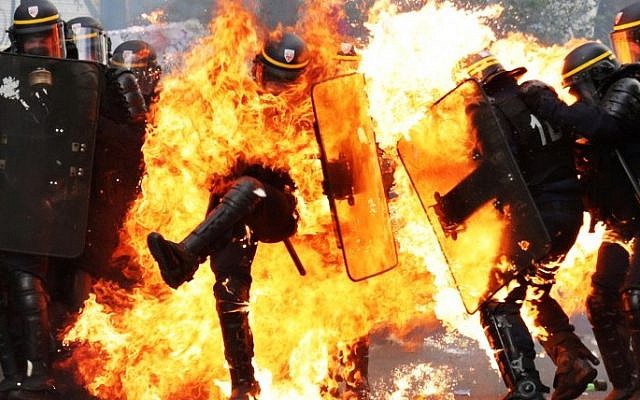 French CRS anti-riot police officers are engulfed in flames as they face protesters during a march for the annual May Day workers' rally in Paris on May 1, 2017. (AFP PHOTO / Zakaria ABDELKAFI)

The France of my youth is burning. The six police officers who were firebombed by homegrown thugs at the May 1 (Labor Day) demonstrations are its latest casualties. And Marine Le Pen and her purveyors of hatred, whom we thought had been muted forever after World War II, are trying to seize the moment to destroy it.

The France of my youth was a terre d’accueil, a generous host land. It took in my North African Jewish parents in 1964. We lived alongside Muslim neighbors in a working class, ethnic suburb of Paris. My father owned a small fruit and vegetables business. He had one employee, a Muslim Arab named Mustafa, who moonlit to babysit me and my brother. My closest friend was Adel, the sixth child of a large Arab family.

As a child, I felt more cultural affinity for Mustafa and Adel than to the “real French.” Jews and Muslims were more observant and our religions were based on clear-cut ritual laws. Adel and I ate our kosher and halal lunches in the courtyard or at home, away from the cafeteria. We were superstitious and feared the genies that our parents said roamed the cemetery across the road. And we shared a similar emotive family culture: virtual idolization of the mother, unquestioned respect for the elders, special love and protection for mentally ill relatives, and of course the food culture of the Mediterranean Basin.

I did not discover the broader France until I was a teenager. That France was a land of universalism and enlightenment. Its language and books took me out of my warm and loving neighborhood to the world of ideas. Its thirst to debate and discuss, and its unbending affirmation of the “Right to Be Different,” drew me to discover and appreciate the ways of others even as I became more grounded in my Moroccan Jewish way. Its hermetic distinction between the public and the private spaces, and the associated tolerance for all manner of private lifestyles, unleashed a natural love for fellow humans free of petty judgment and narrow-mindedness.

I left my neighborhood to study, travel the world, and end up as a law professor in the United States, thanks to the France of my youth. Yet France has long had another side, intolerant and dark, and it is now threatening my France.

If Marine Le Pen prevails this weekend, she may start with the Muslims, but will surely end with the Jews. She will attack our rituals because she hates us both. Her slaughtering laws will ban halal and kosher meats. Her public health laws will medicalize circumcision and deny Muslim and Jewish parents alike the right to bring their children into the sacred alliance of our joint ancestor, Abraham. Most fundamentally, she will root out the spirit of acceptance of the Other that has characterized the France of my youth, to unleash fear, anger, and retrenchment.

My wife and I wandered into a synagogue while in Paris two years ago. The rabbi had just started his sermon. He posed the question: “When do we leave France?” The answer, derived from Jacob’s decision to leave the land of his father-in-law Laban, was that you leave “when you cannot recognize the France that you knew yesterday.” Emmanuel Macron’s France may not be perfect, but it will give people of goodwill the chance to reclaim France’s liberty, equality and brotherhood ideals. Le Pen’s France will be unrecognizable, and for Muslims and Jews alike will sound the toll of departure and exile.

About the Author
Ari Afilalo (afilalo@camden.rutgers.edu) is a professor of law at Rutgers Law School in New Jersey. He grew up in France, the son of a Jewish Moroccan family, in an ethnically mixed working class neighborhood. He has published extensively in the field of international law. He is the current president of the West Side Sephardic Synagogue in Manhattan.
Related Topics
Related Posts
Comments