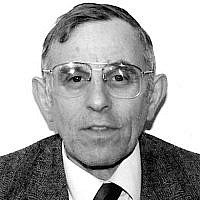 The Blogs
Shlomo Slonim
Apply for a Blog
Please note that the posts on The Blogs are contributed by third parties. The opinions, facts and any media content in them are presented solely by the authors, and neither The Times of Israel nor its partners assume any responsibility for them. Please contact us in case of abuse. In case of abuse,
Report this post.

From all indications it appears clear that the French role in support of the UNESCO resolution that referred to the Temple Mount as an exclusively Muslim Holy Site was no accident. The French Foreign Ministry was well aware that this assertion constituted a repudiation of Bible and of the long historical record of Jewish connection with the Temple Mount. Islam only emerged more than a millennium after the Israelites had sanctified the Mount. In the long dark exile that Jewry endured, the cry “Next year in Jerusalem” was proclaimed faithfully generation after generation. Little wonder that President Clinton was thunderstruck when Arafat averred that the Jews had no historical connection with the Temple Mount. Yet now, France seems intent on detaching Israel from this venerated site in Jewish religion and history.

More ominously still, the French demarche appears to be part of a wider script in which the endgame is UN Security Council confirmation of a Palestinian state, with east Jerusalem, including the Temple Mount, as its capital. The strategy would be implemented in stages.

The first step, to be taken very likely only after the U.S.presidential elections, would entail the Palestinians’ proclaiming an independent state. To secure widespread recognition of such an act, the new state would have to be perceived – at least to the satisfaction of France and other democracies – as a united entity with “democratic” credentials. This might explain why Abu Mazen suddenly announced that elections (since postponed) would be held in both the West Bank and the Gaza strip. By this means, both unity and democracy would be show-cased, at least in theory.

To overcome Israeli objections, the Security Council would be invoked to affirm UN recognition of the “new” facts, which – ostensibly – merely confirm the General Assembly’s resolution of November 29, 1947 for the establishment in Palestine of two states – a Jewish state and an Arab state. The sponsors would be undeterred by the fact that the Palestinian Arabs steadily rejected partition – then and still today – and that their conduct has incessantly been one of aggression against the Jewish state with the intention of annihilating it.

The adoption of a resolution under Chapter 7 of the UN Charter is expected to carry with it a peremptory character and override earlier Security Council resolutions that called for negotiations between the parties and acknowledged that Israel was entitled to “secure and recognized boundaries.” The hope of the sponsors would be that in the period of the “interregnum” after the U.S. elections, President Obama might endorse, at best, and at least not veto a projected Security Council resolution.

That the Security Council is not empowered to “establish” states is completely ignored by the promoters of this scheme. Yet, as a great British Judge on the International Court of Justice, Sir Gerald Fitzmaurice, once explained: “Even when acting under Chapter 7 of the UN Charter itself, the Security Council has no power to abrogate or alter territorial rights, whether of sovereignty or administration.” After all, “It was to keep the peace, not to change the world order, that the Security Council was set up.” Thus, a resolution proclaiming the borders of a Palestinian state that trespass on what Israel has proclaimed as its united capital, would be ultra vires (beyond the legal powers) of the Security Council under the UN Charter.

Worse than the blatant violation of UN law and international law, however, would be the facts on the ground, which inevitably would induce conflict. Israel, presumably, might be led to annex whatever territories it considers essential to maintain “secure and recognized borders.” The Palestinians, including Gaza, would be emboldened to attempt to implement their “sovereign” authority in areas that Israel considers part of its national sovereignty. Clashes would multiply, and outside elements, whose assistance would be solicited by the Palestinians, might feel justified in intervening, under a blanket of so-called Security Council authorization, to aid the projected Arab state.

In short, the whole scheme is a design for fostering war, not peace.

Shlomo Slonim is the James G. McDonald Professor Emeritus of American History at the Hebrew University of Jerusalem and author of Jerusalem in America’s Foreign Policy.

About the Author
Shlomo Slonim is the James G. McDonald Professor Emeritus of American History at the Hebrew University of Jerusalem and author of Jerusalem in America's Foreign Policy.
Comments