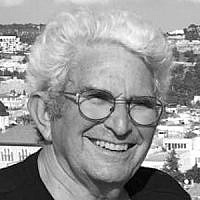 The Blogs
Larry Price
Apply for a Blog
Please note that the posts on The Blogs are contributed by third parties. The opinions, facts and any media content in them are presented solely by the authors, and neither The Times of Israel nor its partners assume any responsibility for them. Please contact us in case of abuse. In case of abuse,
Report this post.

You may be interested to know the background of the “French Law” the Israeli Knesset is set to vote on that would prohibit the prosecution of an elected government official, like Prime Minister Benjamin Netanyahu, while in office. Apparently, it was a move by a friend of then French President Jacques Chirac to keep him out of prison.

“In 1995, Roland Dumas was appointed president of the Council by François Mitterrand. Roland Dumas attracted major controversy twice. First, he appeared in scandals regarding the Elf Aquitaine oil company, with many details regarding his mistress, Christine Deviers-Joncour, and his expensive tastes in clothing appearing in the press.[33] Then, the Council put forth some highly controversial opinions in a decision related to the International Criminal Court, in Decision 98–408 DC, declaring that the sitting President of the Republic could be tried criminally only by the High Court of Justice, a special court organized by Parliament and originally meant for cases of high treason. This, in essence, ensured that Jacques Chirac would not face criminal charges until he left office. This controversial decision is now moot since the rules of responsibility of the President of the Republic were redefined by the French constitutional law of 23 July 2008.[34] In 1999, because of the Elf scandal, Roland Dumas put himself on leave from the Council and Yves Guéna assumed the interim presidency.”

For more information, and Chirac’s eventual indictment for corruption including “food expenses” and the ultimate guilty sentence, ” see: https://en.wikipedia.org/wiki/Jacques_Chirac

“Chirac has been named in several cases of alleged corruption that occurred during his term as mayor, some of which have led to felony convictions of some politicians and aides. However, a controversial judicial decision in 1999 granted Chirac immunity while he was president of France. He refused to testify on these matters, arguing that it would be incompatible with his presidential functions. Investigations concerning the running of Paris’s city hall, the number of whose municipal employees jumped by 25% from 1977 to 1995 (with 2,000 out of approximately 35,000 coming from the Corrèze region where Chirac had held his seat as deputy), as well as a lack of financial transparency (marchés publics) and the communal debt, were thwarted by the legal impossibility of questioning him as president. The conditions of the privatisation of the Parisian water network, acquired very cheaply by the Générale and the Lyonnaise des Eaux, then directed by Jérôme Monod, a close friend of Chirac, were also criticised. Furthermore, the satirical newspaper Le Canard enchaîné revealed the astronomical “food expenses” paid by the Parisian municipality (€15 million a year according to the Canard), expenses managed by Roger Romani (who allegedly destroyed all archives of the period 1978–93 during night raids in 1999–2000). Thousands of people were invited each year to receptions in the Paris city hall, while many political, media and artistic personalities were hosted in private flats owned by the city.[63]

Chirac’s immunity from prosecution ended in May 2007, when he left office as president. In November 2007 a preliminary charge of misuse of public funds was filed against him.[64] Chirac is said to be the first former French head of state to be formally placed under investigation for a crime.[65] On 30 October 2009, a judge ordered Chirac to stand trial on embezzlement charges, dating back to his time as mayor of Paris.[66]

On 7 March 2011, he went on trial on charges of diverting public funds, accused of giving fictional city jobs to twenty-eight activists of his political party while serving as the mayor of Paris (1977–95).[67][67][68] Along with Chirac, nine others stood trial in two separate cases, one dealing with fictional jobs for 21 people and the other with jobs for the remaining seven.[67] The President of Union for a Popular Movement, who later served as France’s Minister of Foreign Affairs, Alain Juppé, was sentenced to a 14-month suspended prison sentence for the same case in 2004.[69](