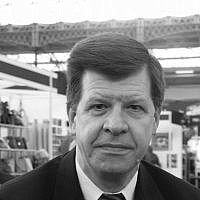 The Blogs
Philip Jolly
Apply for a Blog
Advertisement
Please note that the posts on The Blogs are contributed by third parties. The opinions, facts and any media content in them are presented solely by the authors, and neither The Times of Israel nor its partners assume any responsibility for them. Please contact us in case of abuse. In case of abuse,
Report this post.

My aim is not to discuss the latest political events in Israel, here, which relate to the appointment of a new Cabinet. Given the fact the new Cabinet includes Far Right, extremist Zionists, who want to expand the settlements and deny the rights of Arabs, it is obvious this will lead to conflict with the Palestinians and to violence. There is no other outcome that is possible. That is exactly what Hamas wants, by the way.

The topic of this article is the future of Israel, as a nation and a state. More particularly, I would like to dwell upon the issue of the 1-state solution Vs the 2-state solution, and what either of them would entail. It is clear to me that the so-called 1-state solution is a recipe for disaster. I shall explain briefly why. I would like to point out that it is supported by a category of individuals that I would call idiots, in Israel, and they can be found both on the Left and on the Right.

The idiots on the Left say that a Jewish State cannot be ‘democratic’ as purely ‘Jewish’, hence, to be democratic, it must integrate all the Palestinians, i.e. no longer be a ‘Jewish’ State but a multi-faith federation and multi-ethnic state. What those naive idiots cannot see is that the Arabs will soon be in a majority in such a political entity. At that point, there will be 2 options.

The 1st option will be to deny the Arabs within the expanded state full voting and other rights. However, this will be untenable in a state that, precisely, aims to be ‘democratic’! (Some could argue this is the position of Arab Israelis as it is, within Israel proper, already, in fact…) You can imagine the unrest within the new state if Arabs/ non-Jews were deliberately kept in an inferior position: riots, demonstrations, murders, etc.

So, the 2nd option, and this is the logic of the move to a 1-state solution, will be to give the Arabs full voting and other rights (property rights, military service, etc.). What you will have, right away, is a majority of voters who are non-Jews within the expanded state. There are other, well-known examples of such a situation, in historical and political terms: for example, South Africa (where Blacks are the majority and have taken over the political management of the country) or, now, Northern Ireland (where Catholics will soon be in a position to dictate terms). Sooner or later, as history proves, the majority will call the shots (‘one man, one vote’).

More particularly, Arabs within the expanded Israeli state will be in a position to impose the Right of Return for those left outside (Palestinians in refugee camps in Lebanon, etc.). By then, you will end up with 60%-70% Arabs and the rest Jews. This means that Jews will be in a minority within the new state. As they are in England, or France, or the USA. It won’t be a Jewish State, but it won’t be a safe country for Jews either. In effect, the Jews of Palestine/ Israel will re-integrate the Diaspora in demographic terms: their position in the expanded state of Israel, which will presumably no longer be called ‘Israel’, will not be any better than it is in Diasporic communities worldwide.

Is that tenable? Is that what Israeli Jews want? Israeli Jews need to take a long hard look in the mirror and ask themselves: Beyond words and good intentions, is that what I really want for me and for my family? If Israeli Jews choose this course of action, it will amount to collective suicide. They might as well slit their own throats.

Many liberal, left-wing and ‘progressive’ Jews – some in Israel, some outside Israel, including academics and intellectuals from Israel who, conveniently, have chosen to live outside Israel – advocate the 1-state solution. Such people are the ‘useful idiots’ from the Palestinians’ standpoint. History is full of ‘useful idiots’; usually, they end badly, realizing they were wrong and stupid when it is too late already. Cemeteries are full of sanctimonious, self-righteous, moralizing ‘useful idiots’, who meant to do good but were simply deluded, clueless, naive and cretinous. In common parlance, they are the proverbial turkeys voting for Christmas – and proud of it, too.

The idiots on the Right or Far Right of Israeli politics are of a different kind. They want a 1-state solution too, but a different kind of outcome: they dream of a Jewish State extending all the way from the coast of the Mediterranean to the River Jordan, without Arabs. They dream of eliminating/ expelling/ evicting the Arabs from Eretz Israel. In fact, the current policy pursued in the West Bank, with the settlements, is exactly that, let’s face it: kicking Palestinians off the land they’ve occupied for generations to put militant Jews in their place. The Far Right, in Israel, dreams of a homogeneous Jewish State with no Arabs: to call it what it is, it dreams of ethnic cleansing. It views Arabs/ Palestinians as the problem: without Arabs in Israel/ Palestine, the state of Israel would be a happy place, full of joy and bliss.

Short of committing a large-scale Holocaust of Arabs in Palestinian Territories, this is of course impossible. What will happen in practice is that the expanded state will integrate Arab populations, but they will be second-class citizens. This is the Apartheid model for an expanded Jewish State. The problem is that you can keep the majority down for so long (10 years or 30 years, maybe?), but, sooner or later, also under pressure from the UN, the US and Europe, the Apartheid ‘model’ will collapse, as it did in South Africa and in Rhodesia (Zimbabwe, today). Little by little, Arabs within Israel will be given more rights, inevitably. There may be civil war (riots, etc.) along the way: the Arabs will have to conquer those rights within the new state. But they will. Trust them. Even if it takes them 50 years.

This Far Right Zionist project, therefore, is simply delusional. Many would argue that supporting such a project could be deemed a form of Fascistic thinking, in fact, whereby one denies the right to exist to an ethnic group (the Palestinians) purely for political and ethnic reasons. Such extremist delusions are not only unrealistic and dangerous, as well as stupid; worse still, they can only lead to disaster, because the ‘solutions’ such bigoted, blinkered and intolerant individuals support will never work, and cannot work. A 13-year-old boy with half-a-brain can see it. They can’t. Such is the power of self-destructive, ideologically driven delusions. History is full of maniacal extremists who ended badly; usually, they cause mayhem and a bloodbath, but they take the others around them down with them. It is rarely pretty and joyful. No need to name names, here: just look at the 20th century for inspiration.

At this point, it is clear that the so-called 1-state solution, whether it is supported by the liberal Left or by the reactionary Right (or Far Right) in Israel, is a non-starter. It is a delusion. A delusion based on misleading, wishy-washy notions of ‘fairness’ and ‘democracy’ in the case of left-wing individuals who support it; a delusion based on insane, intolerant ideas of ethnic cleansing and extreme nationalism in the case of right-wing politicians and their supporters. Whichever way you look at it, the 1-state solution can only lead to the end of Israel as a Jewish State, i.e. the end of Israel, period.

The problem, of course, is to find Palestinians who would be capable of setting up their own state, and a functioning political entity alongside a safe Jewish State. The new state would need to offer extensive security guarantees to the Jewish State. The Old City of Jerusalem, most probably, would need to be put under international administration, but some diplomatic and administrative contortions should make such a thing entirely feasible, with a bit of good will and imagination.

Inevitably, the new Palestinian State will most probably be corrupt and dictatorial, as this seems to be the default-position in the Arab/ Muslim world, and if one looks at the record of Hamas in the Gaza Strip or the Palestinian Authority in the West Bank. But that is a problem for the Arabs to sort out. It is not for Jews to try and help, lead and educate Arabs in any way. If Arabs, in the new Palestinian state, prove to be politically, terminally backward and incapable of running their own affairs properly, this will be unfortunate, but it cannot be helped. No doubt, the international community, the monarchies of the Persian Gulf, the USA and the EU will assist the new Palestinian state, also financially, so that it will manage to somehow get going. There is no reason why it couldn’t be, in that sense, ‘successful’, if the bar is placed low enough.

The geographical split between Gaza and the West Bank is also another false problem: it would be enough to build a raised motorway-cum-high-speed-railway-line on stilts, from Gaza to the West Bank, along a designated corridor, and the problem would be solved overnight. And to those who might giggle and deride such an idea as preposterous, once more, they should look at recent history: this is exactly the arrangement there was between the territory of West Germany and the city of West Berlin, right through the Cold War – an umbilical cord that connected the western part of Berlin to West Germany overland and without any difficulties, crossing the territory of what was then East Germany. It has been done. It could easily work. Distances are short in the Near East: politics and religion are the problem, not geography, here.

And to those who say that Israel could never be safe with a Palestinian state alongside it, precisely because of the constraints of geography, i.e. how small and vulnerable the territory of the Jewish State would be, the simple answer is: as it is, the state of Israel is not safe, and it will never be safe so long as the rights of Palestinians are not recognized and taken on board. It is precisely in order to be safe (and democratic) that the Jewish State needs to disengage from the policy of colonization in the West Bank and to allow the emergence of a self-governing Palestinian state. Negotiations will be very difficult and very lengthy, and there must be some red lines for Israel – for instance, the Right of Return can only apply to the Palestinian state, yet to be created – but a compromise is clearly conceivable, with a modicum of good will and good faith.

Where do we go from here? Alas, I am quite sure the worst possible solution will be chosen for the future of Israel… Why? Because it is unlikely reason will prevail in the face of delusions and passion. There are enough idiots and extremists around in both Israel and the Palestinian Territories to ensure that the worst possible outcome is secured, causing violence, death and misery in the process for all those concerned.

About the Author
Philip has worked in translation, journalism and PR, in England and France. He has been following international news for 45 years.
Related Topics
Related Posts
Philip Jolly