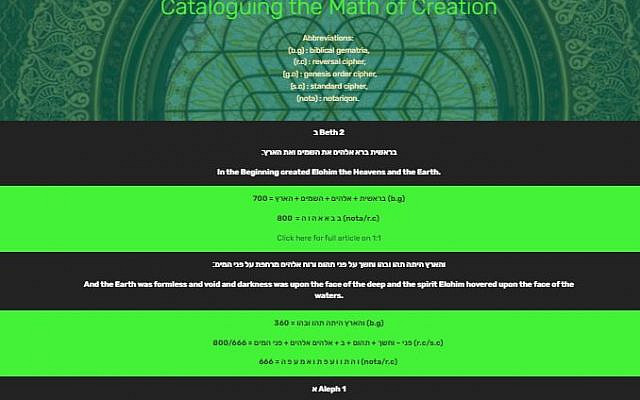 Welcome back to my blog about Gematria, the Merkabah, and the Birth of the Alephbet.

It’s been a while, and I’ve been busy with VR game development, but I took a break recently to finish working out the gematria of Brashith 1-2, and rather than write a book about it I’ve put it online and made it freely available. It’s the culmination of several years of decipherment, and the calculations for all the verses have been set out on a webpage on my Shematria site. I hope that it will provide insight into this ancient system of Hebrew mathematics that was employed by the Patriarchs to clarify and categorize their writings.

The presentation doesn’t include an exegesis of the verses, either of the symbolism of the numbers and their relevance to the text, or of the math system being used. I’m leaving it up to the reader to engage with the gematria and consider its implications for exegesis, after reflecting on the midrashim. As for the math system, this is something that I explain in my book “Behold! The Art and Practice of Gematria” – and I should mention that I am no longer self publishing this work but Aeon Books is planning to publish it worldwide in September, and its available to pre-order from Amazon. In the meantime, you can learn a great deal about this formal system of literary and rhetoric math by studying the composition of the calculations in Genesis 1-2, and paying special attention to the words that have a set value. Another thing to observe is how the verbs and prepositions function to instruct different types of calculation.

As I was working on the text there were a few surprises. The verses for the Teth turned out to be more like a shopping list, with the flagword ‘Behold’ being used to indicate a specific category (food). Also, two of the calculations for the Tav (time) gave the sum of 432, but I didn’t understand the significance of this number to the scribes at first. It puzzled me deeply. Israel dwelt in Egypt for 430 years, but that’s off by 2 years. 432 = 9 x 48, but what is the significance of 48?

There may be an answer to that in Halakha. Searching through Sefaria for clues, I’ve found that 432 is the number of eggs in an האפה Eifah. Halakha says: “…one-tenth of which is forty-three and 1/5 eggs, and that is the measurement of dough that obligates [the separation] of challah”. It also remarks “A baker who prepares his [dough] for sale in the market – and [the dough] is large, and he also needs to make a profit – was only obligated to give 1/48th.” You may be asking, what has this to do with Time? But the key to this is that the Tav is also a letter for measurement, which is why it says “for signs and seasons and for days and years”. One tenth of an Eifah is an Omer, and Moses told Aaron to put an Omer’s worth of Manna into a pot and set it before YHVH for generations.

Another surprise to me as I was working with the text was the verses for the letter Samekh, and the four rivers flowing out of Eden. With the initial value of 700 for the first verse, followed by 480 for the notariqon of the next 4 verses, it seems to me that the rivers partake in some fashion of the qualities of the Holy Name and its sectors on the Seven Palaces.

One thing that did not surprise me, but was a great help during the calculations was that the scribe sought to include the relevant words which have a set value for a letter with each letter. Thus we see ורוח has the value of 2 for the Beth in the first two verses, and רקיע has the set value of 3 for the verses of the gimel, and היבשה has the value of 3 for the shin, and תדשא has the value of 4 for the verses of the daleth, and so on. This works to verify the order of the alphabet as it is presented in Genesis, as well as giving us firm foundation to understand the original themes the letters were associated with during the Bronze age.

I’d like to thank all the people that have prodded and encouraged me to finish deciphering Genesis 1-2, with a special shout out to a reader of this blog (E.C.) who was most persistent on the matter. Until next time, have fun and stay tuned for more numerical honey!

About the Author
Bethsheba Ashe is the creator of the popular online Shematria Gematria Calculator, and a member of the American Cryptogram Association as well as being the current Grand Master of the Sanctum Regnum. She has spent the last seven years in research into the formal system of gematria, culminating in the publication of her most recent book "Behold! The Art and Practice of Gematria" which is available at Amazon, Lulu and other outlets.
Related Topics
Related Posts
Bethsheba Ashe