Welcome back to my blog on gematria, the merkabah and the birth of the alephbet.

Today I’m going to discuss the gematria of the Shemhamphorash, which has the largest significant gematria number I’ve ever discovered.

The Shemhamphorash is pretty famous. It is a component to the magical practices in the Lesser Key of Solomon, and it is located in the verses of Exodus 14:19-21. It means the explicit name, describing a hidden name of God.

The verses translate to say:
19: “And moved the messenger of Elohim who went before the camp of Israel and went behind them and went the pillar of cloud before them and stood behind them.”
20: “And it came between the camp of Egypt and between the camp of Israel and the cloud and darkness and light + the night and not came near this to this all the night.”
21: “And stretched Moses his hand on the sea and made go YHVH + the sea by a wind east strong all the night and made + the sea into the dry and divided the waters.”

The Shemhamphorash is also called the 72 fold name. Tradition has it that Moses said this name to part the waters of the red sea.

In total these three lines have 216 letters and each line is composed of 72 letters. The Golden Dawn and Aleister Crowley followed a method first described by Rashi to divide the verses into 72 parts. They took the middle line (line 20) and reversed it, then took a letter from each line to create a three lettered name of an angel or messenger:

They then added a suffix of (אל) AL or (וה) IH to each resulting in a five lettered name of an angel. John Reuchlin (whom influenced Agrippa) found significance in the fact that 72 was the sum total Y + YH + YHV + YHVH.

Naturally I am deeply skeptical about this practice of finding 72 angels in the text. I think it is something imposed upon the text rather than something that was deliberately put there by the scribal author. While there are spirits or angels in the Tanakh, these tend to be the spirits of the 22 letters. Nevertheless, the fact that the Shemhamphorash can be divided into 72 parts has meant it has been widely re-purposed to occult practices.

It has been projected around the wheel of the Zodiac in seventy two units – each composed of five degrees of the 360 Degree Zodiacal band – and thus arranged it was possible to attribute the name of an angel to a person depending on their time of birth. This practise ignores that fact that (according to the Tanakh) astrology was not practiced in ancient Israel during the First Temple period. The 72 fold name has also been employed in Talismanic Magic. This practice ignores Deuteronomy 18 which says “Let no one be found among you who…is an augur, a soothsayer, a diviner, a sorcerer, one casts spells.” In the Golden Dawn tradition the Angels of the Shemhamphorash took on a Christian spin. The Angels took the form of seventy two rays which emanated from the Crowns of the Elders of the Apocalypse, and they constituted the divine keys to the twelve Gates of Heavenly Jerusalem. Some magicians created 72 signals and 72 invocational psalms were attributed. Aleister Crowley added the four letters of YHVH to the 72 fold name and attributed them to the 78 cards of the Tarot.

The fact that Rashi reversed line 20 is extremely interesting however, and I wondered where the inspiration to do that came from? Could it be (I reasoned) that these lines were originally calculated with the Reversal Cipher? This is the reversal cipher:

Could it be that Rashi was leaving us a hint when he detailed this extraordinary practice? Of course, at first I tried adding the top and bottom lines together with biblical gematria and using the reversal cipher for the middle line, but I found nothing significant. It was when I calculated all 216 letters that I found the sum with the reversal cipher:

So Rashi had been leaving us a clue! And the word for nine thousand in hebrew is: חתתר which has a biblical gematria value of 216. That’s not all there is to it however. It is obvious by the sentence construction of Exodus 14:19-21 that there is gematria within the verses as well as computationally by every letter.

In the first verse there is a calculation for 1400: 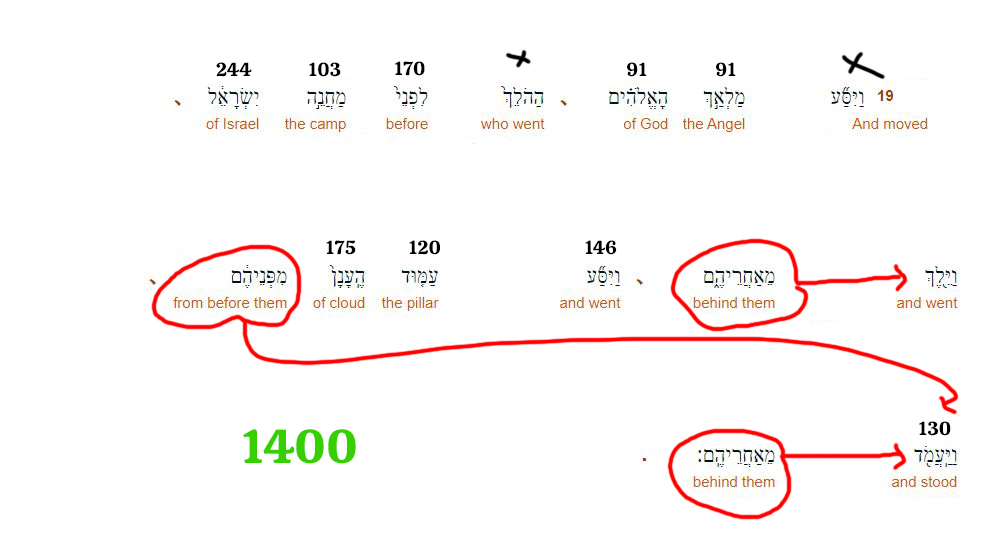 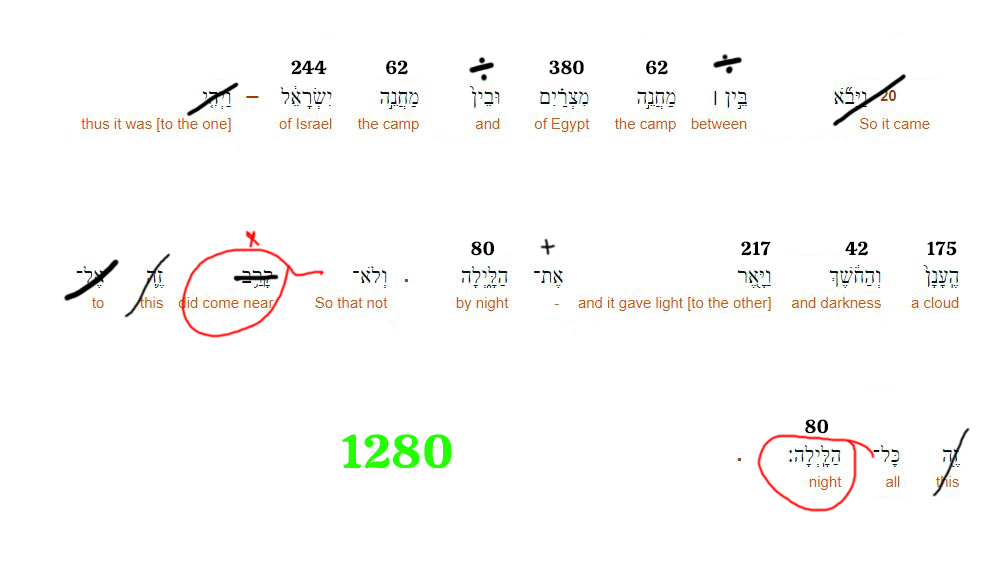 And in the third verse there is a calculation for 1100 (“and were divided” is another mnemonic with the value of 2): 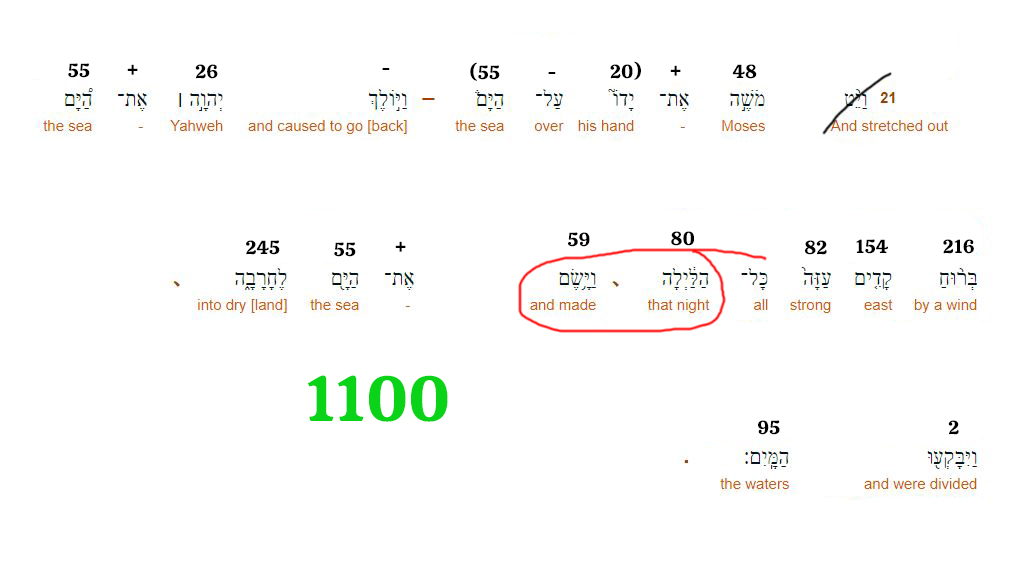 I’m not exactly sure what the intent of the scribe was in producing these very large calculations and its something I intend to meditate upon. It may possibly have to do with the “wall” (50) חֹמָ֔ה of water mentioned in verse 22 given that 1300 + 1400 + 1200 + 1100 =  5000, but at the moment I’m not sure what the spare 80 for “the night” has to do with it all. It might be that the scribal expectation was that we would subject the entire chapter to analysis for those insights, rather than just cherry picking these three or four verses.

Well that’s it for tonight. If you see anything you think I’ve missed please let me know. My email is on the Shematria website, and I shall be adding these calculations to the database tomorrow. Many thanks to Porfle Popnecker for uploading his compilation of famous “Moses parting the red sea” movie clips. If you enjoyed them as much as I did please give the video a like on Youtube. I wish you all a very happy Hanukkah, and as usual – stay tuned for more numerical honey.