We were exploring the grounds of Agatha Christie’s home at Greenway in Devon when a text arrived from a first cousin joyfully announcing his wife had given birth to a son. It was an emotional moment, not just because this was a first born late in life to my cousin but because it would be named Alexander.

My pleasure was not some narcissistic moment but a recognition that the memory of my grandfather, Sándor Brummer (z’’l), was being honoured and memorialised for the fourth time among my Brummer cousinhood. My father, a refugee from the Shoah, his two sisters and niece – Auschwitz survivors – all have offspring or grandchildren with the same English and Hebrew name.

None of us had the privilege of ever knowing Sándor. In June 1944 he alongside my grandmother Fanya my two aunts, an uncle, first cousin and other family members were herded into cattle trucks in their home town on the Hungarian-Czech border (now in the Ukraine) and shipped off to the death camps. As they left the town where the family had lived happily for many years as dairy farmers, traders and talented seamstresses they begged for water. Instead, their Hungarian neighbours proffered bags of salt.

When the train eventually stopped at Auschwitz, after a gruelling journey, my grandparents were separated from the younger member of the family and shipped off to the gas chambers and crematoria. That was the last that was ever seen of them.

Over the years I have pieced together a picture of Sándor – Alexander – as family memories have been shared. As time has passed on and the survivors grown old sharing the memories of their beloved parents became and has become ever more important.

Indeed, so vivid has the memory of Sándor become that on the first of several visits to Auschwitz, as I stood to recite Kaddish on a rain and windswept day, I had a vision of my grandfather standing next to me, in his long traditional coat, his red beard swaying in the wind. The ginger gene is a shared inheritance for my late elder brother Martin, my two sons, cousins in England and in Israel and a grandson.

There was much more to Sándor. His life as a farmer and a life of getting up at the crack of dawn, in fearsome mid-European winters, had taken a toll on his health.

On Shabbat afternoon, in spring and summer, my grandfather would sit under a peach tree at the side of the house and read Bible stories to the younger children.

Later in the day he would study from sacred books with his sons. Occasionally they would travel on Shabbat to nearby Uzhhorod where my uncle, Cantor Philip Brummer (my father’s elder brother), would perform in the great shul before he moved west to Pressburg (now Bratislava) to yeshiva and formal chazanut training.

In the evenings in the old family home my grandfather would gather friends around him. They would sip schnapps, distilled from local cherries and peaches, and play draughts and card games for small amounts of money.

The card playing and gambling gene was always a part of my late father Michael’s life.

One of the early lessons from my father was that in business and in life there is nothing more important than preserving the integrity of a name.

As it states in the book of Proverbs:  ‘A good name is preferable to great riches.’ When Eichmann arranged for the hurried killing of Hungary’s Jews – some of the last to be shipped off to the death camps – he had hoped to wipe the names of Jews like my grandfather Sándor from the face of the earth.

Instead, across the world from London to Israel and Columbia in South America his name Alexander lives on in the new life of a great grandson and descendants across the continents.

He may have died prematurely at the hands of evil but the golden chain in his memory lives on. 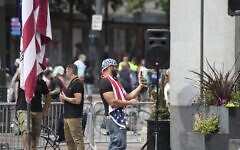