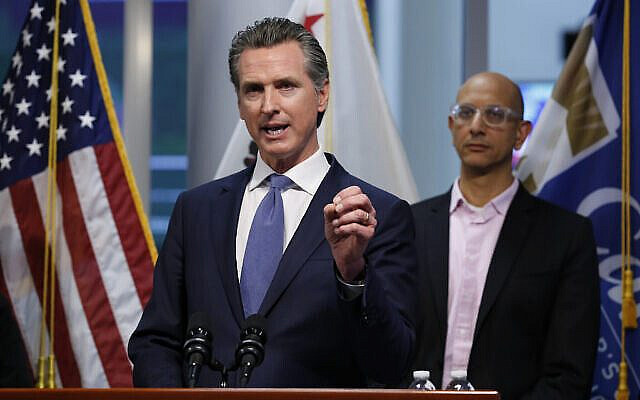 Nefarious forces in California are working behind the scenes to lobby the 1300 school districts as they promote the teaching of an Ethnic Studies Curriculum that is laced with anti-Semitic and anti-Israel material.  Governor Gavin Newsom has until October 10th to sign or veto Assembly Bill 101 which requires the teaching of Ethnic Studies in schools throughout the state, a bill which has no effective means of ensuring that the subject is taught in a manner that will not marginalize Jewish students or students of any background.  A rabbi in Sacramento sent a personal letter to the governor pleading with him to veto AB 101.  The text of the letter is below.  For those who wish to join the effort in opposing AB 101, email the governor at leg.unit@gov.ca.gov

I wish you could have walked in my shoes when a parent called me and asked me to attend a meeting at her child’s elementary school because the child was subjected to anti-Semitic bullying.

I wish you could have walked in my shoes when the Jewish Day school I headed was subjected to almost two dozen swastikas and hate messages painted on the outside walls of its building.

I wish you could have walked in my shoes when the Jewish community in Sacramento was the target of two hate-filled brothers who attempted to burn down three synagogues in the middle of the night.

I wish you could have walked in my shoes when Jewish students from my congregation were traumatized, finding a large swastika painted on their high school’s baseball field.

If you could have walked in my shoes, you would have felt the pain and anguish of children and parents who have personally experienced anti-Semitism.  And, I am sure you are aware that the alarming number of anti-Semitic incidents in California has increased by more than 40% over the last five years.

Governor Newsom, I share these examples with you to plead with you to veto Assembly Bill 101 which if signed into law, will only foment hate and division within California schools and in our communities.

Governor, I want to remind you that the writers of the California Ethnic Studies Model Curriculum produced the first draft (which you yourself said was so offensive it “would never see the light of day”), and they refused to sign off on the fourth and final draft approved by the State Board of Education in March 2021.  They subsequently established their own organization called the Liberated Ethnic Studies Model Curriculum Institute.  Their curriculum resembles the first draft filled with anti-Semitic and anti-Israel material—the draft which was rejected by the State Board of Education.  If you go to their website, you will notice that front and center is a long statement that is clearly anti-Semitic and anti-Israel.  They are also vigorously lobbying school districts throughout our state to implement THEIR version of an Ethnic Studies Curriculum.  Already, school districts in Hayward, Salinas, San Diego and Daly City have agreed to work with members of the “Liberated” in implementing Ethnic Studies in their schools.

Governor, I know that before AB 101 was passed and sent to your desk, that an amendment (see Section 1: vi) was added to place guardrails in the legislation. While I am not a lawyer, I appreciate that the legislators in Sacramento (including members of the California Legislative Jewish Caucus) added the “intent” clause.  But the guardrails in the “intent” amendment will not prevent the anti-Semitic laced first draft of the curriculum from being implemented in schools.  While I understand that courts do look at legislative intent, particularly if it is explicitly stated in a bill, it is doubtful this will ever get to a court and the advocates for the Liberated Ethnic Studies Model Curriculum will continue to promote their agenda. The Jewish community simply does not have the bandwidth to monitor every one of California’s 1300 school districts.

Governor, let me be clear.  I have no issue with the teaching of Ethnic Studies. IF it will be done in a manner that will not marginalize students or make any student feel “less than.”

There is a saying:  “As California goes, so goes the nation.”  If AB 101 is signed into law, it is probable that other Ethnic Studies Curricula with a similar ideological bent to the “Liberated” version will be introduced in state legislatures throughout the country. That will be a harbinger for more division and hate.

Governor Newsom, hundreds of Holocaust Survivors and their descendants asked you.  Thousands of citizens and supporters of the California Jewish community asked you.  The Los Angeles Times Editorial Board asked you. Now, I sincerely ask you.  Please, please veto Assembly Bill 101.