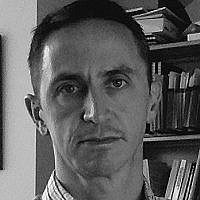 The Blogs
Richard E. Ford
Apply for a Blog
Advertisement
Please note that the posts on The Blogs are contributed by third parties. The opinions, facts and any media content in them are presented solely by the authors, and neither The Times of Israel nor its partners assume any responsibility for them. Please contact us in case of abuse. In case of abuse,
Report this post.

Jimmy Carter, on the Charle Hebdo massacre: Well, one of the origins for it is the Palestinian problem. And this aggravates people who are affiliated in any way with the Arab people who live in the West Bank and Gaza, what they are doing now — what’s being done to them.

Robert Wright: The Fort Hood [Texas] shooting is an example of Islamist terrorism being spread partly by the war on terrorism—or, actually, by two wars on terrorism, in Iraq and Afghanistan.

Edward Said: The problem for the world today is how to deal with the unparalleled and unprecedented power of the United States…

This is the grandiose view. There is an overriding cause to global chaos. That cause is us.

The grandiose view states that we – the West, generally, and America specifically – meddle and cause disorder. The chaos and senseless violence we see around the world is just rational reaction to our policies.

We are to blame. We act, the world reacts. The world revolves around us. Thus this view is grandiose.

When it comes to terrorism, the grandiose view states simply that we – the United States, especially – are responsible for the terrorism visited upon us: Our policies provoked the attacks on our country and citizens. We over-reached, we always over-reach. And the people most traumatized and most humiliated by our over-reach, struck back at us.

We thus control how much terrorism we face. If we step away from our foolish policies, terrorists will leave us alone. If we stop coddling Israel, if we stay out of regional disputes in the Middle East, if we lift sanctions, then we take the target off our back.

But the debate is older than that. These are debates that animated Albert Camus, writing in the 1950s about the irrational, recurring, and world-shaping appeal of mass movements that value suicide and murder above all other values. This is the nightmare that plagued George Orwell. The arousal inherent in the exercise of power. The irrational human lust to dominate for the sake of domination. The persistence of political evil.

Orwell and Camus embraced irrationality. They did so in order to describe reality. They saw the destructive power of irrational mass movements all around them. To use only rational assessment to understand the rise of fascism, or Stalinism, or the bloody embrace of authoritarian anti-colonialist movements, that would have been absurd. A retreat from reality.

For Camus and Orwell, the purported root-causes of irrational mayhem – the manufactured grievances of, say, fascist dictators – were nothing more than the manipulation of history and the use of lies to build power. To blame the behavior of Jews for the rise of Nazism, to blame the killing fields of Cambodia on the conduct of professionals and middle-class moderates, to blame the Ukrainians for the starvation visited upon them by the Soviets, this would have been outlandish. Who but a functionary in the official propaganda organs would even say such things, let alone believe them?

Yet, the grandiose view persists. It looks around and sees a modern world thrown into chaos by the behavior of liberal democracies, especially the United States.

The grandiose view persists because it is profoundly seductive and reassuring.

It may, at first, appear the opposite of reassuring. It may at first appear to be an invitation to self-flagellation. It looks like we are diminishing our own stature by assigning the blame to ourselves.

But blame is also responsibility. And responsibility is power. And the grandiose view comes down to this – because we are to blame, we have the power. Because our policies created the current outcomes, that means outcomes hinge on our policies. Change the policies, change the outcome. The world is a rational place. The seeming irrationality of the world is a mirage. Beneath the surface, this whole time, was a simple equation, awaiting discovery by rational minds.

Irrationality is a mirage. This is a key premise of the grandiose view. Why this tribal genocide, or this sectarian massacre, or this artist murdered in the streets of Amsterdam? It is the inevitable legacy of colonialism and racist slights, or the policies of international banks, sometimes the manipulations of the CIA.

In the January 2014 edition of the National Journal, John J. Mearsheimer wrote “America’s interventionist policies are the main cause of its terrorism problem.” This wasn’t Mearsheimer’s entire point, of course. But if you think I am exaggerating about the extent to which the grandiose view sees America as the key progenitor of international chaos, you might want to read the article for yourself.

Mearsheimer’s views occupy the space where the political spectrum wraps around in a near-circle, and the Left-wing and Right-wing edges are closer to each other than either is to the center. He bemoans attacks on civil liberties in the name of the war on terror. He doubts the seriousness of terror threats and he is outraged by what he sees as surveillance for surveillance sake by an out-of-control national security state. Mearsheimer likes that term, “national security state.” A term embraced by both Noam Chomsky and Ron Paul.

And though Mearsheimer is often described as a conservative, his views rest more easily on the Left. And not just his hostility towards Israel. For instance, Mearsheimer suggests the money saved by a military pull-back could be spent “on education, public health and transportation infrastructure.” I doubt Ron Paul would approve.

Mostly Mearsheimer restates the grandiose view of chaos in the Middle East. In Syria, the appalling civil war stems from America’s missteps. In Egypt with Morsi, the United States “facilitated his overthrow.” Strong words, that the U.S. “helped overthrow” Morsi. It would be useful for Mearsheimer to tell us what the hell he is talking about. He doesn’t.

A long, bad year for the grandiose view

There was the January 2015 massacre of the cartoonists and satirists at Charlie Hebdo. A tragedy in itself, it also pulled focus on the repeated death-threats and actual murder of European intellectuals, artists and journalists who got themselves sideways with Islamists.* And more notice was given to the previous five years of deadly Islamist suicide bombings and firearms attacks on civilians in Sweden, Germany, France, Bulgaria, and Belgium.

It is hard to find the rationale for the murder of museum-goers and sight-seers. Perhaps the museum-goers hailed from nations that had done something to offend.

Certainly, the editorial staff at Charlie Hebdo had done much to offend. That said, the cartoon provocations in that magazine were well within the boundaries of normal free speech. We might point with distaste at some of the content of that speech. But, with a shrug. After all, it is free speech. A core value of liberal democracies.

And then of course there is Nigeria. In the grandiose view, U.S. policies were responsible for 9/11, and the London bombing were a rational response to England’s support for the U.S., and the Madrid bombing were triggered by Spain’s participation in the second Iraq war, and murder and mayhem in Israel is caused by an endless litany of offenses. But what did the Nigerians do?

In 2014, almost 8,000 Nigerians were murdered by Islamists. Worldwide, Nigeria was second only to Iraq in the number of non-combat related civilian murders committed by Islamists.

These Nigerians, what was their offense? In the grandiose view, Islamism in particular, and terrorism in general, are a rational response to the policies of states. Yet it would be laughable on its face to suggest a connection between Nigerian state policy and the Islamist massacres of Nigerians in 2014.

These past sixteen months also exposed the lack of intellectual curiosity at the core of the grandiose view. It isn’t interested in the details. It shrugs off the statements from ISIS that it’s mission is to use modern means to help reestablish a 7th Century caliphate, complete with slavery, the conquest of all other states, and the worldwide imposition of Sh’ria. The grandiose view squints at the murder of museum goers in Tunis, and the massacre of Christians in Libya and Egypt, and mass slaughter in a Kenyan university, where Christians are parsed-out for execution. Just more of the legacy of colonialism and imperial misadventures. It is our fault. We can make it better by retreating.

The grandiose view’s fiction is even more absurd, that somehow if we avert our eyes, the beast will stop being ravenous.

*Islamists, adherents of Islamism, a political movement based on Islam (with what fidelity, I can’t say).

About the Author
Richard E. Ford is a communications specialist in Washington DC with a keen interest in Israel, and an abiding belief that small facts are more useful than big narratives.
Comments